'Reversing' the symptoms of asthma

A compound originally designed to treat leukaemia could also be effective in preventing asthma. 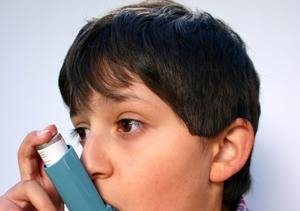 UNSW researchers have developed a compound that has had a surprise result: being effective in the prevention of asthma.

The compound was originally developed to treat leukaemia.

The research, led by the University of Newcastle, has been published in Nature Medicine. It centres on the role played by two proteins in the lungs in causing asthma attacks.

When they come into contact with the common cold virus and dust mites, the two main asthma triggers, they work together to produce a series of events that cause an attack.

The research shows that the UNSW-developed compound is able to activate a protein that is suppressed during asthma. This could mean that in the future doctors would be able to treat the cause of asthma, not just the symptoms.

“Asthma is one of the major diseases of the developed world. It’s very rare to find a compound that can reverse the symptoms of asthma,” says Dr Anthony Don, who started working on the compound in the treatment of acute myeloid leukaemia.

“The important thing with this compound is that it’s not just alleviating the symptoms, it’s hitting at an underlying disease mechanism,” says Dr Don, a team leader at UNSW’s Lowy Cancer Research Centre.

Associate Professor Jonathan Morris from the School of Chemistry synthesized the compound.

The development is also significant because asthma attacks are currently treated similiarly regardless of whether they are caused by viruses or allergens, but virus-induced effects are much less responsive to current therapies.

Although this compound is not being commercialised, drugs with similar properties could be developed in the future for clinical use. The compound could also be used in the treatment of other inflammatory diseases.

For the full media release, go to the Hunter Medical Research Institute.