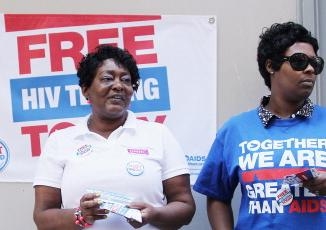 OPINION: The tragedy of Flight MH17 had an additional pall, the immeasurable loss of leaders in the cause of ridding the world of HIV and AIDS.

The 20th International AIDS Conference will be engulfed in gloom but it will continue: it has to, because thousands still die each day of AIDS. What MH17 will do is focus delegates’ attention even more acutely on that terrible suffering, and what needs to be done to stop it.

That is summed up in the Melbourne Declaration, an emphatic statement that stigma and discrimination remain the most substantial barriers to conquering HIV and a plea to governments, law-enforcers and all with influence to enact an enlightened, anti-discriminatory approach to HIV.

That is not to say that scientif­ic, logistic and financial solutions are no longer relevant to addressing one of the worst epidemics in human history.

It is to stress that no matter how good the science of prevention, diagnosis and treatment, if large swaths of the global ­community remain isolated through fear and ignorance, then an effective response to HIV is ­impossible.

The Australian experience is proof of this. Virtually from the start of the epidemic, we realised that tackling discrimination was essential.

Social and legal change went hand-in-hand with an aggressive health and medical research response. Activists teamed with researchers and academics to ensure the predominance of a ratio­nal human-rights approach to HIV prevention.

Activists from the gay community demystified the public image of HIV and AIDS, addressing misconceptions about the disease. Alongside laws enabling needle and syringe programs, laws specifically addressing discrimination against gay, lesbian, bisexual, transgender and intersex people were legislated. The result is that Australia has one of the lowest HIV prevalence rates in the world.

What would things have looked like had we missed one of the high-risk communities?

The US response probably provides the answer. Its approach to the HIV crisis was solid but with a glaring omission.

Injecting drug-users were largely ignored. The prevalence of HIV in the US is four to five times higher than in Australia.

We now have an estimated 30,000 Australians living with HIV, most on lifelong antiretro­viral therapy.

The US example tells us that had we not adopted harm-minim­ising strategies for injecting drug-users, this figure would most likely be upwards of 120,000 — a huge additional economic cost (lifelong therapy is expensive) to go with the burdens of isolation, sickness and death.

Not only is it a basic right for every person to have equal access to HIV prevention, treatment and care strategies, it is a myth to think that any high-risk group is separ­ated from the community.

Men who visit sex-workers often go home to girlfriends and wives. As do many men who have sex with other men. Injecting drug-users are often mothers who transmit HIV to their babies. And so on.

Unchecked, HIV spreads to the wider community, leading to prevalence rates that can be upwards of 10 per cent of the population. Of the 35 million people living with HIV around the world, more than half are women and children. Adult women are the largest HIV-positive group.

In some countries, it is commonplace for funds to be misdirected to the general population or relatively low-risk groups. An inability to target high-risk groups engaged in activities deemed illegal — such as sex workers, drug-users or prisoners — underpins this inefficient approach.

The Melbourne Declaration has been signed by some of the world’s top HIV scientists and by global personalities to rebut the common misapprehension that AIDS is just another disease.

While the global gains have been impressive, AIDS is not over. In Africa, parts of Asia, the Caribbean and Russia, AIDS is a daily presence for millions. It remains a major threat to many countries and drives epidemics of other diseases, notably tuberculosis.

In many countries, HIV is a dominant factor in determining poor health outcomes and keeps individuals, and nations, poor.

Even in Australia, statistics show worrying spikes in new infections. Not all young gay men who know they are at higher risk readily undergo HIV testing. ­Stigma is still a very real factor.

Global adoption of the principles of the Melbourne Declaration is essential if we are to defeat HIV. Without that, no matter how effective and inexpensive the tools become, HIV will remain a major threat to the world’s health.

We can be proud of the political and scientific consensus we have built in Australia. But Australians must remain vigilant at home and strongly engaged in spreading awareness of the global strategies that work. We are all in this together — no exceptions.

Michael Kirby is patron of UNSW's Kirby Institute. Brendan Crabb is the director and chief executive of the Burnet Institute.