Cancer researcher Orazio Vittorio was completing his PhD when a tumour started to grow in his kidney. After an accidental diagnosis at university, an emergency surgery by his supervisor saved his life. 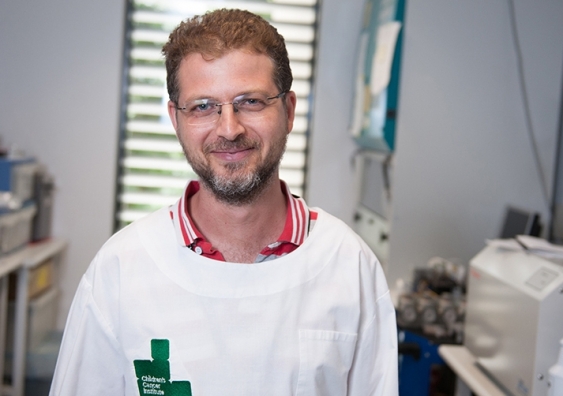 Dr Orazio Vittorio never expected to be a patient in the same hospital he worked at.

A PhD candidate at the time, Orazio – who is now a Scientia Fellow at UNSW Sydney and researcher at the Children’s Cancer Institute – was studying oncology and nanomedicine at the University of Pisa in Italy.

It was here on campus that his own cancer diagnosis happened by accident.

“Hey buddy, can you spare half an hour?” asked his friends working in the laboratory next door one afternoon. Orazio remembers the day clearly; it was 2pm on a Friday, one year into his PhD.

His colleagues were researching new diagnostic protocols for monitoring cancer. As part of this, they were using an ultrasound machine to reconstruct images of internal organs. They asked Orazio to stand in as a test for the ultrasound. He agreed to help them out.

When the ultrasound showed up with a mark in his kidney, they advised him to go straight to the hospital next door for a CT scan.

“They saved my life,” Orazio says. “I didn’t have any symptoms. I had no idea I was sick.”

Orazio’s lack of warning signs is common with kidney cancer. These tumours are usually only discovered after blood is found in urine. By this stage, they can be large, aggressive, and too hard to fight.

Fortunately, the CT scan showed that the tumour was small enough to be removed. It was lucky they caught it early.

“Science saved my life,” he reflects.

“My PhD supervisor removed my tumour,” Orazio says, laughing at the absurdity of it now.

Orazio has been having regular check-ups since the tumour’s removal in 2009. His last follow-up was in November last year.

He is now ten years cancer-free.

A time of struggle and learning

Orazio remembers the fear and uncertainty he felt during his cancer treatment.

“It was a very difficult time for me, psychologically and physically,” he recalls. “I was very scared.”

The physical pain was hard enough: to remove all traces of the tumour, the medical staff decided on open surgery. This required cutting through muscles in his back.

It was a painful procedure. Today, he has a scar stretching from the front of his stomach to his back.

In ways, the emotional pain was worse.

“I saw so many people suffering and dying during my time in hospital. There is no justification for cancer.”

One memory was particularly painful.

Orazio befriended the patient sharing the room with him. Both weak and not able to move around much, they spent almost three weeks together. Sadly, his roommate passed away a few weeks after Orazio was discharged.

“Since that experience, I became even more determined to fight cancer. I sped up a lot of my work.”

Shortly after his treatment, Orazio turned his focus back to his PhD. He travelled to the University of Dundee, Scotland, to undertake research in pancreatic cancer.

While in Scotland Orazio contributed to ground-breaking research in drugs used for cancer treatment. He worked 12 hours a day and often on weekends.

“It was great to be part of this team, but it was super hard work – especially because I was away from my family.”

Orazio missed his wife, who still lived in Italy. He decided to return home for the remainder of his PhD.

Shortly after returning to Italy, Orazio and his wife decided they wanted to start a family. Their lives were about to change in a big way.

Becoming a father would alter his career direction once more. 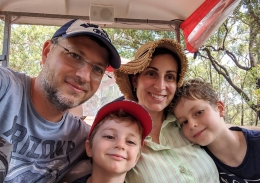 Dr Orazio Vittorio and his family during a recent holiday. Image: Supplied

When his first child was born, Orazio feared that his child may one day go through the same pain he experienced during his cancer treatment.

“I began to freak out. My kids could go through what I went through, or even worse.”

This fear motivated Orazio to direct his research to ending childhood cancer. He believes this is possible.

“We are the lucky generation. We have so much knowledge and technology that we can win this challenge. I’m positive.

“In my opinion, immunotherapy combined with cancer therapy is going to be the real breakthrough.”

While still in Italy, Orazio came across the work of UNSW researcher, Professor Maria Kavallaris AM, who researched the use of nanoparticles for treating neuroblastoma – a type of childhood cancer that develops in nerve tissue. He was eager to learn from Professor Kavallaris, so he applied for the prestigious UNSW Vice Chancellor Fellowship in 2013. He was successful.

Now, as part of Orazio’s work in the Children’s Cancer Institute, he conducts further research on neuroblastoma and gliomas, a type of brain cancer. He is particularly interested in developing strategies to target tumour cells in these cancers.

During his research he made an incredible finding on the relationship between metals and cancer.

It started by him noticing that a drug was only active when there was a high level of copper in the cancer cells. He wanted to ask why.

“I try to follow research plans, but I’m always attracted to the weird results. If something looks strange, I’m going to dig into it and try to understand it,” he says.

After further research, Orazio discovered that by removing copper, the tumour would become visible to the immune system. He hopes this work can contribute to new cancer treatments.

Learning from the younger generation

Last year Orazio became a Team Leader at the Children’s Cancer Institute. He and his team – which includes two PhD students, one post-doctorate student, and one assistant – are working together to learn more about metals in cancer, immunology, and metal-targeted therapy.

He finds that he often learns as much from his students as they do from him.

“Every time I’ve had the pleasure of having students, I become a student too. They are so full of ideas and have a passion for science.

“Sometimes when you get older, you can become focused on your own work, on writing grants and dealing with funding. You can lose track of your real goal. Students can help pump up your own passion.”

Orazio always asks his PhD students to spend time volunteering in hospitals. This helps them understand the importance of balancing long-term work with work that can have real-world impact within the next 10-15 years.

“When you are there in the hospital, when you see kids with tumours, you really understand what this work means.

“It’s fantastic to work on long-term research. But, in the meantime, you have a mission: you must also give something back to society. This means helping the people who already have cancer.”

Orazio has three of his own mentors that he continues to learn from. He also collaborates with people working overseas, at other universities, and in various hospitals.

“When I moved to Australia in 2013, my big fear was that I would be isolated. But it’s been the exact opposite. I’m more connected than I’ve ever been before.

“The key to collaboration is to be honest, loyal, and communicate openly.” 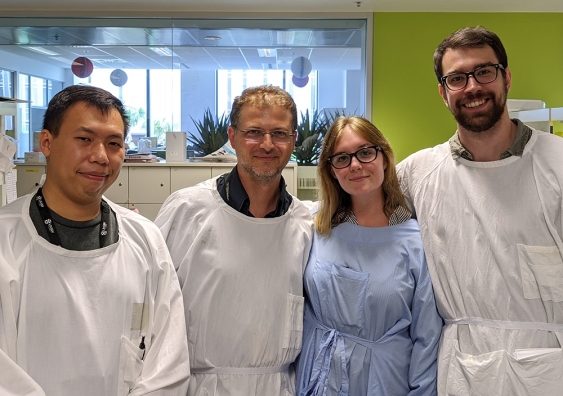 Scientists and community: fighting cancer together

Orazio believes that collaboration doesn’t just end within the medical community. Instead, it’s crucial for medical researchers and the general community to unite and work as a team.

World Cancer Day on 4 February is a perfect opportunity to do just this.

“World Cancer Day is a great chance to bring scientists and the community together to talk, exchange ideas, and fundraise,” Orazio says.

“The Australian community is so strong – they provide so much support. This is crucial with research funding getting smaller every year.”

Often, the public don’t know that they can donate directly to medical researchers. Orazio thinks it’s important to let them know this is an option.

“Scientists need to be aware of their role to engage with the community and share their research,” he says.

“My mentor used to tell me, ‘If you’re not able to explain your research to one person who isn’t a scientist, then you still don’t understand it yourself.’”

Orazio welcomes people to visit his lab and see the research progress. Orazio will take time to explain his findings to them.

“Community and scientists are in the same team. We need to fight together. And we are fighting together.”