Scientists discover method for targeting the ‘Achilles heel’ of neuroblastoma

Australian scientists have discovered the mechanism that accelerates the childhood cancer neuroblastoma and identifed an experimental drug with the potential to stop the disease in its tracks. 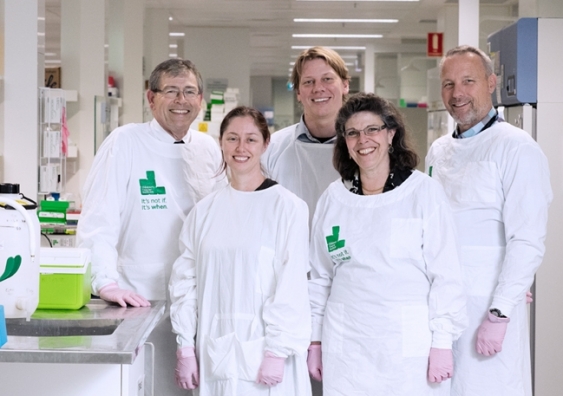 The Children’s Cancer Institute research team has discovered a method for targeting the ‘Achilles heel’ of neuroblastoma (Photo: CCI)

Australian scientists have identified a critical molecular ‘feedback loop’ that accelerates the progression of neuroblastoma, a cancer of the nervous system in children that is triggered in embryonal nerve cells.

The Children’s Cancer Institute research team, based at UNSW’s Lowy Cancer Centre, has also identified an experimental drug, currently in clinical trials for adult cancer, with the potential to interrupt the loop and halt tumour progression.

The team also showed in laboratory models of neuroblastoma that the drug could block the very start of this embryonal cancer, paving the way to possible prevention strategies in the future.

The study, led by UNSW Conjoint Professors Dr Daniel Carter and Glenn Marshall AM from the Children’s Cancer Institute, is published today in the journal Science Translational Medicine.

Neuroblastoma is the most common ‘solid tumour’ of early childhood, and is generally diagnosed when the disease is advanced. Around half of all children with neuroblastoma have aggressive tumours, and fewer than half of these patients survive, even after intensive treatment.

The study found that the drug – known as CBL01371 – used in combination with traditional DNA-damaging chemotherapy agents was much more effective than either drug alone. This was because CBL0137 created a ‘synthetic lethal’ state – by preventing the cancer cells from repairing DNA damage induced by chemotherapy, and so ensuring cell death.

Dr Carter and Professor Marshall focused on the genetic and molecular mechanisms behind the feedback loop, and its interruption by CBL0137.

What is particularly exciting is that CBL0137 does not damage DNA, [or lead to] many unpleasant and serious side-effects that frequently affect children after they are cured of their cancer.

The feedback loop involves the MYCN gene – already known to be a key driver of neuroblastoma – and a molecule known as FACT, a DNA modifying agent, which is the target of CBL0137.

“Our laboratory tests tell us that CBL0137 is likely to be very effective against the most aggressive neuroblastomas, and indeed the most aggressive forms of other childhood cancers, and that is very exciting,” said study co-author UNSW Conjoint Professor Haber, Executive Director of Children’s Cancer Institute and Head of its Experimental Therapeutics Program.

“But what is particularly exciting is that, in contrast to many other chemotherapeutic agents, CBL0137 does not damage DNA, and it is DNA damage that is responsible for the many unpleasant and serious side-effects that frequently affect children after they are cured of their cancer,” Professor Haber said.

The CBL0137 drug is currently in Phase 1 clinical trials for adults. Once the adult trials are completed, a Phase 1 trial for children with relapsed neuroblastoma, and also other aggressive childhood cancers, will open in the United States and at the Sydney Children’s Hospital, Randwick.