Men can significantly cut the visceral fat in their abdomen with just one hour of interval sprinting per week instead of seven hours of jogging for a similar result, new Australian research shows. 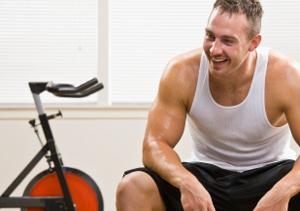 Men can significantly cut the visceral fat in their abdomen with one hour of interval sprinting per week instead of relying on seven hours of jogging a week for a similar result, according to new Australian research.

Just 20-minutes of sprints on an exercise bike, three times a week, is all that’s required, the University of New South Wales researchers found.

“The sprint program, LifeSprints, reduced visceral fat with seven times less exercise time and has a much greater impact on cardiovascular and metabolic health than reductions of subcutaneous fat stores in the legs and arms.”

Men who participated in the research lost two kilograms of body fat, 17 per cent of visceral fat, and put on 1.2 kilograms of muscle in their legs and trunk after the 12-week exercise bike sprints program.

“Other studies using aerobic exercise, such as continuous jogging, have found that the amount of exercise needed to produce a similar decrease in visceral fat was around seven hours per week for 14 weeks,” Professor Boutcher says.

The team of researchers has previously studied the impact of the sprinting program on women, which also showed a significant loss of body fat from stationary cycling for 20 minutes, three times a week.

LifeSprints were also good for those who wanted to boost muscle mass.

“Participation in regular aerobic exercise typically results in little or no gain in muscle mass, whereas moderately hard resistance exercise over months may increase muscle mass. The amount of LifeSprints exercise, however, needed to significantly increase muscle mass appears to be much less,” Professor Boutcher says.

The research was carried out by UNSW Medicine PhD candidate Mehrdad Heydari, with body composition assessment by Professor Judith Freund from St Vincent’s Hospital’s Nuclear Imaging Department. It was funded by Diabetes Australia and is published in the Journal of Obesity.