The world is facing a global health emergency as the rates of mental illness and suicide increase, one of the world’s foremost mental health experts, Dr Tom Insel, has told a packed audience at UNSW’s Wallace Wurth lecture. 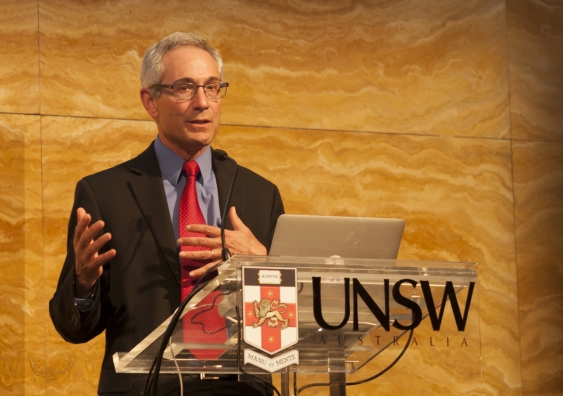 One of the world’s foremost mental health experts has called on the public and media to dedicate more attention to mental illness, saying the current rates of suicide signalled a global health emergency.

Delivering UNSW’s Wallace Wurth public lecture 'Science and Technology: New Frontiers for Helping People with Mental Illness', Dr Tom Insel, a former director of the US National Institute of Mental Health, said around eight Australians ended their own life each day – more than 2,860 people a year, or as many as died from breast cancer.

Globally, the toll was 800,000 lives annually, and 90% of those deaths involved a mental illness, said the distinguished neuroscientist and psychiatrist, who joined Google’s X’s life science division Verily last year.

I just don’t think we have quite recognised the public health crisis that we are dealing with here.

In front of a full house at Leighton Hall in the John Niland Scientia Building, Dr Insel said those numbers became even more staggering if you considered there were around 20 times more suicide attempts than suicide deaths. “That’s an extraordinary number to recognise,” he said.

Yet the public and news media seemed unaware of the immensity of the statistics and what they meant for society and the economy.

“I just don’t think we have quite recognised the public health crisis that we are dealing with here. We have such a focus on terrorism … on homicide … on issues that are much more public, and yet suicide is a larger public health challenge.”

Citing data from the World Health Organization, Dr Insel said the burden of mental illnesses such as schizophrenia, depression, PTSD, ADHD, and eating and anxiety disorders were greater than other medical conditions, accounting for more than 25% of all years lost to disability.

Mental illnesses account for virtually all the disability before the age of 45, more than all the other medical sources put together,” he said. “Seventy-five percent of adults with mental illness will describe onset before the age of 25. So the first thing to realise is these are the chronic diseases of young people.”

In Australia, the crisis among Indigenous youth was a particular challenge, Dr Insel said, citing figures showing Aboriginal and Torres Strait Islanders were four times more likely to take their own life than their non-Indigenous counterparts.

And although attention focused on youth suicide, it was older people, and especially older men, who were becoming increasingly affected.

“Rates of suicide in men over the age of 55 and particularly over the age of 75 begin to climb in a very dramatic way. It’s about six times higher in that age group than it is overall for the population. We don’t talk much about that, but it is an area of extraordinary need and importance,” Dr Insel said.

But there was some good news.

Figures compiled by Suicide Prevention Australia showed youth suicide rates had fallen slightly over the past decade, largely because of interventions to prevent repeat suicide attempts.

And Dr Insel said Australia was leading the way in the “three concurrent revolutions” of neuroscience, genomics, and in technology and information science that could ultimately solve the crisis.

“Today, genome sequencing is quicker, more accurate and cheaper than a decade ago. The improvements have been 10 times better than Moore’s Law,” Dr Insel said, referring to the standard doubling of technological progress in computer chips every two years. 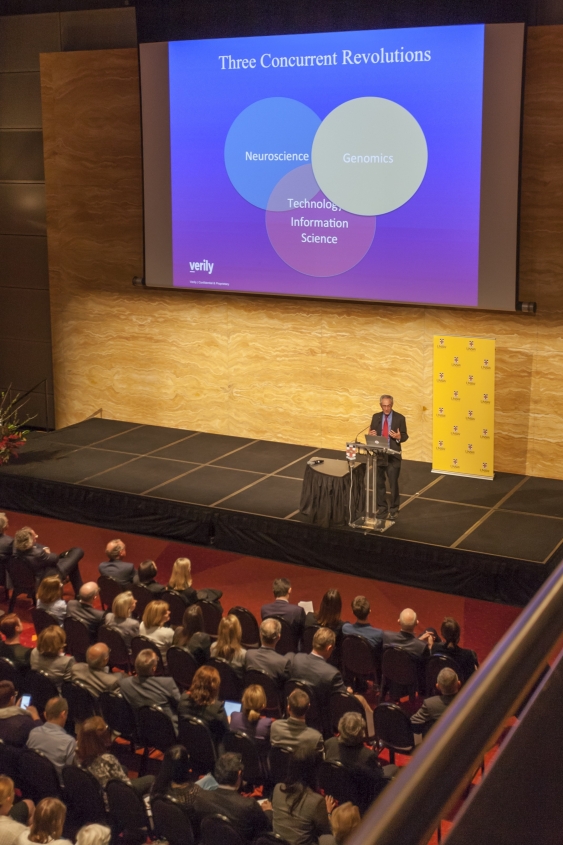 He said from these advances we had learned that our genes revealed risks not causes, that these risks were not as simple as Nature versus Nurture, and that “genes do not follow the DSM”, a reference to the US “bible” of mental illness, the Diagnostic and Statistic Manual of Mental Disorders.

In neuroscience, there had been similar progress in brain imaging and protocols, and the rise of big data analysis had demonstrated that “if you want to do good science, you need to use big numbers”. We had discovered that mental disorders were mostly brain disorders, that circuits mattered, and that individual differences were profound.

Importantly, he said, we had learned that brain plasticity – the organ’s ability to change and adapt throughout life – had given hope that psychotherapies, learning tasks and brain exercises could give great benefit.

Finally, the third revolution – in information science and personal mobile technology – stood as a solution to the last barriers to effective treatment – fragmentation of care, delays in diagnosis, and poor quality of care.

“We know that historically treatment has depended more on the providers’ preferences than the consumers needs,” Dr Insel said.

I wish we had a Black Dog Institute in the US but we don't. Australia is way out in front here... In most other places, in the EU and the UK and in the US, we don't have the public will and the drive to make an impact.

Would smartphones transform mental health care? “There is still so much we don’t yet know,” he said. “We must demonstrate this approach works, and not just create more work... and we need to build trust.”

But, he said, collecting data via smartphones and wearable technology “meant that objective measures of mood, behaviour and cognition were possible for the first time”.

Dr Insel reserved special praise for Australia’s leadership in using smartphones and digital media to combat mental illness and suicide. At the end of a three-week tour of Australia, he said he had realised “the amount of innovation taking place here is really inspiring”.

He singled out the work of the Black Dog Institute and its chief scientist and director UNSW Scientia Professsor Helen Christensen, who is leading a range of suicide prevention trials using online tools, including mobile apps.

“I wish we had a Black Dog Institute in the US,” Dr Insel said, “but we don’t.

"Australia is way out in front here...  In most other places, in the EU and the UK and in the US, we don't have the public will and the drive to make an impact. My hope is that what the Black Dog does and what Helen's project will do, will serve as a leading edge. People will see that impact and learn from it. This could be one of the ways that Australia... changes the way we handle this issue all over the world."

If the information in this article has raised concerns for you or someone close to you, help is available by phoning: