Early intervention programs for young people with mental health issues could save lives, alleviate suffering and save millions of dollars a year, high-profile speakers have told an audience at the UNSW Medicine Dean’s lecture. 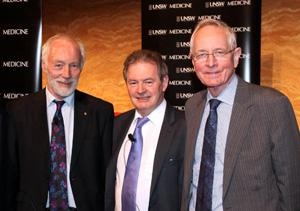 (l-r) Professors McGorry and Farrell with the Dean, Peter Smith

Early intervention programs for young people with mental health issues could save lives, alleviate suffering and save millions of dollars a year, high-profile speakers have told an audience at the UNSW Medicine Dean’s lecture.

The Director of UNSW’s National Drug and Alcohol Research Centre, Michael Farrell and former Australian of the Year, Professor Pat McGorry each called for a renewed focus on children and young people during the event.

“While we need to recognise there are varying degrees of mental ill health and that it is a complex issue, research confirms that early detection of certain contributing factors is possible,” he said.

Professor McGorry told the audience that one in two young people suffer from mental illness, yet only one in five seeks professional help.

“Studies indicate those aged well into their 30s, who suffered mental illness during their youth have a higher chance of major social and professional issues,” said Professor McGorry, the Director of Orygen Youth Health, who is also at the University of Melbourne.

He added that early intervention programs cost a third of standard care, yet so far there are very few implemented.

UNSW Medicine Dean Professor Peter Smith said that mental illness does not discriminate and can affect any household.

The cost of mental illness is estimated to double over the next 20 years and already costs the Australian economy $7 billion a year.

The lecture, The rising tide of mental ill health, suicide and substance use in young Australians: 21st Century Challenges and Solutions, was facilitated by UNSW Associate Professor Gordian Fulde, who is the Director of the Emergency Department at St Vincent’s Hospital.