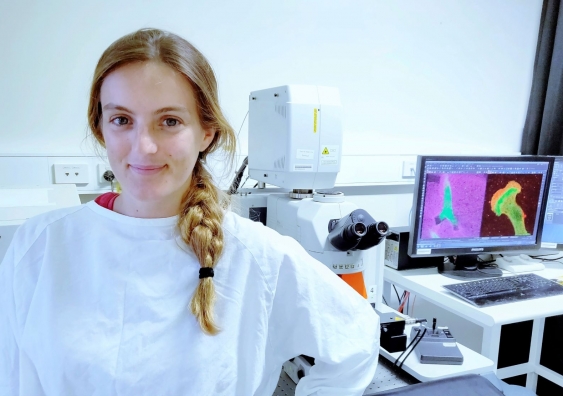 This is the first time scientists have been able to see in detail what the anchor’s chain looks like. Photo: Marco Heydecker.

Most of the cells in our bodies – be they bone, muscle or pancreas cells – are locked into the right place with the help of tiny anchors (called ‘focal adhesions’). These strong anchors use protein chains to link the cell to collagen, the protein that gives structure to our body.

The anchors help the cells stay put and, for the most part, resist disruptions to their environment – but if a cell morphs into a cancer cell, the chain can break, letting the cancer spread to other parts of the body.

Now, for the first time, a team of UNSW Sydney scientists have found the specific protein (or link) in the chain responsible for upholding the connection.

The findings, published today in Nature Materials, build on our understanding of cell mechanics – and could help give new directions for cancer research.

“If these attachments fail, the cell could be more prone to moving and invading tissues, like cancer.”

Scientists already knew that cancer weakens cells’ anchors in some way, but they didn’t know exactly how this happens.

One of the reasons it’s been so hard to study this is the miniscule size of the anchor’s chain: it’s only a few nanometres thick – about 1/10,000th the size of a human hair.

“This is the first time we can actually see in detail what the anchor’s chain looks like,” says Professor Peter Gunning, co-senior author of the study. The team made the findings at UNSW’s Mark Wainwright Electron Microscope Unit, and are the first in the world to use this technique to look at these tropomyosin chains.

Read more: Your body’s cells use and resist force, and they move. It’s mechanobiology

The researchers identified tropomyosin’s role in the anchor’s chain by comparing normal cells with cells from bone cancer patients, along with cancer cells created in the laboratory.

They then tried putting the tropomyosin back into the cancer cells – surprisingly, the anchors managed to attach again.

“Looking into the future, we want to learn if we can leverage this knowledge to reduce the invasion of cancer cells,” says Ms Lastra Cagigas.

“In the short term, we could use this information to find out if a cancer has a predisposition to metastasize, which means to move throughout the body.

“In the long term, we could look into it as a potential target in cancer treatment.”

Prof. Gunning and co-senior author Professor Edna Hardeman, who have been researching this field of science for 40 years, say it’s a milestone in understanding cell mechanics.

“It's been a real pleasure to watch this work develop,” says Prof. Gunning, who was recently presented with the 2020 President’s Medal from the Australian and New Zealand Society for Cell and Developmental Biology (ANZSCDB) for his contribution to research into cell mechanics.

“It reinforces what has essentially been a lifetime's work for us: understanding the principles of the architecture of cells.” 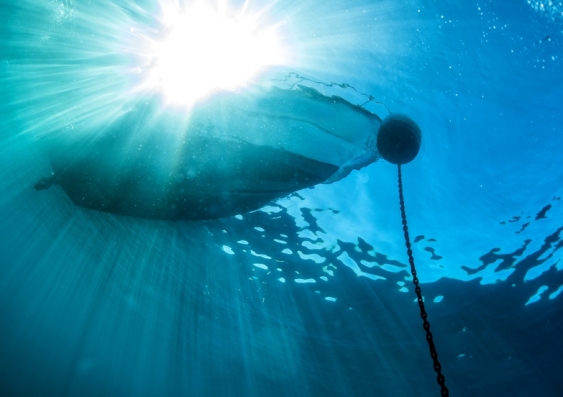 Focal adhesions work like a boat's anchor, helping to keep our cells in the right place. These anchors use protein chains to link the cell to collagen – the protein that gives structure to our body. Photo: Shutterstock

Around 30 per cent of the body is made up of collagen, which forms what’s called ‘the matrix’.

“The matrix is like a scaffold present in our bones, ligaments, muscles, and skin. It’s almost everywhere in the body,” says Ms Lastra Cagigas. “Other than the cells that move through our body, like those in blood, the collagen matrix forms the home for most cells – including cancer cells.”

Pancreatic cancer is one of a few cancers that can modify this matrix for its own benefit by creating a ‘barrier’ around the tumour. This barrier works as a defence mechanism, making it harder for cancer treatments like chemotherapy and immunotherapy to kill the cancer cells.

The tumour forces pancreatic cancer-associated fibroblasts (or PCAFs) – cells around the tumour that are anchored by chains – to build this defence barrier. But now that scientists have identified the proteins in the cell’s anchor and chain, they can explore these proteins as future targets for therapies that could loosen that barrier.

“We’ve identified that the type of protein involved in the chain, tropomyosin, is druggable,” says Prof. Hardeman.

“This means it’s possible to develop small molecule inhibitors, or drugs, that can actually attack these proteins.”

Prof. Hardeman says it’s likely that these potential future drugs would be delivered alongside cancer treatments, so the drugs can temporarily destabilise the barrier while the cancer treatments do their work. 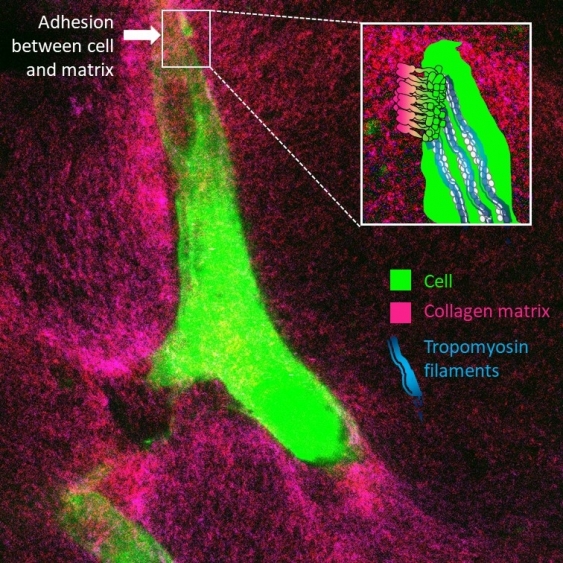 A fibroblast cell (shown here in green) in the process of attaching to the collagen matrix (pink). The tropomyosin filaments (blue) are essential to forging – and keeping – this connection. Image: Maria Lastra Cagigas & Michael Carnell / Katharina Gaus Light Microscopy Facility.

While the findings are encouraging, Prof. Gunning says it doesn’t mean suitable drugs will be available for use in the next few years.

“We have an understanding of the biology, but to go from that to treating a patient is difficult to predict,” he says.

“We can see what the path looks like, but we are less sure of the timeline.”

Read more: What does the future of medicine look like?

It’s more likely that in the near future – potentially the next two or three years – the protein in the chain, tropomyosin, may help scientists predict which cancers are likely to spread more quickly.

“As we build on the underlying mechanisms of cancer and expand our markers of cancer cell biology, our discovery adds a missing link to the development of a personalised diagnosis for cancer,” says Prof. Gunning.

Disclaimer: Prof. Peter Gunning and Prof. Edna Hardeman have established a company that is developing drugs that target the tropomyosins for a number of health conditions. While drug development was not explored in the research paper, future possibilities of this research, including potential drug developments, are mentioned in this press release.