The trial of their lives

Human trials have begun on a groundbreaking anti-cancer drug, developed at UNSW, with the power to shrink tumours and potentially provide an alternative to chemotherapy. 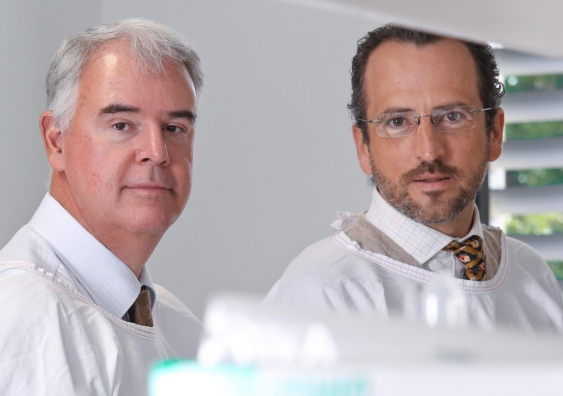 Human trials have begun on a potentially groundbreaking anti-cancer drug with the power to shrink tumours and potentially provide an alternative to chemotherapy.

The compund inhibits how tumours metabolise sugar and works by making inactive a key protein in energy-producing structures in tumour cells known as mitochondria.

PENAO is a second-generation drug developed out of the success of trials in the UK of the first-generation compound.

Human trials of PENAO began in July at the Peter MacCallum Cancer Centre and at Royal Melbourne Hospital and will include patients with solid tumours, such as those of the breast, prostate, colon and brain.

While there are hurdles to overcome, Hogg is hopeful the compounds will form the basis of new cancer therapies.

“The first-generation molecule we made,  at best, would stop tumours from growing, so the hope for that compound was to turn cancer into a manageable disease.

“With this second-generation compound, we’re hoping to be able to take the process a step further and actually shrink the tumours.”

Hogg says the “early signs are good – PENAO is well tolerated like the first-generation drug and is much more effective in pre-clinical testing”.

Read the full story in Uniken.