Researchers have discovered how the modified natural compound dextran-catechin disrupts formation of blood vessels that fuel growth in the childhood cancer neuroblastoma. 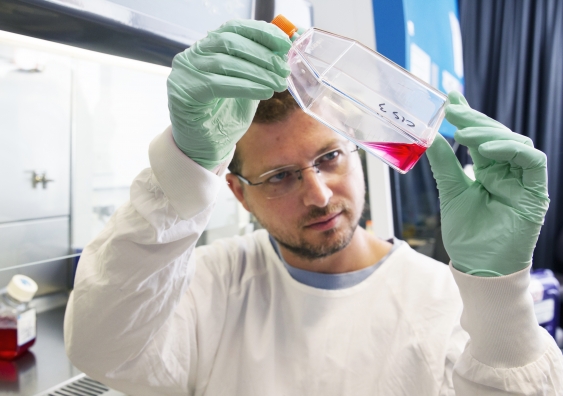 Researchers have discovered how a modified natural compound disrupts angiogenesis, the formation of blood vessel networks, in neuroblastoma tumours, stopping them laying down the vital supply lines that fuel cancer growth and spread.

The international study, led by scientists at Children’s Cancer Institute and UNSW, is published in the journal Scientific Reports and paves the way for less toxic treatments for neuroblastoma, a childhood cancer with an average age of diagnosis of just one to two years old.

Lead author Dr Orazio Vittorio of Children's Cancer Institute found in 2012 that the natural polyphenol catechin slows tumour growth in the laboratory but breaks down too quickly in the body to be effective.

“We joined catechin with a sugar called dextran. We found this dextran-catechin complex is much more stable in the body and that it slows tumour growth by affecting copper levels – but we didn’t know precisely how,” he says.

The new research showed that copper is needed by endothelial cells, the cells that line blood vessels, and that dextran-catechin disrupts the cells’ copper levels in several ways.

“Dextran-catechin inhibits specific copper transport proteins in the cells that line the blood vessels, altering intracellular copper levels. This prevents the cells joining together to form the network of vessels that supplies tumours with blood to keep growing” he says.

“Instead of forming a neat, branching network of blood vessels, you see a mess of cells all over the place, which means cancer cells can’t get the blood supply they need,” says Dr Vittorio.

“This is exciting because it’s a new target for the childhood cancer neuroblastoma that appears safe and has minimal side effects." 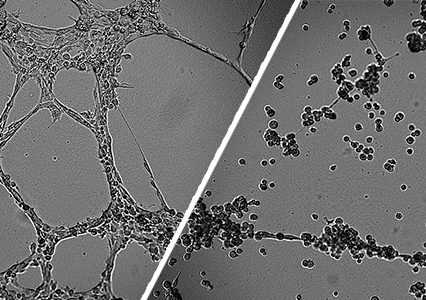 Copper is needed to switch on genes that help endothelial cells grow and form blood vessels during angiogenesis. The study found that dextran-catechin targets specific proteins that control copper uptake and removal in endothelial cells, reducing the copper available to switch on the genes.

Further laboratory research into dextran-catechin’s potential as a future treatment is underway.

Researchers include UNSW Science PhD student and study first author Eugene Yee of the UNSW School of Chemistry, Dr Orazio Vittorio and other researchers from Children’s Cancer Institute and the Australian Centre for NanoMedicine led by UNSW Professor Maria Kavallaris, ARC Centre of Excellence in Bio-Nano Science and Technology, and overseas researchers from universities in France and Italy.

Dr Vittorio presented the findings at the Nanotech France 2017 conference in Paris on 29 June.

Scientists discover method for targeting the ‘Achilles heel’ of neuroblastoma