A team from UNSW Sydney are behind a sculpture and video installation featuring in this year's Sculpture by the Sea exhibition. 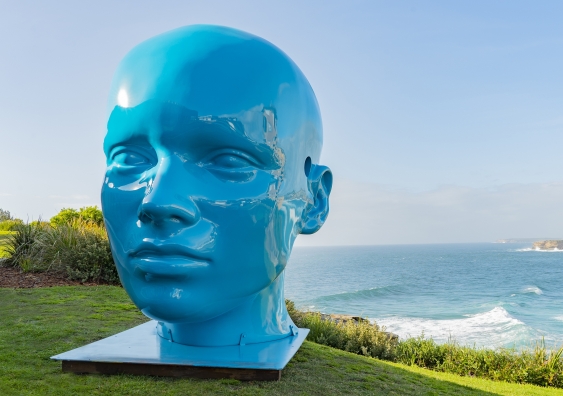 UNSW's Sculpture by the Sea artwork, Look Inside My Mind, is a collaborative work by UNSW’s visual content manager Matthew Gill and his team, with UNSW Medicine, UNSW Psychology and UNSW Canberra.

Sculpture by the Sea, one of the world’s biggest outdoor sculpture exhibitions, will this year feature a work exploring the complexity of mental illness through a video and sculpture created by a team at UNSW Sydney.

It is only the second time a video installation will be part of the exhibition, now in its 22nd year and visited by about half a million people annually. The work will be exhibited with more than 100 other sculptures by artists from around the world on the two-kilometre coastal walk from Bondi to Tamarama.

The interactive installation, Look Inside My Mind, is a collaborative work by UNSW’s visual content manager Matthew Gill and his team, along with UNSW Medicine, UNSW Psychology and UNSW Canberra.

Positioned at the steps on the edge of Tamarama’s Marks Park, Look Inside My Mind is an over-life-sized androgynous, ageless resin head that will give visitors an imagined glimpse into an experience of post-traumatic stress disorder (PTSD) through a looping video seen through multiple viewing stations.

"On closer inspection the viewer realises there are three viewing holes positioned around the head," says Gill. “Within the sculpture is a three-minute audio and visual sequence that depicts the lived experience of PTSD from the view point of a returning solider.

"The images look back at you, creating an emotional engagement that connects you to the person. The viewer can become totally absorbed in the surreal and dreamlike experience and there’s a sense of frustration that you don’t see the full picture or make sense of the order of images."

The video is based on research from UNSW Medicine’s School of Psychiatry, UNSW Psychology, and interviews with male and female ex-service personnel who are UNSW Canberra alumni. One of the contributors whose experiences of living with PTSD informed the video is Benjamin Farinazzo, a former Australian Army Officer and UNSW graduate who was diagnosed with PTSD following his return from East Timor where he served as part of the INTERFET Forces.

Experiences of PTSD, such as intrusive thoughts and flashbacks, heightened physiological reactions such as hyperventilation and anxiety, and dissociative symptoms such as derealization, numbing and detachment, are represented through the video.

Professor Zachary Steel, from UNSW Medicine’s School of Psychiatry, emphasises that raising public awareness of PTSD is crucial in improving understanding about the mental health disorder and removing stigma at a community level.

"PTSD is a major global challenge and capturing an experience of PTSD through video and the eyes of someone who has the disorder is highly valuable in providing a window for others to better understand the debilitating nature of this condition that often can go undiagnosed," says Professor Steel.

"We are all familiar with the term PTSD. What we don’t often understand is how someone can shift from high functioning to sudden impairment.  PTSD can dramatically change a life, disconnecting people from family and friends. While it may resolve for some people who develop the condition, all too often it can become a chronic condition and cause difficulties not only for those directly affected but those who support and care for them," he adds.

Professor Steel, a psychologist and the inaugural St John of God Professorial Chair for Trauma and Mental Health, a partnership between Richmond Hospital, UNSW Medicine and the Black Dog Institute, leads a joint research program in mental health, working closely with veterans and emergency service first responders as well as refugees, asylum seekers and populations affected by displacement.

"PTSD will affect one in 20 Australians at some time during their lives and is one of the most common mental disorders in Australia. There is enormous need for increased awareness," he explains.

Some of the key challenges for clinicians in recent years, says Professor Steel, have been working with veterans and first responders with high trauma load who don’t respond well to treatment, supporting refugees and asylum seekers dealing with the impact of immigration policies and supporting women who have experienced domestic violence.

In the first reports released this year from the joint DVA and Defence-funded Transition and Wellbeing Research Programme – a series of studies examining the health of current and ex-serving Australian Defence Force (ADF) members – researchers found one in two transitioning veterans experienced a mental disorder and one in five were diagnosed with PTSD. The suicide risk was high in transitioning veterans, with one in five reporting suicide and close to one in 10 making a suicide plan in the last 12 months.

"We are seeing extraordinarily high rates of mental trauma – higher than expected. Often those who are most injured are least able to be able to tell their stories," says Professor Steel.

"There are very high fitness requirements for military and emergency first responders, and often the level of impairment caused by relentless trauma exposure isn’t properly recognised as by the time the full extent of post-traumatic stress injuries become apparent they have already left the service.

"There are also major barriers to overcome delays in treatment, he said, and improving early detection and tackling complex government agency systems and processes that can undermine recovery. There is also often limited support for the readjustment back to work.

UNSW Sydney is a significant partner of Sculpture by the Sea, which runs this year from October 18-November 4.

Sculpture by the Sea: King Coal steals the show

Sculpture by the Sea partner

Sculpture by the Sea
UNSW Medicine
UNSW School of Psychiatry