A DNA nanomachine designed to detect viruses such as Ebola has won the Grand Prize for a team that includes three UNSW students in Harvard University’s biomolecular design competition. 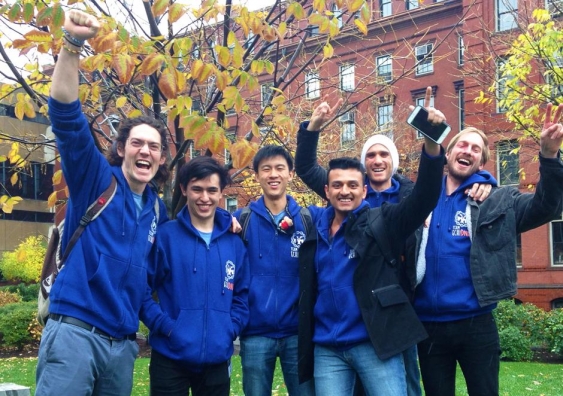 A DNA nanomachine designed to detect viruses such as Ebola has won the Grand Prize for a team that includes three UNSW students in Harvard University’s Biomod Championships – a biomolecular design competition for undergraduates from around the world.

Team EchiDNA – the first Australian team ever to enter the Ivy League university’s annual competition – beat 33 other teams with their ultra-sensitive biosensor which was inspired by the cooperative behaviour evident in the natural world.

The six students, who were supervised by Dr Lawrence Lee of the Victor Chang Cardiac Research Institute, also won the YouTube video prize at the competition.

The team included two UNSW Science students and one UNSW Medicine student -- Advanced Science student Jon Berengut and Honours student Robert Oppenheimer, who are both studying in the School of Biotechnology and Biomolecular Sciences; and Andrew Tuckwell, an Honours student in the School of Medical Sciences who is carrying out his project at the Victor Chang Institute.

The DNA-based nanomachine they developed works like a light switch, turning on and glowing like a beacon when it comes into contact with a specific strand of DNA from a bacterium or virus.

“Our concept is inspired by the way biology works and could provide a quicker and cheaper method of alerting scientists and doctors to the presence of disease,” says Dr Lee.

“Further down the track we would like to have a sensor that is so sophisticated you can test for bacteria or viruses by plugging a blood sample into your mobile phone.”

Mr Berengut says the students were thrilled by their victory.

“Our results demonstrate what can be achieved when you stick a few highly motivated students together in a lab for three intensive months. This experience has been one of the most valuable of my undergraduate career.”

The DNA that is detected by the biosensor could come from a range of sources, including a mutation associated with cancer or a gene that causes antibiotic resistance, as well as from bacteria and viruses.