ABC TV's documentary on labiaplasty shines a light on the increasing number of women choosing to go under the knife to have their labia reduced, writes Rebecca Deans. 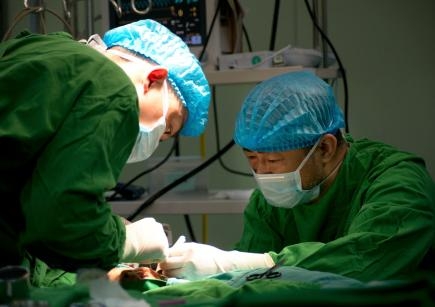 OPINION: ABC TV’s The Vagina Diaries investigates the worrying trend for increasing numbers of labiaplasty procedures being performed in Australia. Labiaplasty is a surgical procedure to remove or reduce the labia minora, the inner lips of the vagina.

Presenter Natalie Harris interviews a number of doctors, patients, and sex industry professionals in the documentary. She even asks random men on the street about what they think about vaginas and the reasons that women might choose to “go under the knife” to have their labia reduced.

The documentary explores the core issues at the heart of labiaplasty – female self-esteem and confidence. The common thread among the women who have labial reduction surgery is the feeling that they’re abnormal and somehow unattractive to their sexual partner.

We don’t know why a woman may feel unappealing to her sexual partner. But the reasons for this distress are complex and part of a psychological spectrum of body image disorders.

And concerns about labial appearance are unsurprising when one looks at advertising sites for labiaplasty on the internet. Given the intention of these sites is to generate a demand for surgery, they don’t tend to celebrate diversity.

Rather, the image of a smooth exterior with the labia minora tucked inside the labia majora is idealised – and negative comparisons are encouraged.

The fact of the matter is that most women (indeed, most people) haven’t actually seen many vulvas up close, and don’t know about the vast anatomical range of normality.

And, interestingly, Australian censorship laws prohibit the publication of illustrations of the labia minora and the clitoris. So vulvas are invariably made to resemble that of prepubescent girls, with pubic hair removed and a single crease placed between the labia major (external lips of the vagina).

This contributes to the general lack of knowledge and understanding about female genital diversity.

The consequences of this are distorted views of genital normality, leading to insecurities in women whose genitals don’t mirror this idealised image.

In the documentary, a sexual health advocate identified as Danni who has had labiaplasty says that if you ask a surgeon whether an operation should be performed, they’re likely to say yes.

She says although she didn’t regret her operation, in hindsight, she wouldn’t have undergone her labiaplasty procedure and considered it largely unnecessary if she’d been more self assured and mature. And particularly if she’d had the benefit of more information on genital diversity.

But a labiaplasty procedure may precede more then just regret.

Women can experience complications such as bleeding, infection and scarring. And the long-term complications of labial reduction surgery are unknown.

What we do know is that women experience sensation from labia minora that contributes to sexual function. In fact, after the clitoris, the labia minora are regarded the most sensitive part of the female genitalia, helping stimulation and lubrication during sex.

Cutting and burning this delicate tissue causes scar tissue, and interferes with the blood and nerve supply making the labia less sensitive to touch. This may have a negative impact on sexual sensation.

So why would a woman want labiaplasty? Women rate confidence as the big driver for undergoing surgery.

One interviewee, identified as Louise in the documentary, says, despite the pain and illness she suffered as a result of surgery, she felt more confident after her procedure.

But the presenter points out that the surgery seemed to fulfil a space in her mind rather than body; that it seemed to have less of a physical impact than a psychological one.

Medicare’s schedule of pharmaceutical benefits items reports the number of labioplasty procedures has doubled in the last ten years in Australia. And a similar trend is occurring throughout the developed world.

A recently released “ethical opinion paper” by the UK’s Royal College of Obstetricians and Gynaecologists says women should be given accurate information about normal variations in female genitalia. And that those requesting labiaplasty should be offered counselling and psychological treatments for problems such as body image distress.

Knowledge is power, and a recent backlash against genital insecurities has prompted the launch of “labia library” by Women’s Health Victoria. The website contains information, advice and a photo gallery of 20 normal labia.

Sites such as these may help prevent the harm caused by unnecessary, and often expensive, surgery.

UNSW Conjoint Associate Professor Rebecca Deans is a paediatric and adolescent gynaecologist at the Royal Hospital for Women and Sydney Children's Hospital.

What to make of female cosmetic genital surgery?