An epidemic of new cases of non-Hodgkin lymphoma in Australia has led UNSW researchers to embark on a world-first study to uncover the causes. 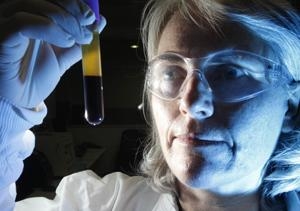 An epidemic of new cases of non-Hodgkin lymphoma in Australia has led researchers to embark on a world-first study to uncover the causes.

“In the last 25 years, we have seen a 40 percent increase in the incidence of non-Hodgkin lymphoma in both men and women, with the most dramatic increases occurring in the 1980s and early 1990s,” said study leader Associate Professor Claire Vajdic, from the University of New South Wales Prince of Wales Clinical School.

Non-Hodgkin lymphoma is a type of blood cancer that includes a diverse grouping of around 40 different subtypes affecting cells of the immune system called lymphocytes. Together with Hodgkin lymphoma, it ranks in the top 10 most common cancers in Australia.

The LEAF study, which aims to recruit 2,400 Australians, is the first internationally to examine both the genetic and environmental risk factors for one of the most common forms of the disease, follicular lymphoma. It will also look at factors that influence survival after diagnosis.

“Rates of follicular lymphoma are continuing to increase in Australia and internationally, while rates of some other non-Hodgkin lymphomas have plateaued. But because we don’t know what causes follicular lymphoma, we can’t implement any targeted prevention programs,” Associate Professor Vajdic said.

The five-year study spans NSW and Victoria and will recruit people diagnosed with follicular lymphoma and either their sibling or partner.

“We are taking a unique approach and studying patients and a member of their family. We will be asking questions about their lifestyle and we’ll look at their DNA as well. That way we will get a good picture of both environmental and genetic risks.”

The blood and genetic material collected will also form a repository of lymphoma biospecimens for future research.

While the reasons behind the epidemic are not fully understood, the researchers believe the dramatic jump points to environmental or behavioural risk factors.

“The strongest and most consistent evidence is with occupational exposure like pesticides and solvents, and that has not been studied particularly well in the past, because usually all non-Hodgkin lymphoma subtypes have been assessed together. So that’s why we are focusing on follicular lymphoma alone and asking questions about people’s occupational exposures, as well as measuring chemical levels in their blood,” Associate Professor Vajdic said.

The study is being led by a multidisciplinary alliance of epidemiologists, clinicians, geneticists and pathologists. Participants will complete questionnaires about their lifestyle and occupations, give a saliva sample for a DNA profile, and some participants will give a blood sample.

Anyone in NSW and Victoria aged between 20 and 74 who has been diagnosed with follicular lymphoma since January 2011 is urged to contact the study team through details on the website www.leaf.unsw.edu.au

Read more about the LEAF study in the latest issue of Uniken.