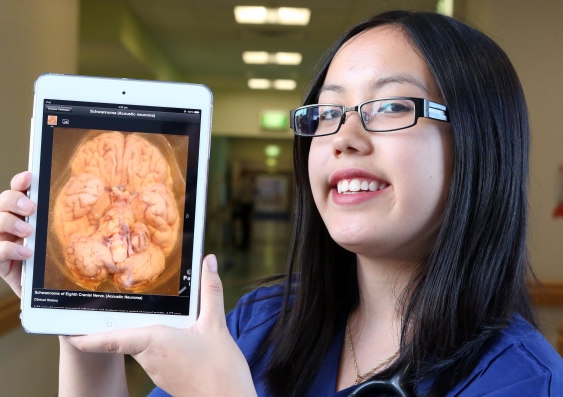 A few decades ago, medical students used to spend an inordinate amount of time inside UNSW’s Museum of Human Disease. Studying its formalin-preserved specimens was the primary way to learn how to identify the appearances of disease.

Now, thanks to a unique app developed by UNSW’s Department of Pathology and the Museum, students can study the same signs of disease while doing rounds on a hospital ward, while sitting on a train or, should they so choose, from the comfort of their own beds.

Images of Disease is an interactive educational app that catalogues the forms and structures of more than 1000 diseases, ranging from heart attack to hydatid cysts; diphtheria to asthma. The images, which include the microscopic as well as the gross, can be cross-referenced, enlarged, measured and explored in depth. The app is aimed at medical students, specialist trainees in radiology and pathology, and medical practitioners.

“In the old days, when I was a medical student, we used to spend hours and days in the Pathology museum. Some people even slept in there because there was just so much to learn,” says Associate Professor Gary Velan, head of UNSW’s Department of Pathology. “Now people can access these things in their own time, in their own space and learn as they go.

“When students are in a clinical environment, they can look up a particular disease, see what it looks like, its typical clinical features, what it looks like microscopically and perhaps also view a range of other diagnostic imaging investigations [such as an MRI scan or X-ray] that would typically accompany that sort of condition,” says Associate Professor Velan, an award-winning teacher.

Fifth-year medical student Jacqueline Ho has been using the app this year. “It’s great to be able to study anywhere,” she says. “I haven’t used [the app] right there in front of a patient, but I’ve used it just afterwards, to check the pathology behind what’s happening.”

Images of Disease is only available for IOS-based devices, for now.

“We are hoping that through app sales we will be able to fund the development of the app for android and Windows devices so all students will be able to access it,” says Associate Professor Velan. The app is free for UNSW medical students or costs $17.99 through iTunes. There is also a free “Lite” version which includes a smaller selection of images.

Learn to survive a zombie apocalypse this summer