PNG's first representative survey of people most at risk for HIV has revealed that one in six sex workers in Port Moresby are HIV positive. 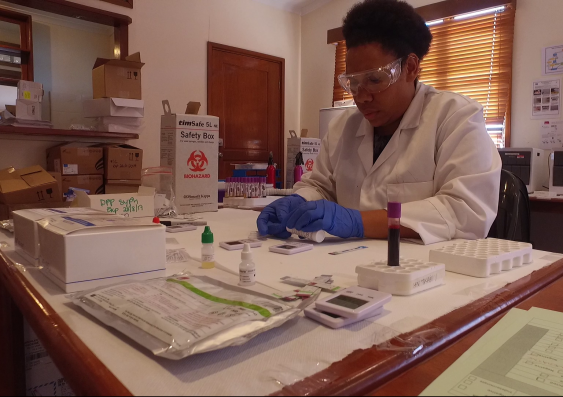 A team member working on the samples. Photo: Kirby Institute

Australian researchers from the Kirby Institute have collaborated with researchers at Papua New Guinea’s Institute of Medical Research and the US Centers for Disease Control and Prevention to provide the country’s first representative survey of people most at risk for HIV in Port Moresby.

The survey results were released on Thursday in Port Moresby by PNG’s Minister for Health and HIV, Hon Sir Puka Temu.

Clinical and behavioural information was collected from the populations considered most at risk for HIV and STIs in Port Moresby: female sex workers, and men who have sex with men and transgender.

HIV and STI rates in Papua New Guinea are among the highest in the world but until now population-level estimates for these groups were unknown.

The clinical component of the study involved testing each participant for sexually transmissible infections and blood-borne viruses at the point-of-care. “Point-of-care means the collection and the testing is done in the clinic and the results are given to study participants within hours, eliminating the need to send specimens to a lab and return for results,” says Dr Angela Kelly-Hanku from the Kirby Institute, principal investigator on the study.

“If a participant returned a positive test for one of several STIs included in the study they were able to begin treatment immediately.”

This is the first time a study of this kind has been able to test for so many STIs at point-of-care, and represents an important breakthrough in HIV and STI monitoring, testing and treatment in low-resource settings.

Support for practical research that involves affected populations means that programs for prevention and treatment have a good chance of achieving their goals of reducing the high levels of HIV and other STIs.

“The findings from this study provide an improved roadmap for treatment, care and provision of other services to key populations affected by HIV and STIs in Port Moresby, where this study was undertaken.

“The Australian Government has been a key funding partner for PNG’s HIV response. Support for practical research that involves affected populations means that programs for prevention and treatment have a good chance of achieving their goals of reducing the high levels of HIV and other STIs.”

The results of this survey also give voice to the needs of highly marginalised groups in PNG society, who were central partners in the design and conduct of the study.

“Collecting this kind of information is essential to inform Papua New Guinea’s national strategy and provides vital information about where best to dedicate limited resources,” says Dr Angela Kelly-Hanku, who holds a joint appointment with the Kirby Institute at UNSW Sydney and the PNG Institute of Medical Research, and was recently awarded a prestigious UNSW Scientia Fellowship for her work in this area.

“The Kirby Institute and the PNG Institute of Medical Research have a long term and highly productive partnership that has enabled us to carry out complex and sensitive research projects among vulnerable populations in PNG. If we tried to do any of the work on our own, these challenges would be insurmountable,” says Dr Kelly-Hanku.

HIV ‘wakes up’ only once a week under treatment