Opinion The world is hungry for mRNA COVID vaccines like Pfizer's. But we're short of vital components

Skyrocketing demand coupled with shortages of vital components is leading to bottlenecks in the supply chain of Pfizer's and other mRNA vaccines. 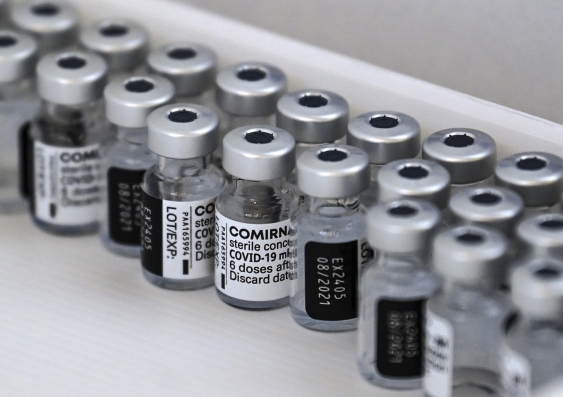 Manufacturing of mRNA vaccines is a process with multiple steps and requires smooth delivery of components. Photo: Georgi Licovski/EPA/AAP

Given the AstraZeneca COVID-19 vaccine is no longer recommended for under-50s following news of very rare blood clots, Australia is looking to other vaccines to plug the gap.

Pfizer’s mRNA vaccine will become the mainstay of the rollout, with 40 million doses expected to arrive before year’s end.

But Australia isn’t the only country eager to get its hand on this vaccine.

Skyrocketing demand coupled with shortages of vital components is leading to bottlenecks in the supply chain of this and other mRNA vaccines, delaying vaccine supplies.

So what are the missing supplies for making mRNA vaccines?

Read more: What is mRNA? The messenger molecule that's been in every living cell for billions of years is the key ingredient in some COVID-19 vaccines

Manufacturing mRNA vaccines is kind of like making a car, with an assembly line and many steps. Each step needs to lead to the next and flow smoothly to make the final product.

COVID mRNA vaccine manufacturing starts with making the “messenger RNA”, the instructions that tell our cells to make the coronavirus’ spike proteins. The mRNA is produced in reactor vessels, where protein enzymes track along a DNA template and copy that DNA sequence into RNA form.

The first shortage is in sterile, single-use plastic bags which sit inside the metal reactor vessels used for making the mRNA, almost like a bin liner. Several suppliers of these plastic liners are ramping up production so it’s anticipated this shortage won’t last too long.

The second main shortage relates to “capping” the mRNA at one end. Capping involves adding a chemical molecule to the mRNA which stops the mRNA breaking down too quickly and helps our cells use the mRNA to make protein. Early on during the worldwide upscaling of mRNA manufacturing, rumours abounded that the enzymes and raw materials to make the mRNA cap were running short, given related enzymes used for COVID tests were also in short supply.

However, while only a few players dominate the field, this doesn’t seem to be a bottleneck now. But it does still remain one of the most costly parts of the mRNA production process.

The main bottleneck right now is the supply of some of the lipids making the nanoparticles that protect the mRNA and deliver it into our cells.

One lipid in particular, a so-called “cationic lipid”, wraps around the mRNA and then releases it inside the cell. Several chemical synthesis steps are required to make these cationic lipids, and prior to COVID only a handful of manufacturers worldwide were making these, and only on a fairly small scale.

Upscaling this production of cationic lipids has been even harder than setting up the mRNA production. Currently, four companies — Croda/Avanti, CordenPharma, Evonik and Merck — are the main manufacturers of these lipids.

As an indication of how serious this shortfall in lipids is, in December 2020 former US President Donald Trump invoked the Defense Production Act to assist Pfizer in accessing more lipids.

Why do we have these shortages?

The reasons for these shortages are complex. In most cases, demand has outstripped supply. In some cases, some countries or companies have been stockpiling some of these components. “Operation Warp Speed”, initiated by the Trump administration to speed up COVID vaccine development, used its financial clout throughout 2020 to buy up and secure many vaccine components including vials and lipids. This has put the vaccine manufacturers based in the United States in a good position, including Moderna and several Pfizer sites.

For some materials, the reason for the shortfall is simply that they’re hard to make. The bespoke cationic lipids are chemically synthesised in ten steps that all have to performed under strict quality control. Even if the equipment is ready, setting up such a manufacturing process takes months.

How could these shortages impact future mRNA manufacturing in Australia?

When Victoria’s new mRNA manufacturing facility comes online, hopefully in the next 12-24 months, some of these global shortages may still be plaguing the worldwide supply chains. This shouldn’t stop our efforts on that front as raw material supplies are rapidly increasing.

Australia nearly ran out of some essential drugs, like ventolin, in the early days of the COVID-19 crisis. This was due to both Australians’ panic buying, as well as COVID-hit Chinese factories slowing down their manufacturing, leading to a lack of access to these ingredients for our most commonly used drugs. The added benefits of locally based manufacturing of active pharmaceutical ingredients is we’d be part of the solution when components are in short supply in future.

Australia also has a very strong research community in mRNA and nanomedicine. There are several world-leading groups working on creating better lipid nanoparticles for the delivery of mRNA and other medical products.

Having access to local manufacturing capability of active pharmaceutical ingredients would therefore transform the ability of Australian researchers to lead the way in developing the next blockbuster medical technology based on mRNA or nanoparticle delivery.