Opinion Aboriginal voices are the key to real change

To avoid defeat of a referendum to recognise Aboriginal peoples in the constitution, Tony Abbott needs to champion a community-led path to the ballot box, writes George Williams. 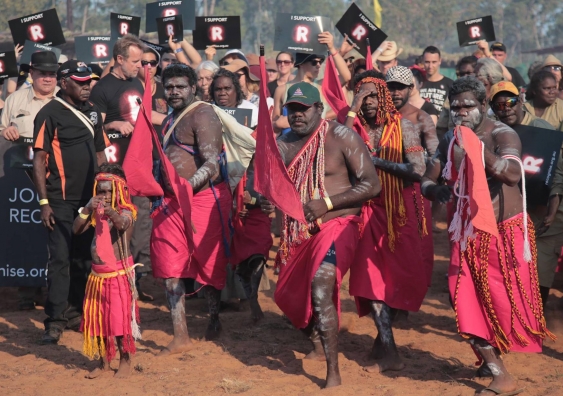 OPINION: Tony Abbott wants to be Australia's first ''Prime Minister for Aboriginal affairs''. He has allocated his own department responsibility for Aboriginal policy and service delivery. He also said that he wanted his first day in the job to include ''serious discussions on indigenous issues and, in particular, on ways to advance the recognition referendum''.

After the fits and starts of Labor's time in office, all this points to a referendum this term of Parliament to recognise Aboriginal peoples in the constitution. This would reflect the Coalition's long record of achievement and advocacy in this area.

In 1967, it was the Coalition that put the referendum that deleted discriminatory references to Aboriginal people from the constitution. This included removing the ban on counting indigenous people for electoral purposes. The referendum attracted a ''yes'' vote of more than 90 per cent, making it Australia's most successful ever.

Prime Minister John Howard returned to the issue in 1999. In addition to a vote on a republic, he asked Australians to endorse a new preamble to the constitution. It would have ''honour[ed] Aborigines and Torres Strait Islanders, the nation's first people, for their deep kinship with their lands and for their ancient and continuing cultures which enrich the life of our country''.

Howard's preamble failed at the ballot box, largely because he drafted it without consulting broadly with the Aboriginal community. The defeat did not, however, end his support for the idea. In the lead up to his 2007 election loss, Howard proposed another referendum. He wanted to recognise indigenous Australians ''as the first inhabitants of our country, their unique heritage of culture and languages, and their special (though not separate) place within a reconciled, indivisible nation''.

Abbott has picked up where Howard left off. He has pledged to ''complete'' the constitution through recognition of Aboriginal peoples. However, he has not said what form this will take, only that within 12 months he will release a draft amendment.

Abbott will need a well-thought-out strategy if he is to avoid repeating Howard's defeat of 1999. Only eight out of 44 referendums have passed, and none since 1977. Many prime ministers have been left smarting. Robert Menzies lamented that winning a referendum ''is one of the labours of Hercules''.

Prime ministers find referendums difficult because they require a different style of leadership. They cannot win the debate by marshalling the numbers in Parliament. Instead, the people get a veto, which they have been more than willing to exercise.

Many referendums fail because people vote ''no'' to what they see as a ''politicians' proposal'', such as the so-called ''politicians republic'' in 1999. They also reject any proposal that they do not understand, following the simple line of ''don't know, vote No''.

To avoid defeat, Abbott will need to do more than merely announce his preferred change to the constitution and invite feedback. He needs to champion a community-led path to the ballot box. Many community, business and other bodies are already engaged in this way. Leading the pack is Recognise, an offshoot of Reconciliation Australia , which is building the people's movement for change.

Abbott should start by listening to the community, and to Aboriginal people in particular, to find out how they want the constitution altered. This will develop popular ownership and awareness of the idea. The community also needs to see the issues debated. This might involve a constitutional convention, which has been a hallmark of past referendum successes.

The challenge for Abbott is that the community may take him out of his comfort zone. Abbott has yet to make his position clear, but he may only want symbolic change to the constitution in the form of words of recognition for Aboriginal peoples, their culture and history.

By contrast, the cross-party expert panel formed during the last Parliament found a strong desire among people for symbolic and practical change. Australians believe now is the time to remove clauses from the constitution dating from the era of the white Australia policy. One that needs to be deleted is section 25, which recognises that states can disqualify ''all persons of any race'' from voting.

The expert panel also found strong concern with section 51 (26), which was drafted to enable the federal Parliament to discriminate against ''people of any race''. According to prime minister Sir Edmund Barton, this was included in 1901 so Parliament can ''regulate the affairs of the people of coloured or inferior races''.

This needs to be replaced by a new power to make beneficial laws for Aboriginal people. More broadly, the expert panel found overwhelming support for a new clause to prohibit discrimination on the basis of race.

Aboriginal leaders have made it clear they will oppose a referendum that fails to deal with the practical problems of our constitution. They will do so because even well-meaning symbolism will ring hollow if it sits alongside clauses that permit Aboriginal people to be denied the vote and discriminated against because of their race.

This opinion piece was first publishd in The Sydney Morning Herald.

Professor George Williams explains why recognition of Indigenous Australians in the Constitution is so important.