Opinion The burqas are better at Parliament House

Instead of banning burqas and niqabs from Parliament, politicians should embrace the garments, which would allow them to sleep and eat their ear wax undetected, writes Geoffrey Brahm Levey. 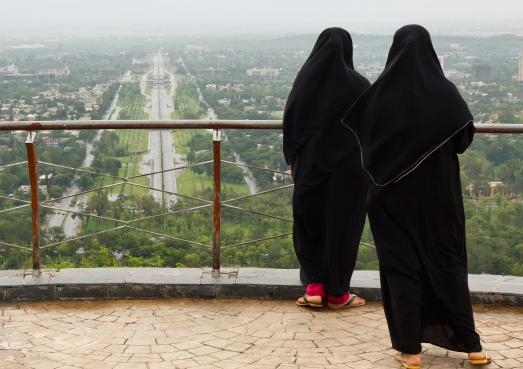 OPINION: Commentary on the campaign by a few Coalition politicians to ban or restrict the burqa (or niqab) has completely overlooked the garment's advantages.

If every man, woman and child in Australia were to wear it, we could eradicate our infamously high incidence of skin cancer within a generation. The image of the bronze Aussie might perish, but Australians would live to a riper and less wrinkled old age.

Women would be freed from the daily chore and exorbitant expense of make-up rituals. They could plough their newfound savings into superannuation. Among men, the clean-shaven could miss a day or two with the razor without risking their professional careers. Those with beards need not worry so much about maintenance. For the young and the restless, every encounter could be a blind date, adding mystery to budding relationships.

Politicians, especially, would revel in the advantages. Behind the veil, Senator George Brandis could have privately regained his composure instead of stammering and being flummoxed in trying to explain metadata. Prime Minister Tony Abbott would be spared all those excruciating forced smiles in photo ops. Cauliflower ears? Instantly tamed! Christopher Pyne could finally relax his grin muscles.

Parliament House is where the burqa would really be a treat. Clive Palmer could sleep in the chamber undetected for hours. Former PM Kevin Rudd could have munched on his earwax even at the dispatch box. Speaker Bronwyn Bishop might be unchained of all those heavy pearls, while Joe Hockey needn't worry about bulging pinstripes. And mercifully gone would be ties, whether blue, pink or canary yellow.

Truly, the burqas are better at Parliament House.

Isn't it a security risk? Senator Jacqui Lambie is right to wonder about 'packages' under garments. Bikinis and budgie smugglers would be the safest parliamentary attire. Except, that is, for already sore eyes in the profession called "showbiz for ugly people".

No, there is only one reason for entertaining the burqa and niqab in our public places. Our much-heralded liberal democratic values mandate it. There is no warrant for assuming these garments represent oppression, at least any more so than red power suits and high heels.

The burqa is worrying some politicians not because it is oppressive to women or a security risk. The objection is rather that it is a "visible statement of separation and of difference", as the British foreign secretary Jack Straw once put it. Straw explained that it was essential to have "face-to-face" conversations with his constituents, where one could "see what the other person means, and not just hear what they say".

This was likely news to his then colleague, British home secretary David Blunkett, blind since birth. Indeed, we Westerners think nothing of conducting daily conversation in dark sunglasses, where the shades are drawn on the windows to the soul. In this respect, the niqab - which leaves the eyes visible - is in fact more revealing than sunnies.

Tony Abbott says he finds the clothing "confronting". Undoubtedly, many people have similar responses to the head coverings some Muslim women wear. Perceptions, however, are in the eye of the beholder. Another way of dealing with confronting clothing is to get used to it.

On the promenade at Coogee Beach there is a plaque recalling the controversy in the early 20th century as some bathers began to reject full-length bathing suits in favour of more comfortable and revealing costumes. Budgie smugglers then were not only unacceptable, they were still unthinkable.

That might suggest just how far "we" have come and how old hat are others. But fashion is notoriously fickle. Some things go, some things return, and some things never change. Our judiciary still don wigs while our universities, those bastions of enlightenment, graduate new generations in medieval mortar boards.

A liberal society means being free to "put it on" as well as to "take it off". A blanket ban on the burqa and niqab is an attack on core Australian values - freedom, equality, and inclusion.

In the face of this attack, we are all burqa-wearers now.

Geoffrey Brahm Levey is an Australian Research Council Future Fellow and political theorist at the University of New South Wales.

Defending multiculturalism is in all our interests