It is not only bad policy but also unfair for the Government to send asylum seekers to a poor country like Cambodia when it is Australia that should be honouring its responsibilities, writes Joyce Chia. 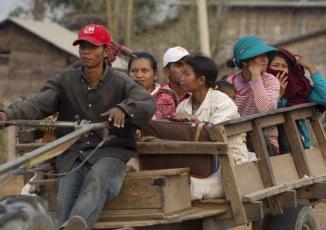 OPINION: Cambodia, a poor, politically fragile country with a horrific past, was until recently a nation that produced refugees, not took them. In 1992, it was the arrival of desperate Cambodians in boats that resulted in the Australian government introducing mandatory detention.

It is true that Cambodia, unlike most other Asian countries, is a party to the Refugee Convention and most other human rights treaties, and its constitution also recognises and respects international human rights. For this it should be commended.

That does not mean, however, that the rights set out in those instruments are fulfilled in practice. If there is evidence that rights cannot be respected in Cambodia, then there are real questions about whether Australia's transfer of refugees to that country accords with our own international legal obligations.

For a start, Cambodia's refugee legislation is not consistent with its or Australia's obligations under international human rights treaties. For example, Cambodian law doesn't protect asylum seekers from being returned to countries where they may be arbitrarily killed, tortured or otherwise suffer cruel, inhuman or degrading treatment.

There is also a gap between what Cambodian legislation says and what actually happens in practice. Despite a very small number of applications for refugee status - only 48 applications at the beginning of 2012 - decisions can take up to two years, and appeals a further 11 months. Recognised refugees struggle to get residence and travel cards, obtain employment, and gain citizenship, which makes day-to-day life very difficult.

There have also been times when Cambodia has returned asylum seekers to countries where they are at risk of persecution.

In 2009, for example, Cambodia deported 20 Uighur asylum seekers to China, a day before the Chinese vice-president arrived to sign contracts worth more than $US1 billion.

Afterwards, there were reports that four of those deported had been condemned to death and others sentenced to life imprisonment.

The country is also far from achieving the rule of law. In 2013, the UN Special Rapporteur for Human Rights in Cambodia reported that the courts were corrupt and used the criminal law to punish human rights defenders and political dissidents. There are also extremely few lawyers, particularly legal aid lawyers.

This January, NGOs documented a host of human rights challenges to the UN. These included: a pattern of politically motivated killings; instances of torture in "rehabilitation centres"; harassment of human rights defenders and journalists; the disappearance of free media; forced evictions from land without compensation; violence against lesbian, gay, bisexual and transgender persons; high rates of domestic violence; and discrimination against minorities.

In general, the picture of human rights in Cambodia is grim. The real problem, though, is not Cambodia.

It is unfair to blame a developing country with a genocidal past for its failures when it is Australia - a rich, stable democracy - that is refusing to honour its responsibilities to refugees.

Cambodia is much poorer than Nauru (in 2011, its GDP per capita was about a seventh of Nauru's). Like Nauru and PNG, it relies heavily on Australian foreign aid, receiving more than $85 million in 2013-2014.

Attempts by rich countries to deflect refugees to poor countries is especially unjust given that developing countries already take on much more than their fair share of the responsibility for protecting the world's refugees - hosting more than 80 per cent of the global total.

Resettling refugees in Cambodia is not only unjust, it is also bad policy.

Australia, as a country of immigration, already has developed networks and services for assisting and integrating refugees. It would be easier, cheaper and more humane to resettle refugees in Australia than in Cambodia.

It is not known yet how much a deal with Cambodia will cost, but an extra $420 million in aid was allocated to PNG for Manus Island (aside from the more than $1 billion given for the detention centre itself). That centrehosted 1296 refugees at the end of March.

Australia pours in three-quarters of its total aid budget in the Asia-Pacific region, and more than $880 million in 2012-13 on improving governance, including justice and human rights. As the Australian Department of Foreign Affairs rightly states, "fostering the promotion and protection of human rights underpins good governance and leads to sustainable and equitable growth."

We give this money because, in the end, it is in our long-term interest for our neighbours to respect the rule of law and human rights. We cannot expect them to do so if we do not do so ourselves.

FactCheck Q&A: how much was spent on the Cambodia refugee deal and how many were settled?