Opinion Could a secret ballot give us an unbiased Speaker?

A secret ballot to elect parliamentary Speakers would allow MPs to choose the best person for the job and reduce party-political bias, writes Fergal Davis. 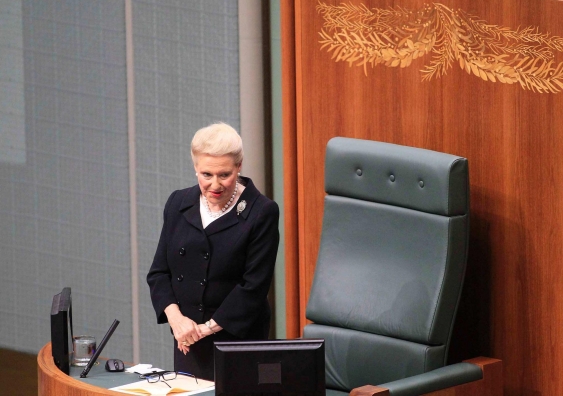 OPINION: In parliamentary tradition a newly elected Speaker of the House has to be dragged reluctantly to the Chair. That tradition has its roots in the historical function of the Speaker in communicating the will of parliament to the monarch – a role which risked exciting the anger of the King. Today, any apparent reluctance is more likely to be a genuine. When you think about it: who would actually want to be Speaker?

Any prestige associated with the role is largely ceremonial. The Speaker does not participate in debates. Section 40 of the Commonwealth Constitutionmakes it clear that they do not vote in parliament – unless a vote is tied. When a vote is tied, the Speaker has the casting vote but they are generally expected to vote with the government.

The primary duty of Speaker is to preside over the House and maintain order in the House. They are tasked with upholding the standing orders (which are usually adopted by the House at the beginning of each parliamentary session). Finally, the Speaker protects the rights of backbench MPs. The role is crucial but stifling.

The functions demand an individual MP who is independent and unbiased. The other members of parliament must trust that the Speaker will exercise their discretion and rule fairly. The problem is that to succeed in politics, to get elected, politicians need to be partisan. In short, the crucible of politics does not lend itself to the unearthing of unbiased, broadly respected, non-partisan MPs capable of chairing debates to the satisfaction of all.

This week, Ken Smith quit as Speaker of the Victorian Legislative Assembly. His overthrow was the culmination of a long running campaign by former Liberal MP Geoff Shaw. In Canberra, controversy has surrounded the replacement of Harry Jenkins with Peter Slipper as Speaker of the House of representatives. Even greater controversy surrounded the subsequent removal of Peter Slipper. And more accusations of bias have been thrown at the Speaker, Bronwyn Bishop.

These controversies and allegations must be uncomfortable for the individuals involved, but the issue is even more fundamental than that. The Victorian Legislative Assembly was suspended for days in December and saw democratically elected members suspended from the House. Despite the removal of Smith, the Napthine government remains unable to proceed with its legislative agenda. When the office of Speaker becomes dysfunctional, parliament ceases to function.

How can we reform the office to Speaker to reduce its exposure to controversy?

One obvious solution would be to have a non-politician chair parliamentary debates. A bureaucrat would not be less susceptible to the claims of bias and might be able to adopt a more technocratic style. That proposal is unlikely to succeed. It would be problematic for an appointed official to sanction (and even exclude) an elected representative from a parliamentary debate.

An alternative proposal was recently floated by the Irish Constitutional Convention. That consultative body comprises of politicians and randomly selected members of the public. It is examining a wide range of issues in the Irish Constitution – from same sex marriage to the role of the Ceann Comhairle (Speaker of the Dáil, the Irish parliament).

The Convention approved a recommendation that the Ceann Comhairle be elected by secret ballot. In theory a secret ballot would reduce the ability of the party whips to influence the selection of the Speaker – allowing MPs to select the person they think best suited to the job. Such a proposal might have made it more difficult for prime minister Gillard to replace Jenkins with Slipper.

As well as electing the Speaker by secret ballot further steps could be taken to secure the independence of the office. To avoid the perception that a Speaker is being politically influenced by their desire to stand in the next election, the rules could be altered so that the Speaker is elected to a fixed, non-renewable term of office. That would give them security of tenure and could insulate them from political interference. At the Commonwealth level, any such proposal would require a referendum to amend Section 35 of the Constitution.

Reforming the office of Speaker is as much about protecting the Speakers themselves from accusations of bias as it is about countering actual bias. In the era of hung parliament and extreme partisan politics, the perception of independence is all important if our parliaments are to function effectively.

It is 160 years since those at the Eureka Stockade demanded the right to a secret ballot. It may be time to extend that right to MPs – for this narrow purpose at least.

When politics and the law intersect