Tony Abbott has promised a new way forward for federal-state relations if the Coalition wins government. But will he find the federal lever of power too tempting not to pull, ask Andrew Lynch and Shipra Chordia. 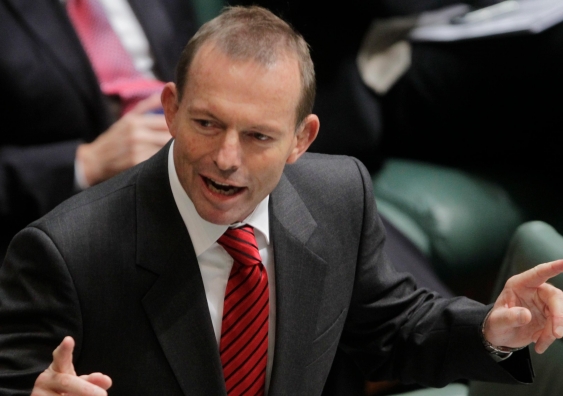 OPINION: Opposition leader Tony Abbott announced on the weekend that a government he leads would adopt a new approach to relations between the Commonwealth and the states. He has promised to meet with the state premiers just weeks after a Coalition victory. Abbott said:

…the way forward is to try to ensure that we clarify responsibilities so that each level of government, as far as possible, is sovereign in its own sphere.

But there are two good reasons for voters to be sceptical as to whether Abbott really will deliver in this regard. First, this recent commitment to genuine power-sharing with the states directly contradicts the position Abbott advocated in his 2009 book,Battlelines. Back then, he said:

…the only way to sort out responsibilities in areas where the two levels of government are both involved is to put one level of government in overall charge.

By “one level of government”, Abbott was explicit that he meant the Commonwealth.

The specific change Abbott proposed making to the Constitution “wouldn’t abolish the states”, but it would enable Commonwealth to override the states “in areas where the national government was determined to intervene”. Under his vision, the role of the states was to be akin to that of the territories. Unlike his recent comments, there was no room back then for recognising the sovereign power of the states.

Also, opposition parties often hold themselves out as the solution to Australia’s “dysfunctional” federalism and then disappoint when they win power. Undertakings to fix the system are easy to make – for one thing, they do not invite followup questions about costings. What’s more, they are always popular with the electorate.

In the 2012 Constitutional Values survey conducted by Griffith University, 89% of respondents reported dissatisfaction with the current federal system and 92% agreed that intergovernmental collaboration was a desirable feature of government. Overall, 67% of respondents thought that Australia’s federal system should be reformed.

In 2007, prime minister Kevin Rudd at first channelled this popular sentiment to good effect. But once he was in office, the overcrowded agenda and micromanagement that marked his prime ministership derailed these good intentions. He described the Council of Australian Governments (COAG) as the “workhorse of the nation”, but left the states disempowered and exhausted.

The ousting of Labor from power in the states also meant COAG needed more careful handling than Rudd seemed able to give it. The Commonwealth went on to pursueunilateral health and hospital reforms and neglected to consult the states on the proposed mining super-profits tax.

Under former prime minister Julia Gillard, Labor failed to broker an agreement with the states at COAG over the Gonksi school funding earlier this year. Instead, the Commonwealth has fallen back on a series of difficult bilateral negotiations. Reaching different outcomes for different states in what was touted as a national “education revolution” is hardly federalism working at its optimum.

So, Abbott probably could do little worse in managing Commonwealth relations with the states than the existing government has managed. At the same time, it is unlikely that he will achieve meaningful federal reform along the lines he indicated.

Once elected to power, it appears that no federal party can help itself – the levers of Commonwealth control, particularly its financial clout, are simply too tempting to resist. This is particularly so when the colour of state governments swings across the political divide and the national government finds little sympathy for its policy aims. The experience of both the Labor government – and also the Coalition government under John Howard that preceded it – amply demonstrate this.

Given the forthright way in which Abbott staked his position on Australian federalism just a few years ago, it is hard to believe that he would be able to exercise greater restraint in his dealings with the states than either Rudd or Howard.

Indeed, based on past experience, we should be sceptical about any new deal for the states coming to pass – no matter who wins government on September 7.