The International Criminal Court has turned from a court on paper into a leading actor in the enforcement of international justice, said ICC President Judge Sang-Hyun Song, delivering the 2012 Wallace Wurth memorial lecture. 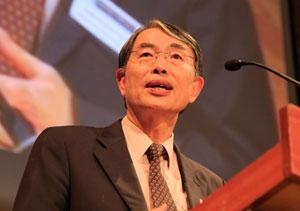 In the last 10 years, the International Criminal Court has turned from a court on paper into a leading actor in the enforcement of international justice, says ICC President Judge Sang-Hyun Song, who delivered UNSW’s flagship Wallace Wurth memorial lecture.

"120 States Parties and the Security Council’s unanimous referral of the Libya situation are some of the strongest indicators of the growing international confidence in the ICC’s role. 120 States, which is more than 60 percent of the world’s sovereign nations, have ratified the Rome Statute, and the number keeps growing. Last year six new countries joined the ICC, more than in any single year since 2003.

The ICC is currently dealing with international crimes allegedly committed in seven countries – the Democratic Republic of the Congo, Uganda, the Central African Republic, Sudan, Kenya, Libya and the Ivory Coast. The Prosecutor is following developments in many more situations across the world. The ICC’s first judgment, stemming from a case concerning the alleged use of child soldiers in the Democratic Republic of the Congo, is expected very shortly. Two further cases are on trial, and some others are in the pipeline.

As you can see, over the last 70 years the world has witnessed a remarkable development of international efforts to hold perpetrators of mass atrocities accountable.

But the nature and context of these efforts has changed significantly over time.

Of course it is not incorrect to view the ICC as the latest in international mechanisms to address crimes that have occurred. Certainly ICC has become the default institution to look to if justice for international crimes seems otherwise unattainable.

But the long-term significance of the International Criminal Court, and the wider Rome Statute framework, lies elsewhere, in my view. What makes this new system fundamentally different from earlier efforts is its potential for the prevention of future crimes.

The potential for preventive effect appears in several different forms, and I would like to categorize them under the broad headings of deterrence, timely intervention, stabilization and norm-setting."

Judge Song also delivered the keynote address at the UNSW conference Justice For All? A ten year review of the international criminal court. A special report on the conference, featuring key particpants including Judge Song, was broadcast on ABC Radio National's Law Report.

From punishment to prevention

ICC deserves help in seeking justice for all