The current "faint" campaign for constitutional reform must be made more concrete and coherent if meaningful Indigenous recognition is to be achieved, UNSW Professor Megan Davis has told the Senate. 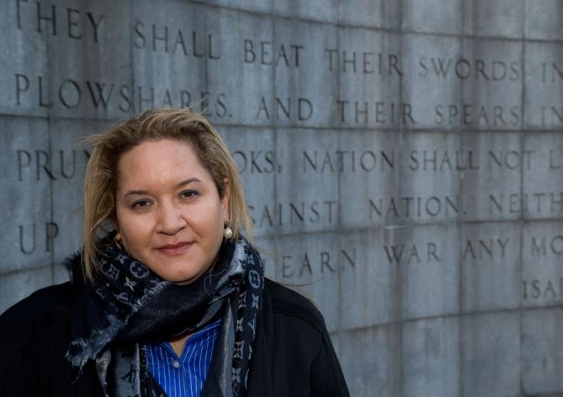 The campaign for constitutional reform must be made more coherent and offer concrete options if the current “faint” public discussion is to be transformed into substantial support for Indigenous recognition, UNSW Professor Megan Davis has told the Senate.

This means "recognition" must entail substantive changes not mere symbolic gestures, she said.

Professor Davis delivered the hard-hitting speech in an Occasional Lecture to the Senate last week.

Professor Davis is the director of UNSW’s Indigenous Law Centre and an elected member of the United Nations Permanent Forum on Indigenous Issues. She was also a member of the Prime Minister’s Expert Panel on the Constitutional Recognition of Aboriginal and Torres Strait Islander peoples.

Her Senate lecture was delivered four days before the release of a Joint Select committee interim report outlining options for how constitutional change should proceed.

The report recommends words of Indigenous recognition be written into the document, clauses permitting discrimination on the basis of race be deleted, and that race powers contained in the document be replaced with a new power to make laws for Aboriginal people.

In her speech Professor Davis said the lack of a concrete model for reform had left the so far “faint” public discourse open to be hijacked by extremists and those seeking to make “mischief”.

In addition those seeking substantive rather than symbolic changes are being portrayed as “activists” alienating the political mainstream, she said.

“I am a fully fledged supporter of recognition,” Professor Davis said in the lecture. “But what I do not want is mob backed into a corner where they feel obliged to accept another political confection.

“The relatively crude exercise of calculating reform on the basis of what minor, inoffensive gesture is likely to receive ‘bipartisan support’, and thus automatically a majority of states and a national majority, is at odds with the question of fairness and justice,” she said.

“If that were to occur… we would be the one state that had successfully executed assimilation in a way that the state never had to give an inch of space in its public institutions – its public law – to first peoples.”

Professor Davis cautioned there was a need to accept competing notions of constitutional 'recognition' – from the perspectives of the State and from Indigenous people.

She said Indigenous perspectives were predicated on notions of fairness and justice, and this required being honest about Australia’s history.

“This must involve a ventilation of stories of a narrative that is inclusive of Aboriginal and Torres Strait Islander peoples in Australia. This is not just about Aboriginal war veterans – this is about Frontier Wars and the Killing Times as well as the Protection era. It is about Stolen Wages. It is about the Stolen Generation. And then it is about forgiveness.

“This process has never occurred in Australia. This current iteration [of Constitutional recognition] is dislocated from reconciliation. And reconciliation will require reorientation if it is to achieve the ends of truth and justice.“

She said substantive reform was needed now more than ever. Countries that had engaged in reconciliation in good faith, such as Canada and New Zealand, were experiencing comparably better health and well being outcomes for their Indigenous peoples.

“This year’s closing the gap statistics revealed that life expectancy has not changed and unemployment went backward.  And yet the [Australian] polity continues to - condescendingly so - reject Indigenous ideas…,” she told the Senate.

She said in her speech she had wondered whether she was being too provocative by using Charles Perkins’ quote ‘living off the crumbs that fall off the White Australian tables’ as the title for her speech.

But she said proponents of substantive change had been giving similarly worded speeches for more than four years now, and it was time to “take seriously the characterisation of symbolic recognition as weak and insincere, and resistance as a stance worthy of defence.”