New laws ending the ‘right to silence’ when being questioned by police run the risk of causing the miscarriage of justice, the state’s former top prosecutor Nicholas Cowdery QC has told a UNSW public lecture. 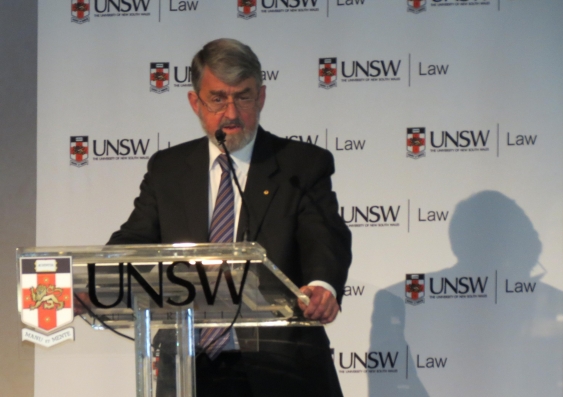 The recently introduced NSW laws ending the ‘right to silence’ when being questioned by police are an erosion of people’s rights and run the risk of causing the miscarriage of justice.

“We do have to deal with real crime, but some of the weapons we are giving ourselves to do so may turn out to be legal weapons of justice destruction.”

The laws, which came into effect on 1 September, mean that “unfavourable inferences” can be drawn if a suspect fails to mention something during official police questioning, which they then later rely upon in court in their defence.

The legislation was introduced by the state government following a series of drive-by shootings in Sydney’s western suburbs after which many victims declined to co-operate in police investigations.

“The legislation will produce great complications in the investigation, prosecution and trial processes,’’ Mr Cowdery said. “Why has the law been used to infringe longstanding rights for no clearly discernable gain and with the prospect of substantial injustice? Why do the politicians get away with it?”

"Too often criminal laws are the product of fleeting moral panic, real or imagined, on the part of persons with influence or the tabloid media."

Mr Cowdery, who is a Visiting Professorial Fellow at UNSW Law, also spoke of the need for drug law reform.

“The only sensible, principled, efficient and effective way to deal with drugs is to deal with all as we do with alcohol and nicotine, ” he said. “Legalise, regulate, control and tax them and try to limit or discourage their use by non-criminal means.”

In the wide-ranging lecture reflecting on a 45-year career, titled Criminal Justice and Criminal Law: A Pig in a Pole? Mr Cowdery said reform is also needed to enable voluntary euthanasia to take place without criminal sanctions – subject to appropriate safeguards.

The dangers of mandatory sentencing were also highlighted. “Mandatory sentencing for anything but minor regulatory offences is antithetical to the doing of justice. Diversionary programs for offenders and rehabilitation in prisons need to be given prominence and funded appropriately,” he said.  “While some people simply do need to be kept away from us, most are capable of returning to stable and law abiding lives in the community, given the right support.”

The greatest form of criminal injustice, Mr Cowdery said, remains our treatment of indigenous Australians. “Until the striking over-representation of Aboriginal and Torres Strait Islanders in our prisons is effectively addressed, they are not receiving justice of a quality that they should expect.”

Mr Cowdery was the NSW DPP from 1994 to 2011. He has appeared as a lawyer and barrister in most Australian jurisdictions, including the prosecution of the late Justice Lionel Murphy and the late Sir Joh Bjelke-Peterson.