Opinion Offshore processing centres are no place for children

On any cogent human rights analysis, it is difficult to see how transferring asylum seeker children to Nauru or PNG would ever be in their best interests, writes Jane McAdam. 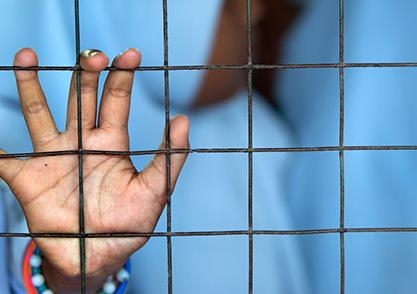 OPINION: Recent reports that three asylum seeker children have been transferred from Nauru back to Australia because of concerns about their health raises a more fundamental question that lies at the heart of Australia’s international legal obligations and decision-making. Can offshore processing in Nauru or Papua New Guinea ever be in a child’s best interests?

The United Nations High Commissioner for Refugees (UNHCR) yesterday released a report expressing deep concerns about the conditions of Australia’s offshore processing centres in Nauru and Papua New Guinea, finding that they do not meet international human rights standards.

UNHCR is of the view that no child, whether unaccompanied or within a family group, should be transferred from Australia to an offshore processing centre.

The UN Convention on the Rights of the Child is the most widely ratified international human rights treaty in the world. At its core is the principle that in any administrative action concerning a child, the child’s best interests will be a primary consideration. This requires government and judicial authorities to consider systematically how a child’s rights and interests will be affected by their policies or decisions.

It gives the child both a substantive and a procedural right to have their interests considered. It also requires legislation to be interpreted in the way that most effectively serves the child’s best interests. This applies to all children, irrespective of their immigration status.

As courts in the UK have observed, the “best interests of the child” is “a consideration of the first importance”. It requires a comprehensive assessment of the child’s identity, upbringing, ethnic, cultural and linguistic background, particular vulnerabilities and protection needs.

The Convention on the Rights of the Child provides a catalogue of rights that inform the “best interests” principle. This includes rights to an adequate standard of living, the highest attainable standard of health, medical care, education, and protection from violence. If sending a child offshore conflicts with these, then removal is not in the child’s best interests.

Only exceptional circumstances would outweigh this – for instance, if the child constituted a serious threat to security. The UN Committee on the Rights of the Child and UNHCR note that any such circumstances must be rights-based, and that non-rights-based arguments such as those relating to immigration control “cannot override best interests considerations”.

In the UK Supreme Court, Baroness Hale emphasised that while the cumulative effect of other considerations might outweigh a child’s “best interests”, it would be impermissible to:

…treat any other consideration as inherently more significant than the best interest of the children.

Traditionally, such considerations have related to whether or not it is safe for asylum seeker children to be returned to their country of origin if they do not meet the refugee definition. This is because the country of origin is the usual point of reference when a person’s removal is contemplated. Most countries conduct refugee status determination themselves, rather than transferring asylum seekers elsewhere.

However, the legal obligation applies with respect to any country to which removal is contemplated. Therefore, the obligation is also triggered by Australia’s offshore processing arrangements with Nauru and Papua New Guinea.

Even in Europe, where asylum seekers can be transferred to the first European country they entered (all of which are bound by the same human rights laws), the European Court of Justice has ruled that this is against the best interests of unaccompanied minors because it may unnecessarily prolong access to refugee status determination procedures. This is particularly significant given the delays in processing claims offshore in Nauru and Papua New Guinea.

Yet, in Australia, the best interests of the child are subordinate to the slippery notion of the “public interest”, which the government equates with protecting the integrity of Australia’s borders.

The highest courts of the UK and New Zealand have held that concerns about immigration control and border security are insufficient to override a best interests determination, and are contrary to the international legal obligation under the Convention on the Rights of the Child.

In Australia, the immigration minister is the guardian for unaccompanied asylum seeker children. There is a clear conflict of interest between the minister’s obligation to make the best interests of such children a primary consideration in any decision concerning them, and his desire to enforce a policy of offshore processing. This is why the Australian Human Rights Commission and others have called for an independent guardian for unaccompanied children.

Of course, a best interests determination should occur on an individual basis for every child asylum seeker, whether accompanied or not. On any cogent human rights analysis, it is difficult to see how transferring such children to Nauru or Papua New Guinea would ever be in their best interests.

Jane McAdam is Scientia Professor of Law and director of the Andrew & Renata Kaldor Centre for International Refugee Law at UNSW.