Europe's Roma and Jews have far too much in common. Let's be empathetic. Let's acknowledge our common history. And then, let's apply our resulting outrage to an ongoing injustice closer to home, writes Fergal Davis. 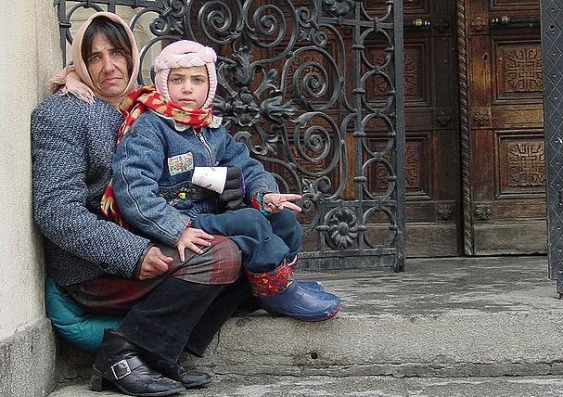 Roma family crouching to keep warm on the steps of the Russian Orthodox Church in Sofia, Bulgaria. Image: Wikimediacommons

OPINION: Sticks and stones they say: but we know that words can have consequences. Words often lead to violence. Jewish history teaches us that and events on Blair Street in Bondi confirm it. But we are not alone in seeing nasty words turn into terrible actions.

Europe's Roma (gypsies, travellers, itinerants) and Jews (you know the names) have far too much in common. We have been strangers in strange lands. We have wandered, denied the right to settle. We have maintained our language and culture in the face of persecution. Perhaps most significantly, we both suffered at the hands of the Nazi Holocaust.

Our common experience should resonate.

When I was a very young boy my mother worked in a childcare centre for Irish Travellers - Roma, Gypsies. She used to take me to work with her. I have no recollection of this at all but I am proud of my mum. A middle-class woman who chose to work with the Roma in Ireland in the '70s; and she brought her wee baby with her; shocking!

While we Jews may have become gentrified, the Roma have remained Europe's nomadic underclass. Distrusted and despised, for centuries the object of discrimination. And over the course of the past few weeks ongoing racism towards the Roma has been even more obvious.

It re-emerged with reports that a "blonde, blue- eyed" child had been taken into custody by Greek authorities.

The girl, "Maria ", had been living with a Roma couple. DNA tests  (eventually) confirmed that the child was not biologically related to the Roma guardians. That, on its own, does not prove that the child was abducted but the world's media were already speculating about the child "stolen by Gypsies":

Things for Europe's Roma were about to get a whole lot worse (if that is possible). Following on from the events in Greece, reports began surfacing in Ireland of "blond" children living with Roma families. The Irish authorities removed two children, a boy and a girl, from two different families. In both cases, DNA testing showed that the parents were, in fact, related to the children.

As a father of three, child abduction is my greatest nightmare. My wife and I back up our school's message about "stranger danger': We even turned my phone number into a song. The song ends - "that's my Daddy's phone number you can call it any time" - and we've taught our older kids to sing this catchy tune to lifeguards, police officers, anyone who will listen. We do not take the issue of child abduction lightly.

But I can recognise a racist trope when I see one. European literature is littered with references to Gypsies stealing children. Irish traditional music is full of charming itinerant workers who stay for the night and leave before sunrise with daughters.The reporting on "Maria" in Greece fed into a stereotype of the Roma as a nomadic people who steal children from settled people. The response in Ireland shows that such stereotypes echo.

As Jews, we know all about negative stereotypes. Our history is littered with blood libels and accusations about poisoning wells. Today, outside of the Middle East at least, such accusations are rare.

But as an Irish Jew it saddens me greatly that Ireland has behaved so appallingly to the Roma. I'm even more appalled that my home country has traumatised two children, disrupted two families and cast aspersions on a whole community over the past two weeks.

As Australian Jews, there is little that we can do for the European Roma. But perhaps we can learn from their current treatment; their stereotyping. Maybe we can connect it with our shared history. What was done to us has been done to the Roma.

There are groups closer to home who have also been treated appallingly. As Ireland rounds up blond Roma kids for DNA testing the first all Indigenous Australian AFL team is touring Ireland. While Irish authorities take children away from Roma families, we have our own stolen generations.

We need to do more than wring our hands and shake our heads at the actions of the Old World. States' governments have apologised; but the Australian constitution still (STILL) doesn't recognise the place of Aboriginal Australians. There is cross party support for change. There is Indigenous support for change. But the polies are paralysed by a fear that a referendum on Indigenous recognition would fail!

That would be catastrophic to race relations in this country and it would severely damage Australia's reputation abroad. We know what it means to be marginalised. As a result of that experience we can empathise with the Roma when they are racially profiled. All of that should awaken our sense of injustice and we should demand that our government move to recognize the place of the First Australians in our constitution.

Let's be empathetic to the position of Europe's Roma. Let's acknowledge our common history. And then, let's apply our resulting outrage to an ongoing injustice closer to home.

Fergal Davis is a senior lecturer at UNSW Law.

This article was first published in Australian Jewish News.