The High Court decision on asylum seekers detained at sea turned on a technical reading of statutory provisions. The fact remains that Australia is accountable internationally for its actions, writes Jane McAdam. 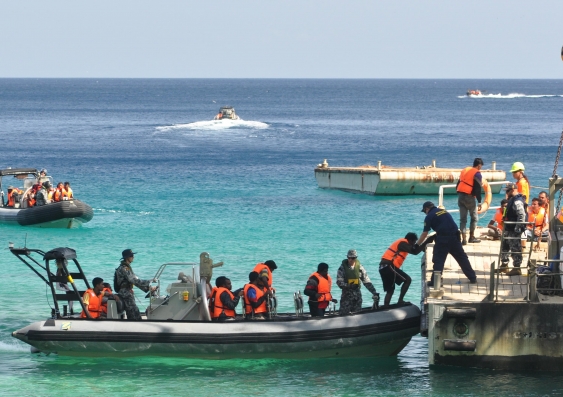 OPINION: The High Court has decided that the month-long detention of 157 Tamil asylum seekers at sea was legal under Australian law.

It was a narrow win for the government – three of the seven judges dissented. The decision turned on a technical reading of statutory provisions, not an assessment of Australia's international refugee and human rights obligations. It is important to understand the outcome within this context.

The plaintiff in the case was a Tamil asylum seeker from Sri Lanka. Along with 156 other asylum seekers, he was intercepted by an Australian border protection boat in June last year.

The people had set sail from a refugee camp in India but were stopped 16 nautical miles from Christmas Island. Cabinet's National Security Committee, a closed group of seven ministers, led by the Prime Minister, decided that the asylum seekers should be returned to India, in line with the government's policy that anyone seeking to enter Australia without a visa would be removed. The asylum seekers were placed on the Australian boat, which arrived near India 10 days later. The plan was to unload them in India. But India refused.

The broader issue – and the one that is front and centre in international law – is this: is Australia at liberty to send asylum seekers to places where they might be at risk of harm, either directly or because that other country sends them to such a place?

This brings us to the legal principle of non-refoulement, which prohibits countries from sending asylum seekers to any place where they have a well-founded fear of being persecuted for reasons of their race, religion, nationality, political opinion or membership of a particular social group.

This principle also prevents removal to a risk of torture, cruel, inhuman or degrading treatment or punishment, the death penalty, or arbitrary deprivation of life. These are Australia's international obligations, which are also reflected in the Migration Act.

The principle of non-refoulement travels with the state in all its guises. Australian naval, customs and immigration officials remain bound by it even when they act outside Australian territory or waters. This is because governments are responsible for the actions of their officials wherever they assert effective control.

What matters most is who is acting, rather than where.

The same rules apply in Europe, where unprecedented numbers of asylum seekers and migrants are crossing the Mediterranean. As the European Court of Human Rights has stressed: "The special nature of the maritime environment … cannot justify an area outside the law where ships' crews are covered by no legal system capable of affording them enjoyment of the rights and guarantees provided by the convention, which the states have undertaken to secure to everyone within their jurisdiction."

The United States has been a lone objector to the otherwise consistent view that the principle of non-refoulement applies extraterritorially. The US Supreme Court has been criticised for upholding this approach in the 1993 Sale decision, which examined the US's obligations in relation to Haitian asylum seekers intercepted at sea. That decision was based on domestic, not international, law, and must be confined to and understood within that context – just like this week's High Court decision.

The UN refugee agency, UNHCR, has protested constantly the US interpretation of the Refugee Convention. Further, no other government – apart from now Australia –  has ever objected to UNHCR's position. It is an important indication that other countries agree with UNHCR.

International law is binding on Australia. But in our legal system, courts cannot make decisions about Australia's international legal obligations unless they are also reflected in domestic law.  As Justice Keane explained in the High Court: "Australian courts are bound to apply Australian statute law 'even if that law should violate a rule of international law'."

The fact remains that Australia is accountable internationally for its actions.