The Foreign Minister's description of asylum seekers as economic refugees is inflammatory and part of an attempt to make the problem disappear, write Mary Crock, Michelle Foster and Jane McAdam. 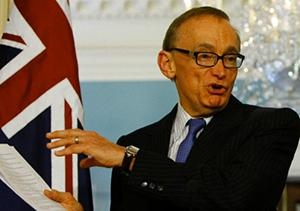 OPINION: The Foreign Minister calling asylum seekers economic refugees is inflammatory and will not make the problem disappear.

The new Prime Minister, Kevin Rudd, would be well advised to focus his attention on bilateral relations with Indonesia. Although inciting fears of military confrontation is very unhelpful, he is correct that opposition plans to push back asylum boats would place Australia on a collision course in more than one respect.

With or without Indonesia's consent, pushing back boats would cost lives - of asylum seekers and (potentially) of Australian naval personnel. The Expert Panel on Asylum Seekers acknowledged as much when it rejected the measure. Without plans for a solid regional framework to manage asylum flows, push backs would strain relations with Indonesia. Australia would again be acting in breach of international law.

While the nation stood transfixed last week by the dramatic return of Kevin Rudd as Prime Minister, Foreign Minister Bob Carr named the continuing surge in irregular maritime migration as the key policy issue facing the government. In comments endorsed by Rudd, he denounced the asylum seekers as ''economic migrants'' coming from ''majority religious and ethnic groups in the countries from which they are fleeing''. Turning his attack on the decision makers, Carr called for a ''tougher and more hard-edged assessment on asylum seekers'', suggesting that ''as a result of court and tribunal decisions it's coming up wrong [sic]''.

The Foreign Minister's assertions that maritime asylum seekers are all ''economic migrants'' - and that Australia is lenient in its processing of refugee claims - are inflammatory remarks that have no basis in fact. They demand a response.

While Australia is experiencing a surge in irregular migrants seeking protection as refugees, so are many countries around the world: this is a global trend. It is disturbing that so many are arriving by boat, risking lives in the process. However, it is not surprising that so many maritime asylum seekers are found to be refugees - people who have a ''well-founded fear'' of being persecuted for one of the five Refugee Convention reasons: race, religion, nationality, membership of a social group or political opinion. The simple truth is that using people smugglers to reach Australia by boat is dangerous and difficult. It is not an option taken lightly or for no good reason.

This cry of ''economic migrants'' seems to be the next step in the government's attempt to make asylum seekers disappear. First came the revival of offshore processing (out of sight, out of mind). Then the excision of the mainland from the migration zone to prevent those arriving by boat from claiming asylum on any part of Australian soil. Now the Foreign Minister attempts to suggest there are no refugees at all, by denying the very character of those coming by boat.

The Foreign Minister's attack on the tribunals and courts is particularly worrying. Australian law adopts the standard for determining who is a refugee set under international law. The same definition is applied across the world wherever people seek asylum. Both the Refugee Review Tribunal (RRT) and the courts take into account international case law, and guidance from the UNHCR, in interpreting this international standard to ensure that Australia's interpretation is broadly consistent with that taken in other comparable countries.

These attacks are neither warranted nor wise. The RRT provides a cost-effective and efficient system of administrative review and greatly reduces the case load that would otherwise be borne by the courts, including the High Court. The guarantees in the constitution mean it is impossible to exclude the High Court from the oversight of refugee decision making. Constraining the ability of a tribunal or inferior courts to review government decisions always leads to a higher number of applicants seeking review in the High Court. This is in nobody's interests.

The irony is that current government policies are rapidly creating an entirely unnecessary crisis in public administration. The ''no advantage'' principle (adopted after the release of the expert panel report) means that no refugee claims have been determined at all for asylum seekers arriving after August 12, 2012. By the end of this year, the backlog will be approaching 30,000. Until assessments are undertaken, nobody will know whether these people are refugees or not.

The Foreign Minister should encourage the new Prime Minister to order the immediate processing of these asylum claims. If there are ''economic migrants'' in the mix, the ''no advantage'' principle means that these people will remain for years in Australia, Nauru or PNG - in miserable conditions, costing us billions. It is indeed a policy that delivers no advantage to Australia.

Irregular maritime migration poses challenges capable of no easy solution. However, nothing is to be gained by adopting unprincipled, illegal and unworkable policies. We simply cannot afford them.