UNSW Law has announced the recipients of the generous John M Green and Ngoc Tram Nguyen scholarships, which help high achievers study at university regardless of their background. 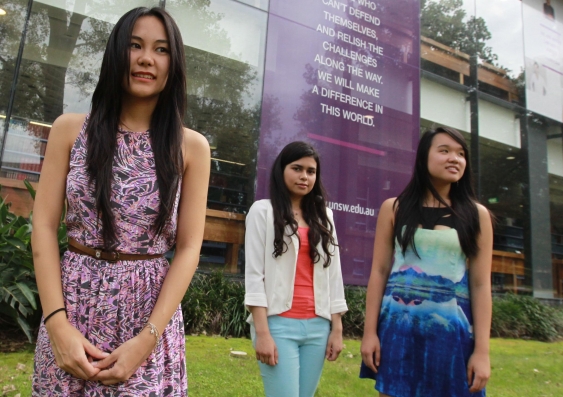 Scholarships are one of the best ways to ensure high achieving students make it to university regardless of their background, says UNSW Law Dean Professor David Dixon.

UNSW Law recently announced the three recipients of its most generous scholarships: the John M Green and the Ngoc Tram Nguyen scholarships.

All three high achievers were part of the recent intake into first-year law. Kathy and Raisa are studying combined Commerce/ Law while Leanne is enrolled in Arts/Law.

UNSW’s ATAR cut-off for Law this year was a record 99.7. However, under the University’s ACCESS scheme, the Faculty offered more than a quarter of its places to high-achieving students who had experienced long-term educational disadvantage.

"The ATAR is only one indication of people's ability,'' Professor Dixon says. ''Someone who comes out of a nonselective public school in south-west Sydney and gets an ATAR in the mid-90s is as good as somebody getting 99-point-plus from a private school in the eastern suburbs."

Professor Dixon told the Sydney Morning Herald he sees the scholarship winners as "flag bearers for their communities".

"It's about raising the aspirations of young people by giving them examples of what's possible," he said.

The generous John M Green scholarships, each worth $100,000 over five years, enable eligible HSC graduates to complete an undergraduate combined law degree of their choosing at UNSW. The scholarship is designed to cover living and study expenses, enabling recipients to focus on their studies and gain the maximum benefit of the experiences offered at UNSW.

The scholarships were made possible by a donation from John M Green, an alumnus who was in the Faculty’s inaugural class of 1971. Now a leading company director, social entrepreneur, business writer and novelist, Mr Green has said education is “a great elevator”.

“My parents escaped war-torn Europe, arriving here with little education, no money, no English and no jobs, but passionate their kids receive the education they couldn’t.

“UNSW and its Law School were critical in opening the paths I have since taken, and helped inspire me and many of my classmates to make a difference in our later lives well beyond making money,” he said.

The Tram Nguyen scholarship was established by Professor Dixon and Professor Lisa Maher from UNSW’s Kirby Institute in 2011, in memory of a former student who came to Australia as an infant refugee. Tram enrolled in UNSW’s Preparation Program as a first step to studying law but tragically died before she could fulfil her dream.

This year, for the first time, the Tram Nguyen scholarship, which targets high achievers from Sydney’s south-west, was partially crowd-funded by a group of recent law graduates, using the Pozible website.

For Leanne Trinh, the $5,000 for each year of her degree will ensure she has the financial support to complete her course.

She says the ACESS Scheme and the chance of a scholarship encourages students to aim high regardless of their background.

"Young people in my area, from a low socio-economic background, sometimes feel discouraged because we don't get the full tuition that private schools get,” Leanne told the Sydney Morning Herald.

"To have a program [that helps us access university] is very encouraging because it breaks down that mental barrier we might have to getting into uni or a course that's hard to get into," she said.

Raisa told the Herald she too was confident she could achieve her goals: "I don't have to be let down simply by my socio-economic background."

Read more about UNSW's scholarships and the ACCESS scheme in the Sydney Morning Herald.

Read about crowd funding and the Tram Nguyen scholarship here.