Legal aid is a crucial element of a fair and efficient justice system founded on the rule of law – and in the case of asylum seekers, it may be the difference between life and death, writes Jane McAdam. 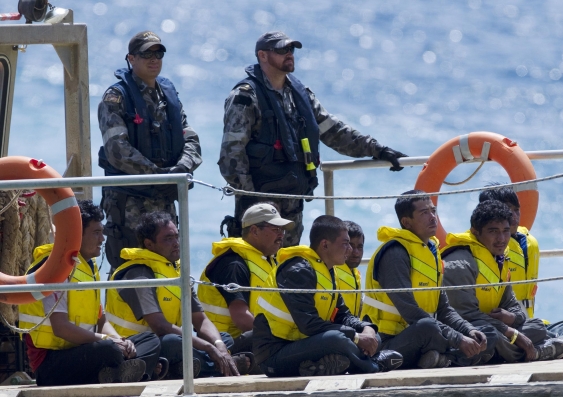 OPINION: The government has ceased funding legal assistance for asylum seekers who came by boat and for those in immigration detention, arguing the move will save taxpayers millions of dollars a year.

This is a bad idea for many reasons. It doesn’t serve the interests of asylum seekers, decision makers, or a country founded on the rule of law. And, along with offshore processing, it will end up costing the country’s bottom line far more than the dollars it saves.

The Australian legal system is complicated at the best of times. It is particularly bewildering for people who do not speak the language and come from a different political and cultural context. Most asylum seekers also do not have the money to pay for a lawyer, and this is why legal assistance is crucial.

Asylum seekers are particularly vulnerable because they do not have the protection of their home countries. Many have been forced to flee very quickly, and so do not have belongings or identity documents with them. They generally do not have family or social support structures within Australia, and are reliant on NGOs for material and psychological support. A large number have suffered trauma, violence, torture or sexual assault.

Legal aid is a crucial element of a fair and efficient justice system founded on the rule of law. It helps to ensure fairness and public confidence in the way that justice is administered. It helps to eliminate barriers that impair access to justice for those otherwise unable to afford legal representation. In the case of asylum seekers, it may make the difference between life and death.

Refugee lawyers provide a very important "triage" service which helps to improve the quality and efficiency of decision making. Because of their specialised understanding of the law and the social and political conditions in the countries from which asylum seekers have fled, they do not automatically take on every case, but only those with merit. They help prevent the courts from being flooded with unmeritorious claims.

Refugee lawyers also help asylum seekers to prepare their statements in a coherent way. They identify relevant evidence, weed out irrelevant material, and help decision makers focus on the key aspects of the claim. When asylum seekers are unrepresented, judges have to spend a lot more time preparing for and running hearings to ensure that litigants are aware of the process, understand the possible outcomes, and feel like they have had a fair hearing (even though the judge cannot decide the merits of the asylum claim). This is inefficient on many levels.

When an asylum seeker meets with their lawyer, it is often the first time they have ever told anyone about what has happened to them. Without the assurance of client confidentiality, and the support of experts trained in assisting vulnerable people, this experience could prove even more traumatising.

In fact, the government’s policy places a significant burden on government officials deciding the fate of asylum seekers. They have to deal with vulnerable, often traumatised people, who don’t understand the process and may be very fearful of authorities. People suffering from trauma are often unable to recount their experiences in a lucid, clear way, especially in the short timeframe of an asylum interview. It takes time to build up trust and share very personal details. Sometimes, an asylum seeker will not appreciate what kind of information might be crucial to their claim. Often, the decision-maker won’t have sufficient information before them.

The bottom line is that without legal assistance, there is a real risk that refugees will be sent back to persecution and other serious forms of harm. Research shows that we get better decisions when asylum seekers have early access to properly resourced legal services by specialist lawyers. Legal assistance helps governments to correctly identify protection needs, and ensure that they do not violate their international legal obligations by removing refugees to persecution and other forms of serious harm. The end result is one that is in the best interests of us all – legally, ethically and from an efficiency perspective.

Finally, the government’s argument that scrapping legal aid for asylum seekers will save millions of dollars a year is a red herring. Without the triage service provided by refugee lawyers, it is possible that some unscrupulous migrant agents may exploit the opportunity to drag out proceedings, resulting in unmeritorious court appeals and a further clogging of the system. This would be more costly than legal aid. And if the government were really concerned about costs, then it would reconsider the billions of dollars being spent to run offshore processing centres and Australia’s immigration detention network.

Allowing asylum seekers to live in the community, with access to legal aid, would save many millions more.

This opinion piece first appeared in The Guardian Australia.