Opinion States should test the waters on same-sex marriage

No state going it alone can bring about full marriage equality, but there are nonetheless good reasons for NSW to begin Australia's journey down this path, writes George Williams. 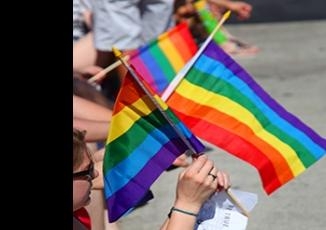 OPINION: Kevin Rudd's commitment to same-sex marriage came under the spotlight again in this week's debate with Tony Abbott, when he promised to introduce a bill to legalise it within the first 100 days if he is re-elected. But there's every reason to believe the states may beat him to it, and go it alone on the same-sex legal issues, as was the case with marriage between a man and a woman at Federation in 1901.

The recent report by NSW Parliament's standing committee on social issues is a watershed moment in the debate over same-sex marriage laws in Australia. It clarifies for the first time that a state can enact a law to recognise gay marriage.

This should not be surprising. Australia, after all, is a federation. We adopted this structure for good reason, including so that ideas and policies can be tested first at the state level before being adopted nationally.

States have led the way on many social initiatives, including protection against discrimination and the recognition of de facto relationships. They are also capable of beginning the move towards same-sex marriage. Indeed, it would be surprising if same-sex marriage did not first emerge at the state level. Some changes don't take hold in Australia until one or more states have tried them first.

This is not to say that a state same-sex marriage law is free of legal uncertainty. It is clear that the states have the power to pass such a law, but it is arguable, though uncertain, that their law would be inconsistent with the federal Marriage Act. If the High Court found this to be the case, the state law would not be struck off the statute book, only rendered inoperative for as long as the inconsistency remained.

The legal uncertainty is not limited to the states. As the NSW report recognises, there is also doubt about whether the Commonwealth can pass a same-sex marriage law. The Constitution gives the federal parliament power over "marriage", but the High Court has not said what this term means.

The key question is whether federal power is limited by the view of the 19th century framers of the Constitution that "marriage" means a union between a man and a woman, or has evolved to encompass other relationships. The bottom line is that whichever parliament first legislates for same-sex marriage, a High Court challenge will likely follow.

The prospect of a challenge should not deter legislators. Australia's 112-year-old Constitution regularly throws up unresolved legal questions about new policies. The words of the Constitution were drafted in the age of the horse and buggy, and so can sometimes be a poor fit for solving contemporary problems.

It is often the case that legislators must enact laws knowing that the issue will be examined in court. The introduction of plain packaging for tobacco products is a good example. A challenge to that policy was announced well before the enactment of any legislation, and yet the federal Parliament proceeded, rightly, to pass the law. The law survived a constitutional attack in the High Court.

This illustrates a basic feature of the separation of powers in Australia. It is the job of parliamentarians to pass laws in the interests of their community. It is not their job to determine the constitutionality of those laws. That is a question for the courts.

The same-sex marriage debate has been bedevilled by state and federal politicians hiding behind the issue of constitutional uncertainty. This has proved convenient for politicians who oppose marriage equality, but are not prepared to say this publicly. Some have been able to hide personal prejudice behind a legal smokescreen.

The NSW report shows that this position is no longer tenable. Parliamentarians will need to focus on the policy issues. They should cast their vote according to whether or not they believe it is right to recognise same-sex marriage, not according to some speculative assessment of what the High Court might say on the legalities of such a move.

After all, forecasting what the High Court might do is notoriously difficult. It has a long record of defying predictions about its decisions. For example, many people believed that there was little chance of the High Court striking down the Gillard government's Malaysian solution, yet that is what occurred. The task of prediction is made more difficult today because two of the Court's seven judges have just been replaced, with another two to follow in 2015.

Even though the NSW report makes it clear that the states can lead the way on same-sex marriage, it also rightly finds that this is not the best, long-term outcome. No state going it alone can bring about full marriage equality.

A state can recognise same-sex marriage, but cannot force this onto other states or the Commonwealth. This is why the best outcome remains recognition of same-sex marriage at the federal level. It may just be the case that federal recognition will not occur until a state has moved first.

NSW cannot alone achieve national marriage equality, but there are nonetheless good reasons for it to begin Australia's journey down this path. One parliament in Australia needs to begin the process, and NSW seems as good a place as any to start.

Professor George Williams explains why a state same-sex marriage law could come with its own set of challenges.