'Stopping the boats' not enough

Refugee law experts led by UNSW have written to the government's Expert Panel, urging an expansion of Australia’s resettlement intake and a strengthening of refugee protections. 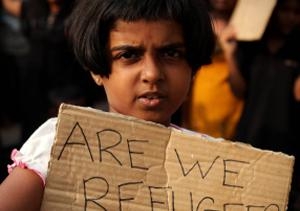 Border protection policies being considered by the major political parties are not durable solutions but designed simply to ‘stop the boats’ and spare Australians the discomfort of witnessing the suffering and death of asylum seekers, refugee law experts say.

A group of 17 legal experts has made the comments in a submission to the Expert Panel set up by the Gillard Government to break the political deadlock on the issue. The panel’s Advisory Group meets in Canberra for the first time this week.

Instead the group has called for a multi-dimensional response that includes a significant expansion of Australia’s resettlement intake, and investment in strengthening the quality of protection in regions and countries of asylum or transit.

“The government is presenting its Malaysia Arrangement and the Coalition is presenting its Pacific Solution as the answer to saving asylum seekers’ lives, when, in fact, both are policies designed simply to ‘stop the boats’,” the experts write.

“If Australia is serious about doing more than simply sparing itself the discomfort of being witness to, or even complicit in, the suffering and death of those who seek our protection – whether at sea or more generally – then it needs to consider a multi-dimensional response that positions the asylum seeker at the centre of its sphere of concern.”

A multidimensional approach would call “not only for a significant expansion of Australia’s resettlement intake, but also for an approach that strengthens the quality of protection in regions/countries of asylum or transit other than as a self-interested quid pro quo for receiving transferred asylum seekers,” they write.

“It also calls for a meaningful review of the practical and legislative impediments to asylum seekers travelling to Australia safely, including carrier sanctions and the refusal of visas to people regarded as an ‘asylum risk’.”

The experts stress that Australia is not being flooded by asylum seekers: “The numbers on any comparative analysis are very small”.

“While saving lives at sea is of utmost importance, a liberal human rights approach recognizes that this cannot be done at the expense of blocking refugees’ access to international protection,” they write.

The submission notes that the 1951 Refugee Convention, to which Australia is a party, is premised on the understanding that States will protect refugees in their territories, or cooperate with other States to find durable solutions for them (local integration, voluntary repatriation, and resettlement).

“Any transfer agreement must, at a minimum, ensure that the asylum seeker will be admitted, enjoy effective protection against refoulement, have access to a fair and effective asylum procedure, and be treated in accordance with international refugee and human rights law and standards.

The submission has received endorsements from refugee law academics in the UK, US, Canada and the Netherlands.

A copy of the submission is available here.