It is time for us to take the steps that would finally unite us as one people and recognise that true reconciliation with Aboriginal Australians requires a treaty, argues George Williams. 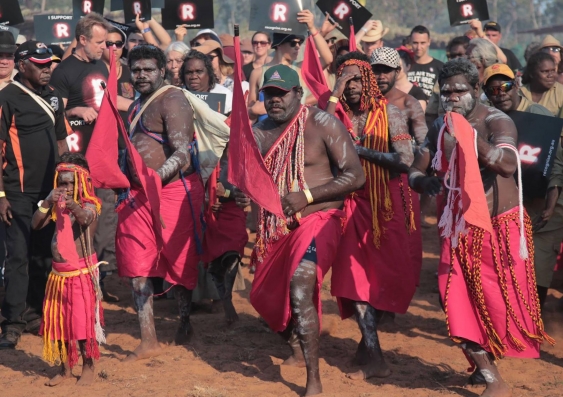 OPINION: Treaties and other forms of agreements are accepted around the world as the means of reaching a settlement between indigenous peoples and those who have settled their lands.

Treaties can be found in countries such as the US, Canada and New Zealand. Indeed, in nations such as Canada, new treaties are still being made.

Australia is the exception. We are now the only Commonwealth nation that does not have a treaty with its indigenous peoples. We have never entered into negotiations with them about the taking of their lands or their place in this nation.

Rather than building our country on the idea of a partnership with Aboriginal people, our laws have sought to exclude and discriminate against them.

This is reflected in the text of our constitution, which in 1901 created the Australian nation. That document was drafted at two conventions held in the 1890s. Aboriginal people were not represented, nor were they consulted in the drafting of the constitution.

Indeed, they were viewed by the drafters as a dying race, and the Australian legal system was premised on the idea that they had no long-term future in the Australian nation.

Until the Mabo case in 1992, this was reflected in the idea that Australia was terra nullius, or no man's land, when white settlers arrived in 1788. For the purposes of our laws, it was as if Aboriginal people simply did not exist.

So it is no surprise that the constitution was drafted to deny Aboriginal people their rights and their voice, even in their own affairs.

Some of these things were fixed with the 1967 referendum. It:

On the other hand, the referendum did not change the preamble or section 25.

Today, we have a constitution that ignores the existence of Aboriginal people and recognises that people can be denied the vote on account of their race, and that laws can be passed that discriminate against people for the same reason.

Given this history, it should come as no surprise that the white settlers never entered into one or more treaties with Aboriginal people.

The question today is how we can end this pattern of exclusion and discrimination. Constitutional change is certainly part of the answer but so is a treaty. These are separate debates but they represent two things that need to be done.

The idea of a treaty goes back many years. The failure to enter into a treaty was lamented in the early days of the Australian colonies. For example, the governor of Van Diemen's Land, George Arthur, presided over a period of great conflict known as the Black War and in 1832 remarked that it was "a fatal error . . . that a treaty was not entered into" with the Aboriginal people of that island.

In more recent times, a call for a treaty was made at the Corroboree 2000 convention, and the Council for Aboriginal Reconciliation identified a treaty as unfinished business of the reconciliation process. It recommended:

That the Commonwealth Parliament enact legislation . . . to put in place a process which will unite all Australians by way of an agreement, or treaty, through which unresolved issues of reconciliation can be resolved.

By a treaty, I mean nothing more than an agreement between governments and Aboriginal peoples. Such an agreement could involve three things:

A treaty about such matters could recognise the history and prior occupation of Aboriginal people of this continent, as well as their long-standing grievances. It could also be a means of negotiating redress for those grievances and helping to establish a path forward based upon mutual goals, rather than ones imposed on Aboriginal people.

At the heart of the idea is the notion that a place in the Australian nation cannot be forced on Aboriginal people. It needs to be discussed and negotiated through a process based on mutual respect that recognises the sovereignty of Aboriginal people.

By contrast, what we see today, at best, is only consultation with Aboriginal people. This is worthwhile but will not be enough.

The international evidence is compelling in showing that listening to indigenous people is, by itself, insufficient to bring about real change. Change must be built on the genuine partnership between indigenous people and governments that can arise through the making of a treaty.

The evidence in the US and Australia shows time and again that redressing disadvantage over the longer term depends on indigenous people having the power to make decisions that affect them. They must be responsible for the programs designed to meet their needs, and must be accountable for the successes and failures that follow.

This is not only necessary, it is the best and most efficient way. The Harvard project's headline finding is that when Native Americans make their own decisions about development approaches, they consistently out-perform external decision makers, on matters as diverse as governmental form, natural resource management, economic development, healthcare and social service provision.

Positive change in Australia depends on Aboriginal people having more control over their lives. Improvements in education, employment and quality of life must be achieved by policies and programs owned and developed by the people affected.

Success cannot be imposed from Canberra. The hard work must be done by Aboriginal people.

The problem in Australia is that we lack the laws and institutions necessary for Aboriginal people to make such decisions.

Unlike nations such as New Zealand, Canada and the US, agreements such as treaties have not been reached that recognise a measure of indigenous sovereignty. Instead, in Australia, decisions have often been imposed on Aboriginal people by parliaments and governments lacking even a single indigenous member.

A negotiated treaty with Aboriginal people would mark an important break from a system that for many decades has disregarded the views of Aboriginal people, and reinforced their feelings of powerlessness. A treaty could give rise to stronger, and more capable, institutions of Aboriginal governance.

This is not to suggest there is any quick and easy fix. It is simply to say that a treaty is one piece of the puzzle. It is something that needs to be done both to achieve reconciliation and underpin long-term Aboriginal prosperity.

Prime Minister Tony Abbott spoke about such matters in Parliament last year in a speech in support of a Bill for the recognition for Aboriginal peoples. He has not positively supported the idea of a treaty but has spoken in a way that recognises the need to change.

He said: "Australia is a blessed country. Our climate, our land, our people, our institutions rightly make us the envy of the earth; except for one thing – we have never fully made peace with the first Australians. This is the stain on our soul that prime minister Keating so movingly evoked at Redfern 21 years ago.

"We have to acknowledge that pre-1788, this land was as Aboriginal then as it is Australian now and until we have acknowledged that, we will be an incomplete nation and a torn people.

"We only have to look across the Tasman to see how it all could have been done so much better. Thanks to the Treaty of Waitangi in New Zealand two peoples became one nation."

Tony Abbott got it right. Now is the time to take the steps that would finally unite us as one people. Other countries have done this, however imperfectly. They, unlike Australia, have recognised that true reconciliation requires a treaty.

This speech, delivered this week to the Intelligence Squared debate, was first published in The Sydney Morning Herald.

Right, you lot, it's time we seceded