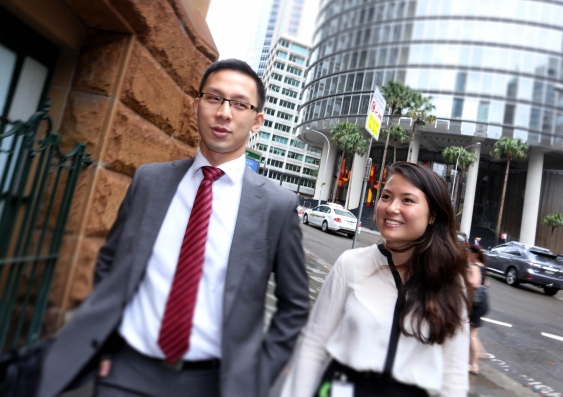 Emily is one of three Australia-at-Large scholarship winners, awarded from among the runners-up in each state and territory category.

She joins her friend and fellow UNSW Arts/Law graduate Sean Lau, who was named the 2015 NSW Rhodes Scholar in October.

“I was really happy, of course, but I was also in shock. I think that shock will last a while,” said Emily about the announcement, which was made two months after the state competition.

“Like Kunal and Sean before her, it’s hard to know where to start with Emily.

“She epitomises the best of UNSW Law: extraordinary academic talent combined with an enthusiasm to take part in and contribute to all the best aspects of Law School life and to community activities.

“She will be an outstanding Rhodes Scholar, exemplifying the combination of academic brilliance, personal qualities and community engagement.”

Established in 1903, the Rhodes is the oldest and most prestigious international graduate scholarship program in the world. A class of 83 outstanding all-round scholars is selected each year to study at Oxford.

Emily, who graduated with First Class Honours and the University Medal in Law as well as being valedictorian, will study a Bachelor of Civil Law and Master of Public Policy at Oxford, continuing her interest in Indigenous issues and environmental law.

“The Bachelor of Civil Law is one of the best Masters-level law degrees in the English speaking world, and its teachers include world experts in private law and international environmental law in particular,” Emily said.

“When I come back, I’m interested in working at an Aboriginal state land council or a public-interest law firm, and eventually in government as a policy or legal officer.”

Since graduating in 2013, Emily has been working in Canberra as an associate to Chief Justice Robert French at the High Court of Australia, a position she describes as “challenging and very interesting”.

“The High Court hears a broad range of cases. Just over the past few months there have been several cases on migration issues, we travelled to Queensland for a case on the constitutionality of certain 'bikie gang' legislation, and last week there was a case on native title.”

Emily says heading to Oxford at the same time as her UNSW Law colleague and good friend Sean Lau is a “lovely” bonus.

“We went to high school together – he’s one’s of my oldest friends.

“It’s lovely to have a friend who’s so intelligent, but who doesn’t take work so seriously that you can’t relax and enjoy each other’s company.”

Sean says: "I was really, really happy when I heard that Emily got the Rhodes, having been friends with her for ages. She's an incredibly bright and thoughtful person, and it's going to be a blast to be at Oxford at the same time."

Emily believes UNSW Law’s emphasis on social justice and practical learning – through mooting competitions, and internships at public-interest organisations and academic journals – is the secret to the faculty’s Rhodes successes.

In 2013, she was part of a team that won its way to Washington DC for the quarterfinals of the Philip C Jessup International Law Moot – the largest and most prestigious simulated court competition in the world – where she was named best overall speaker.

“That practical experience really helps when interviewing for jobs or scholarships. I doubt I would have been a candidate [for the Rhodes] if it weren’t for the mooting coaching and general mentoring I received from the faculty.”