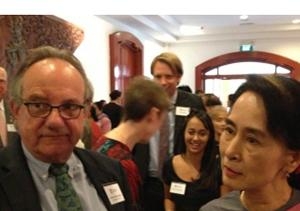 Professors Martin Krygier and Adam Czarnota spoke at the landmark event, lecturing on the Rule of Law and Transitional Justice respectively, two burning issues in the politically turbulent country.

The UNSW Law academics were part of a large delegation of experts led by Sydney Law School’s Professor Wojciech Sadurski. Ms Janelle Saffin, Federal Member for Page and Patron of the Constitutional Reform in Myanmar Project, volunteered her experience alongside academics from the Australian National University, University of Victoria in Canada and National University of Singapore.

Nobel Peace Laureate and Chair of the National League for Democracy, Aung San Suu Kyi, attended alongside members of her own party, the ruling Union Solidarity and Development party, military and ethnic parties from Shan, Kachin, Karen and other regions.

Participants agreed that with the 2015 elections looming, the conference was timely in moving Myanmar towards democracy. The sentiment was that the current constitution from 2008 is hindering this ultimate aim for the country.

“What’s going on there is so important and so difficult, it’s not clear how things will develop. But the workshop was an extraordinary event,” Professor Krygier said.

“Many of these people had never been in the same room before, let alone talked to us and each other for three days. We all felt we had participated in something truly significant, and we are anxious to keep doing it.  The stakes are simply so high,” he said.

Aung San Suu Kyi told a press conference she was keen to continue the work started by the workshop.

"I would like to amend the Constitution as soon as I can. If [the government] really want to change the constitution, there's no reason not to fully collaborate with them," she said.

Delegates reached near consensus on a number of suggested reforms to the constitution which included:

Professor Krygier will return in November to teach on the Rule of Law at several local law schools. UNSW Law academics Colin Picker, Carolyn Penfold, Lisa Toohey and Brendan Edgeworth will also meet with colleagues from Myanmar at a legal education conference in Hanoi later this year.