Consumers who benefit from the clothing industry's addiction to cheap labour must take some responsibility for the Bangladesh factory deaths, writes Alecia Simmonds. 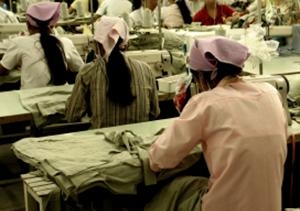 OPINION: Western consumers must take some responsibility for the Bangladesh factory deaths.

The first thing Shariful noticed was debris falling from the ceiling. Then he heard a crash as the factory floors gave way and the building crumpled. He fell from the seventh to the first floor ''faster than an elevator's speed''. Next he heard people screaming: mostly women and children.

There were three creches in the eight-floor factory. When Shariful gained consciousness he saw dust. He felt a sewing machine crushing his left leg and then he saw death. Everywhere. He didn't know this, but a pregnant woman went into labour around this time. Of course she shouldn't have been at work. No one should have been at work. Factory inspectors ordered the building be evacuated the day before but the owners ignored them. Workers who complained were threatened with dismissal. So the 3000 workers filed into the Dhaka factory last Wednesday against their will. As I write, the death-toll is nearing 400, but is predicted to rise to 1000.

I was lying in bed chatting on Skype to a friend who is living in Dhaka when I learnt about the collapse. It was 9pm and I was already in my pyjamas: Benetton pyjamas in fact. My floor was its usual mess, strewn with clothes I had proudly bought for $10 or less from Big Bargain Discounts as well as more respectable work clothes: Gap, Zara, H&M and Levi's. ''It's OUTRAGEOUS,'' I railed, ''the factory owners made them go back to work when they knew the building was unsafe.'' My friend agreed. We also tsked the government for doing so little to enforce basic safety standards for workers.

But as I hung up the phone the question of fault nagged me. There I was clothed in pyjamas that had been made if not in that factory then in one like it. The labels found inside the collapsed factory included Benetton, Mango, Joe Fresh, Primark and C&A. My floor was littered with dresses and T-shirts that had been run through the sewing machines of people working in prison conditions or even possibly now dead.

When I buy food I always ask where it has come from, but the same question never arises when I buy clothes. Any qualms about how much a worker must be getting paid, if I manage to get a shirt for $10, are repressed. But as First World consumers of Third World products, how responsible are we for what happened in Dhaka? And if I would never buy battery hen eggs then why would I buy clothes made in similar conditions? And why are there no warning labels on clothing such as we now expect to see on food?

The question of responsibility stretches from the global to the minutiae, from international labour standards to the clothes racks of Myer. It's a question that stems from our commercial imperialist past and will continue into our neo-liberal future. And it's a question that centres on the lives of women.

We could start by blaming the illegally built building, although it's certainly not the first. Five months earlier, 112 workers died in a fire in the Tazreen garment factory. The workers burnt to death because the gates had been locked from the outside. We could also blame the fact that there are only 18 inspectors to monitor the 100,000 factories in the Dhaka area. Or we could blame the fact that all foreign retailers except Tommy Hilfiger, Tchibo and Calvin Klein have refused to sign the Fire and Building Safety Agreement that would establish a system of independent factory inspectors. All this is true, and terrible, but there's a larger context.

The only reason why clothing companies go to places such as Bangladesh, Cambodia, or the US-Mexican border, is because they're on a hunt for cheap labour and they no longer want to invest in building factories. The minimum wage in Bangladesh is $37 per month and there is an entire shadow economy that pays even less. The profit margin for Bangladeshi manufacturers is low so they subcontract out labour to factories with illegal risky practices. While the foreign retailers report stellar annual profits, some Bangladeshi manufacturers barely break even. The only way they can make profits is by increasing work hours often to 12-14 hour days, and avoiding safety regulations and environmental standards.

As global capital sniffs like a ravenous wolf around the world in search of cheap labour, who are the workers who end up caught in its jaws? Liesbeth Sluiter from the Clean Clothes Campaign estimates 84 per cent of workers in the global clothing industry are women; 30-40 million women worldwide.

Fauzia Ahmed says factories prefer women because they're excluded from male-dominated union movements and so are less likely to strike. And because they're women they're paid less, even in instances where they do the same work as men. Most of these women are young, poor and rural. They are as Sluiter describes: ''Women whose children sleep beneath the sewing machine and begin to help out as soon as their fingers can manage to thread a needle; some who wear nothing but black clothes to work when menstruating, because toilet visits are restricted and stains on their clothes will shame them; pregnant women who stand all day; women who are sexually harassed and psychologically intimidated.''

Surely there is no other issue where First World women's consumerism collides so dramatically with the conditions of Third World women. I think we should demand that labels be placed on clothing so that we know what we're buying. Second, we try to buy locally and less. Third, we campaign with feminists from the global south who have demanded labour standards be established by the International Labour Organisation and enforced with sanctions by the World Trade Organisation. Capitalism is a prowling, salivating beast that needs to be tamed with regulation and personal ethics.

Alecia Simmonds is a lecturer in Law at UNSW.

Business as usual is no longer an option