50% of surveyed NSW coastal users don’t think that sea level rise will impact them, a report into the NSW community’s views on coastal hazards shows. 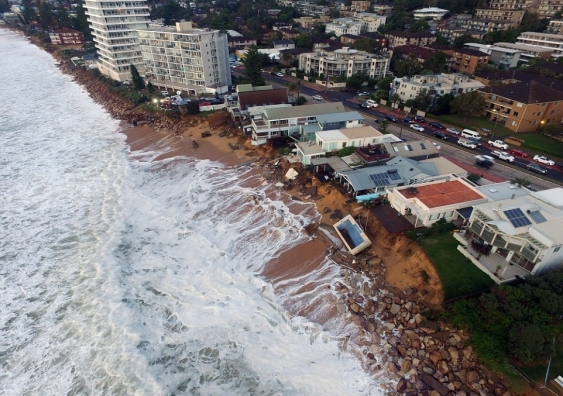 Half of NSW’s coastal community thinks rising sea levels will not impact them directly, new data released today by UNSW scientists has shown – and 25% of surveyed accommodation businesses situated close to the coast are unsure if sea level rise is even occurring.

The report – released on the anniversary of the 2016 East Coast Low ‘superstorm’ that saw widespread damage along Australia’s east coast, including the collapse of a Collaroy swimming pool – describes what the NSW community understands about coastal erosion and inundation, as well as the driving forces behind these hazards: sea level rise and severe coastal storms.

“Our coastline is changing. Many locations along the NSW coast are seeing amenity loss and infrastructure damage associated with erosion and inundation – that is, the flooding of normally dry land by sea water, often caused by storms surges or king tides,” says Professor Rob Brander from the School of Biological, Earth and Environmental Sciences, who is also known as “Dr Rip”.

“These storm events will continue in the future. Combined with anticipated sea level rise, they’ll only enhance the extent and cost of coastal erosion damage and lead to greater inundation of coastal zones throughout NSW in the future, particularly in low-lying estuarine areas,” he says.

The researchers say people’s understanding and perception of storms and sea level rise, and their associated impacts of erosion and inundation, can significantly influence how and whether they engage in coastal adaptation actions – often influencing the success or failure of those actions.

“That’s why we wanted to find out what coastal communities understand and perceive about these hazards and how these hazards will affect their interactions with, and use of, the coast in the future,” says study author Anna Attard from UNSW Science.

“We think that’s an important aspect of building community resiliency and preparedness to coastal erosion and inundation.”

The My Coast NSW Study took place in 2017 and 2018, surveying more than 1000 people from all over the NSW coast, across three main groups: Coastal Management Professionals (i.e. government, academics, researchers and engineers), General Coastal Users (a cross section of people who use the NSW coast), and Coastal Accommodation Businesses (owners, managers or employees of accommodation businesses situated close to the coast).

The researchers say the resulting report provides an evidence-based information platform to help local governments and coastal management professionals in the future development of effective educational strategies and programs.

“Our ultimate goal is to help improve the ability of NSW coastal communities to adapt sustainably to the risk of coastal erosion and inundation,” Ms Attard says.

Lack of community knowledge about the direct impact of sea level rise is one of the key aspects of the report – which the authors say is concerning, given that sea level rise is a key factor driving coastal erosion and inundation.

“We found that only about 50% of general coastal users think that sea level rise will impact them directly – that’s a worry, given that estimates suggest that by 2100, sea level rise could increase by a metre or more if greenhouse gas emissions continue unchanged,” Ms Attard says.

“Even more worryingly, 25% of coastal accommodation businesses don’t know or are unsure if sea levels are even rising at all.”

The scientists say sea level rise will affect everybody, from those who use the coast day-to-day, to those who may visit a few times a year – and not just people on the front line living near the cost, either.

“It could also affect how you’re able to use your favourite beach, which you may only visit once a year.”

The report also found a clear disconnect between what coastal management professionals think the public should know about coastal hazards, and what the public flagged as wanting to know more about.

“General coastal users told us that would like to know more about how climate change will impact their immediate coast, what the possible solutions are and who the ‘key players’ of coastal management are,” says Ms Attard.

“Community engagement needs to be a two-way process to address that disconnect.”

The My Coast study was funded under the joint State and Commonwealth Natural Disaster Resilience Program. The grant was awarded to UNSW in March 2017 and the study was conducted in partnership with the Sydney Coastal Councils Group (SCCG), Surf Life Saving NSW (SLS NSW) and the NSW Government Office of Environment and Heritage (OEH).

The full My Coast study report, along with multiple fact sheets and a guide for teachers, can be accessed online.

Hospitals are at risk of flooding as climate changes. We need evacuation plans