Opinion African wild dogs have a feeding queue: why it makes sense

Understanding feeding patterns is key to understanding the origin and implications of many aspects of animal social lives. 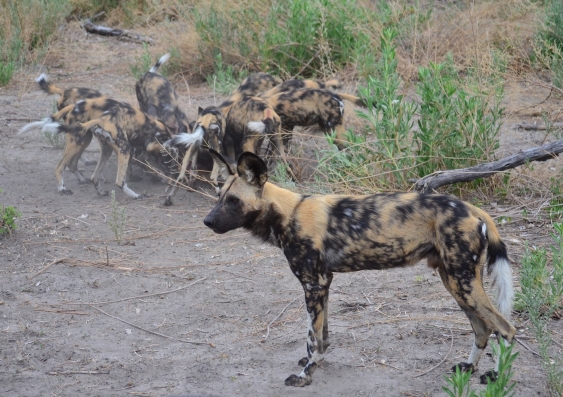 Whether it’s a fancy dinner party or a routine family lunch, meals can be highly social affairs. And patterns of food sharing – or otherwise – can shape or describe relationships.

But this is not unique to humans. From the “finders keepers” approach of Tasmanian devils on small carcasses, to female bonobos trading food for sex, animals acquire and distribute food in various ways, with diverse social consequences. Despite its importance in shaping social systems, food-sharing by animals that hunt in groups is not well understood.

We set out to fill some of this knowledge gap by recording social aspects of feeding behaviour in endangered African wild dogs in Botswana. African wild dog packs revolve around a dominant pair and their offspring that remain in their pack and support their parents in rearing subsequent litters.

Much is known about the costs and benefits of hunting from the pack perspective but individual feeding patterns and their consequences are not well understood. Quantifying these feeding patterns is key to understanding the origin and implications of many aspects of animal social lives, and for African wild dogs the results were intriguing.

First we confirmed the presence and basic structure of the feeding queue confirming that the youngest feed first and are given uncontested access to kills they did not catch themselves. When packs arrive at a kill that one or more of their pack-mates have made, the pups are immediately given access to the spoils, while others fall back.

After the pups have had their fill, next in line are the dominant pair. Access then cascades through the pack in increasing age order, with older dogs having least access to carcasses. 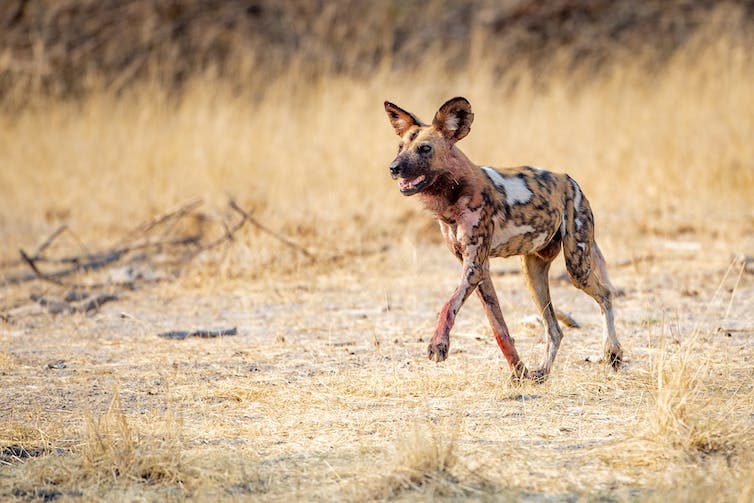 A successful hunter, with blood marks on its legs, leaves the kill to recruit the rest of the pack to join it there. Photo: Bobby Jo Vial

This age-based system of food-sharing is extremely unusual in animal societies. In fact, it has previously only been anecdotally described in African and Asiatic wild dogs.

This made us wonder why an African wild dog’s breakfast look so different, and what are the implications for this endangered pack-living animal?

It is possible that allowing pack-mates uncontested access to food they have not caught themselves may be an extension of other helping behaviour, prioritising those least able to catch food themselves.

While young pups still at the den are fed regurgitated meat, older pups tagging along on hunting trips are allowed to feed directly. In this context, it’s probably much more efficient to allow the pups to feed themselves than to eat and regurgitate for them.

Additionally, this unusual system may also protect African wild dogs from their competitors. Packs are highly cohesive and begin hunting together but it is common for one or a few dogs to become separated during the chase. Successful hunters can thus find themselves away from the rest of the pack on a kill leaving them exposed to their competitors.

The dogs are also said to be on an an energetic knife-edge due to the impacts of losing their kills to spotted hyenas in some areas. They also live alongside lions, which are a major cause of African wild dog mortality.

In this context, pack size is key to defending themselves and their food. We argue that the age-based feeding structure promotes full and fast attendance of the pack at the dinner table.

After a quick feed on high value organs, successful hunters will return to recruit the rest of the pack to the kill-site. This provides safety in numbers, and due to their size and speed advantage, adult recruits can arrive quickly. This increases their chances of getting a meal.

Smaller pups and younger yearlings also benefit by arriving promptly. Priority of access guarantees them food on arrival, and an early arrival increases their share of the spoils.

The speedy arrival of all provides safety in numbers, and structured access means cohorts waiting their turn can watch the surroundings for incoming threats.

This system is a neat solution to competition with lions and hyenas. It also has interesting social consequences for the dogs themselves. In particular, we discovered that it affects which individual dogs invest in hunting.

All pack members may benefit to some extent when prey is captured. But to get to that point some individuals must undertake the risky business of tackling potentially dangerous prey. Which individuals step up? 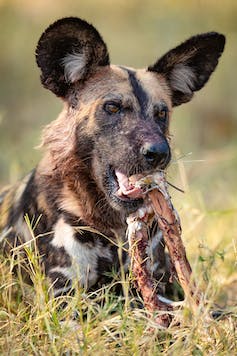 Our study showed that the older subdominants in the pack were more likely to participate in killing prey. Being low in the feeding queue seems to motivate hunting – hunters gaining early access to the choicest bits of meat before the carcass is turned over as soon as the youngsters arrive.

Perceptions of the species

Our findings have wider implications that could help perceptions and therefore conservation of the species.

For a long time the view that wild dogs are bloodthirsty and wanton killers persisted in some quarters. As recently as the late 1970s, African wild dogs were shot as vermin even within some protected areas.

While recent work, including ours, has illuminated African wild dogs in a more positive light, promoting them emotively should be avoided. Whether species persist through means we consider admirable or unsavoury, they should not be judged on this basis. In healthy ecosystems, all species play their role and deserve a seat at the table.