A newly discovered distant relative of the duck has been identified as an ancestor of the biggest bird the world has ever known, by a research team including UNSW scientists. 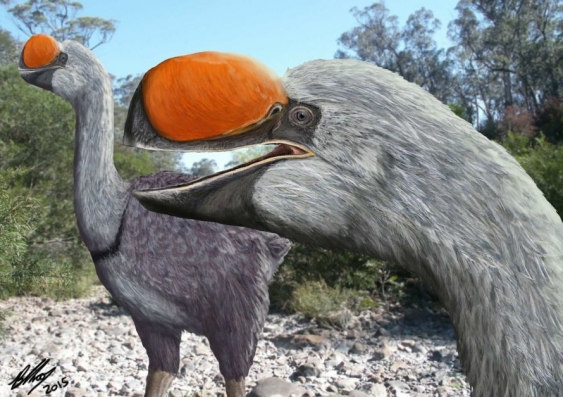 A newly discovered distant relative of the duck has been identified as an ancestor of the biggest bird the world has ever known, by a research team including UNSW scientists.

Weighing in at 250kg, Dromornis murrayi was originally considered the ‘baby’ of the ancient ‘Mihirung’ family of Dromornis giant birds, but the researchers conclude it eventually evolved into the world’s biggest bird, the now extinct Dromornis stirtoni.

“It lived in the late Oligocene – early Miocene, and was the first member of the lineage of Dromornis species,” says study lead author, Dr Trevor Worthy, of Flinders University in South Australia.

“Originally, it was the smallest, at a pretty hefty 250 kg, but by eight million years ago it had evolved into D. stirtoni, which averaged a whopping 450 kg – with some individuals reaching 650 kg – the largest birds the world has known.”

The study, by Dr Worthy’s team of palaeontologists from Finders University and UNSW, is published in the Journal of Vertebrate Paleontology.

“Mihirungs were giant flightless birds only found in Australia and are known only from fossils,” says Dr Worthy. “The largest stood two metres high at its back and reached well over three metres at the head.

“They survived until the Pleistocene period when Genyornis newtoni, the last species, died out, probably about 50,000 years ago.”

Seven species in four genera of the bird are generally recognised, with the last five named in 1979 by Professor Patricia Vickers-Rich of Monash University.

Some 37 years later, the new species, D. murrayi, has been named after Peter Murray, former Northern Territory Museum curator and co-author of the book Magnificent Mihirungs, bringing the total number of known mihirungs to eight.

“This is one monstrous chook that would have had no trouble kicking anyone’s dunny door down,” says Professor Archer.

Professor Hand says: “The very large and distinctive bones of this new ‘Big Bird’ are quite common in the Riversleigh fossil deposits, and are easily spotted by scientists and visitors to the site.'

The authors of the study drew their conclusions after examining skull bones, a sternum or breastbone, and bones from the leg and foot.

“We even had some tiny bones of the wing, which showed this gigantic bird had already, by 26 million years ago, essentially lost its wings,” says Dr Worthy.

To assess further how the various mihirungs differed, the team of palaeontologists also looked in detail at their skulls.

“These birds take the prize for those with the weirdest skull. It is like they had run into a brick wall and compressed everything from front to back, so that the bill joined on half way through the eye,” he says.