As Perseverance prepares to launch for Mars, two UNSW PhD students look back on a field trip that gave Indigenous high school students a behind-the-scenes look at the rover’s upcoming mission. 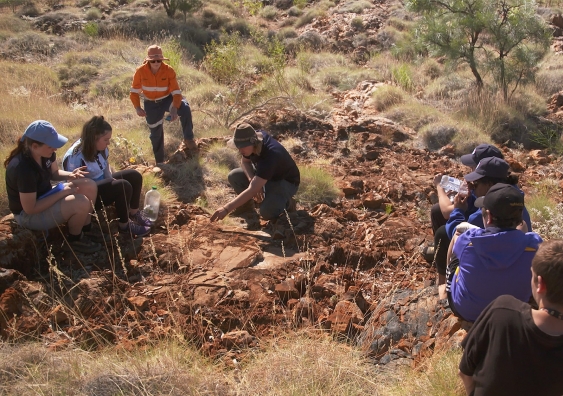 The rocks in Pilbara are three-and-a-half billion years old – roughly the same age as the rocks that might hold signs of life on Mars. Photo: UNSW

“I want to be the first human on Mars!” says high school student Bethany after a day spent searching for fossils in Pilbara, Western Australia.

Bethany was one of 16 Aboriginal and Torres Strait Islander high school students from nearby Port Hedland who went on a camping field trip with scientists from NASA, the European Space Agency (ESA) and UNSW Sydney last year.

The international team – which included key scientists from NASA’s Perseverance mission – were visiting Pilbara for clues on how to search for ancient life on Mars.

“The Pilbara contains one of the oldest fossil sites in the world,” says astrobiologist Ms Bonnie Teece, who is completing her PhD at UNSW Science’s Australian Centre for Astrobiology. She organised the student field trip with fellow PhD candidate, Mr Luke Steller.

“The rocks in Pilbara are three-and-a-half billion years old – roughly the same age as the rocks that might hold signs of life on Mars,” she says. “In many ways, the Pilbara is the closest place on Earth to that period in Mars’s history.”

NASA’s Perseverance is set to launch from Camp Canaveral today. If the conditions aren’t right, it will have a two-hour launch window each day until 15 August. 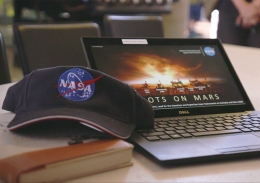 NASA scientists gave the students a behind-the-scenes look at what the Perseverance rover will get up to on Mars. Photo: UNSW

The rover will look for signs of ancient life on Mars while collecting rock and soil samples to hopefully bring back to Earth.

Ms Teece and Mr Steller – who regularly visit Pilbara for their research – saw NASA and ESA’s visit to Western Australia as a special opportunity to engage with the local community.

“We don’t want to be scientists who just look at the fossils and then go back home,” says Ms Teece. “We want to connect with local kids and build a sustained and involved presence in the community.”

The duo organised for the vising NASA scientists to give local students a behind-the-scenes look at some of the tools used on the Perseverance mission, like replicas of the Mars sample tubes and a digital tour of what’s inside the rover.

“The scientists were showing us the insides of the rover and what’s going to happen on Mars,” says Bethany. “It was a really cool experience.”

“The students were really excited to learn that their backyard is essential to scientists from all around the world,” she says.

“It was also special for them to see that their land, and their families’ land, is integral to these space programs.”

Searching for signs of ancient life

Pilbara is home to some of the oldest-known evidence of life on Earth.

The life comes in the form of ‘stromatolites’ – fossilised layers of microbial build-up in rocks – that look like squiggles or wrinkles to the untrained eye.

Mr Steller, who is well-trained in finding fossils, taught the students what to look for. He gave each student a small microscope to attach to their phone to help them investigate.

“At first, many local students were surprised NASA were so interested in their backyards,” says Mr Steller. “One described it as a ‘bunch of hot rocks’.

“Once they knew they were looking at some of the oldest evidence of life on Earth, it didn’t take long for the excitement to spread.”

Searching for fossils was a highlight for student Dakota.

“The fossils were my favourite,” she says. “They were really old – older than dinosaurs. We found out how they formed and how they were named.

“It was cool to see what was here millions of years ago.”

Like the students, NASA and ESA scientists were familiarising themselves with the rocks and fossils in Pilbara – which are the same kind of rocks they will look for on Mars. Their specialist training was led by UNSW Science Professor Martin Van Kranendonk, Director of the Australian Centre for Astrobiology.

“When Perseverance reaches the red planet, it will look for rocks are a bit older than three-and-a-half billion years old – a similar age as the rocks in Pilbara,” says Ms Teece.

“Rocks that age will be the most likely candidates for life on Mars.” 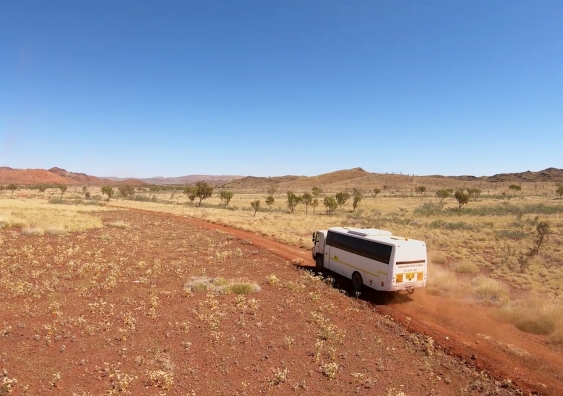 NASA and ESA scientists visited Pilbara to study its ancient rocks and fossils – which are roughly the same age as the rocks that might hold signs of life on Mars. Photo: UNSW

Stepping back in time

The field trip wasn’t all about fossils, but also looking at the bigger picture of Earth’s 4.6 billion-year-old history.

To help the students visualise this amount of time, Ms Teece stretched a 46-metre-long piece of colour-coded fabric over the dirt. Each colour represented a new geological era in Earth’s history.

Students were given soft toys, like dinosaurs, animals, humans and sponges, and asked to place them where they thought the organisms evolved.

“They were mind-boggled to see that humans evolved right at the very end of the timescale,” says Ms Teece.

“It really changed their perspective – especially when they considered how much impact humans have had on the Earth.”

One of the students, Lilly, was surprised to see how the planet changed over time.

“The rocks and the mountains are kind of like our grandparents,” she says. 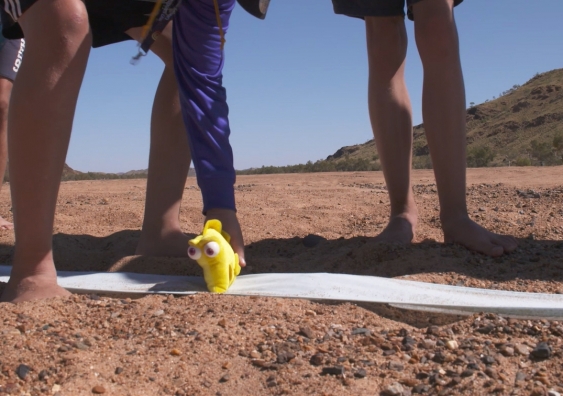 Lessons by the campfire

Fieldwork aside, Mr Steller and Ms Teece were eager to show students just how fun life as a scientist can be. 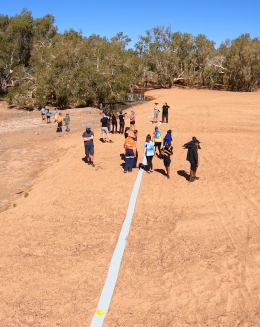 “Being an astrobiologist isn’t just about looking at rocks, but the whole experience of science,” says Mr Steller. “Sometimes this includes camping around the fire, sleeping in swags and meeting amazing land caretakers.

“We wanted to show the students that side of science, too.”

The group camped at a sandy billabong close to the fossil site. Like most camping trips, there were hiccups during the day – like getting bogged – followed by a night of stargazing and late-night chats by the campfire.

“The kids asked really insightful questions, like how big the universe is and what else is out there,” says Mr Steller.

“It was good for the students to see that science doesn’t have all the answers, but we could try to understand those big, unknowable questions together.”

An astronomer from the Australian Indigenous Astronomy (AIA) network visited the group to discuss the rich history of Indigenous astronomy. Under the night sky, the students learnt how elders read the stars and how to spot certain constellations.

They also delved deeper into questions about the universe.

“Learning is an ongoing thing – it doesn't get switched off after a 45-minute workshop,” says Mr Steller.

“It can emerge in the conversations that happen around the campfire, while looking up at the stars, or while making aliens out of clay.” 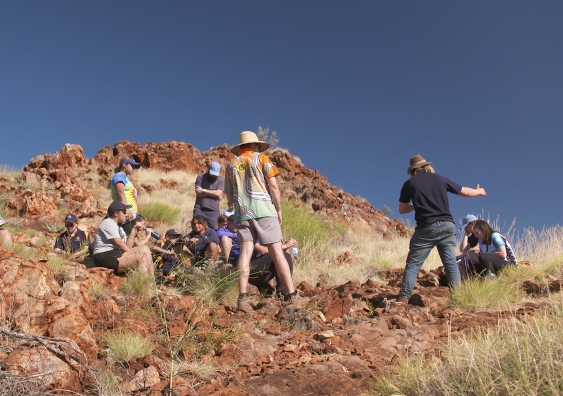 Once Mr Luke Steller taught the basics of looking for fossils, student had a chance to get hands-on fossil hunting experience. Photo: UNSW

The students’ response to the field trip motivated Ms Teece and Mr Steller to bring similar experiences to a broader audience.

The researchers are partnering up again to deliver a series of free online science workshops as part of National Science Week (15-23 August 2020).

“Our next project, Praxical, is based on the philosophy that the best way to learn science is to do science,” says Ms Teece. 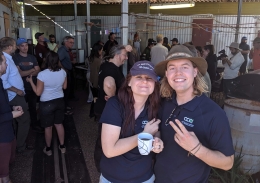 “In our National Science Week workshops, participants will get hands-on experience and learn the same way scientists do.”

The workshops, in partnership with ANSTO and the Department of Planning, Industry and Environment, will explore questions like ‘What do scientists look for when trying to find other planets suitable for life?’, ‘What can air pollution data tell us about the world around us?’, and ‘How do ecologists decide what bushland to protect?’

There will also be a version of the workshop aimed specifically at teachers.

“Out in the Pilbara we saw the real educational value of students studying fossils firsthand,” says Mr Steller.

“Actually doing science yourself – rather than just reading about it – can make such a difference.”