The grounding of a giant iceberg in Antarctica has provided a unique real-life experiment that has revealed the vulnerability of marine ecosystems to sudden changes in sea-ice cover. 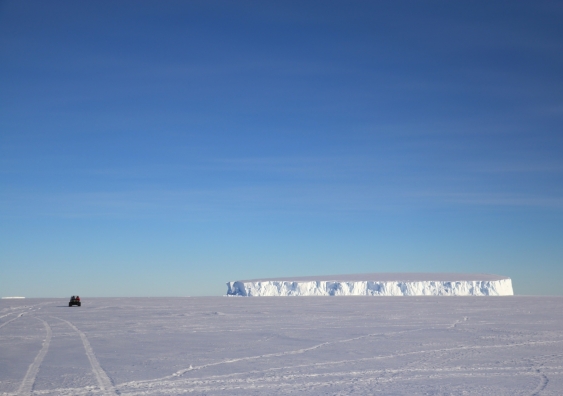 UNSW scientists travel out onto the sea-ice covering Commonwealth Bay in East Antarctica.

The grounding of a giant iceberg in Antarctica has provided a unique real-life experiment that has revealed the vulnerability of marine ecosystems to sudden changes in sea-ice cover.

UNSW scientists have found that within just three years of the iceberg becoming stuck in Commonwealth Bay – an event which dramatically increased sea-ice cover in the bay – almost all of the seaweed on the sea floor had decomposed, or become discoloured or bleached due to lack of light.

“Understanding the ecological effect of changes in sea-ice is vital for understanding the future impacts of climate change, but it is impossible to manipulate sea-ice at the scale we need to conduct experiments,” says the study’s lead author, UNSW’s Dr Graeme Clark.

“Luckily, the grounding of an iceberg in Commonwealth Bay in 2010 provided us with a perfect natural experiment to carry out research on this important issue.

“Historically, the winds coming down from the Antarctic ice cap have kept the bay free of sea-ice for most of the year. But since the massive iceberg got stuck, the bay has been covered in sea-ice several metres thick, all year round,” he says.

The study is published in the journal Polar Biology.

The scientists travelled to Commonwealth Bay in the east of the continent in December 2013, as part of the UNSW-led Australasian Antarctic Expedition 2013-2014, which retraced the route of Sir Douglas Mawson’s scientific expedition a century before.

Dr Clark and team member, Dr Ezequiel Marzinelli, drilled through the sea ice in the bay and used underwater cameras to survey the seabed.

The UNSW team, led by Professor Emma Johnston, also examined the historical records made by Sir Douglas Mawson, who established his research station in Commonwealth Bay. Mawson’s expedition used dredge hauls to survey the bay, which was then rarely covered in ice, in five locations during a two-year period from 1912 to 1913.

The UNSW researchers also compared their survey results with footage taken in the area in 2008 by underwater photographer Erwan Amice.

“After three years of sea-ice cover, the forests of healthy seaweeds that previously dominated the seabed were in a severe state of decline,” says Professor Johnston, of the UNSW School of Biological, Earth and Environmental Sciences.

“About three quarters were decomposing, while the remainder were discoloured or bleached. However, darkness-adapted vertebrates such as brittle stars and fan worms were starting to colonise the bay.”

Dr Marzinelli says: “This is the first time a shift from an algae-dominated ecosystem to an invertebrate-dominated one has been observed with a known start date. Continued sampling at the site would allow the rate at which this transition is occurring to be worked out.”

Sea-ice not only affects how much light reaches the animals and plants living on the seabed, it regulates the amount of disturbance from drifting icebergs that scour the bottom, and determines the amount of detritus and vegetation that settles there.

UNSW’s Dr Ezequiel Marzinelli and Dr Graeme Clark drill a hole in the sea-ice in Commonwealth Bay in East Antarctica.

An underwater camera is lowered through a hole in the sea ice to the sea floor in Commonwealth Bay in East Antarctica by UNSW scientists. The images reveal disintegrating seaweed and bleached pink coralline algae, plus some small sea stars and brittle stars.