A mapmaking app created by UNSW scientists harnesses the power of Google and NASA to empower ecologists to create a view on ecosystems without any specialist equipment. 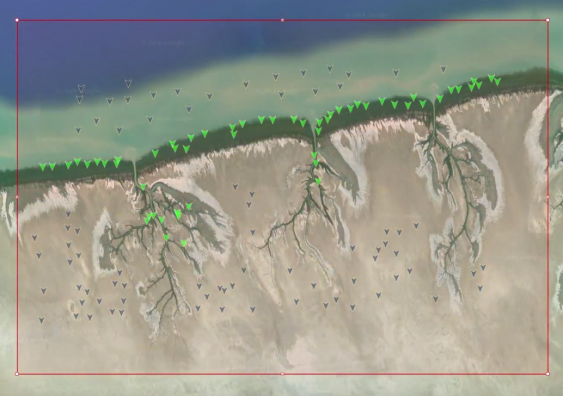 UNSW scientists have created a mapmaking app that can fast-track large-scale ecosystem analysis from months to minutes, giving conservationists a way to monitor decades of human impact, hotspots of biodiversity and vulnerable ecosystems.

Less than a year after its launch, REMAP – a free online mapmaking tool that allows users to detect environmental change over time using satellite images – has been used in 140 countries and is now applied in a range of contexts. The app is now an integral part of an international effort to map Myanmar’s ecosystems.

Dr Nicholas Murray from UNSW's School of Biological Earth and Environmental Sciences created the app because he saw the potential of harnessing remote sensing data to support land conservation and mapping ecosystem loss. Remote sensing refers to techniques for observing earth from space or air to obtain information about it.

“We wanted to empower people to map just how much the ecosystems around them have been changing,” says Dr Murray.

“The fundamental motivation that led to the app was to allow people to create maps of their environment to identify what ecosystem types occur there, and how they’ve changed over the last 15 to 20 years.”

The UNSW scientists built the program to allow quick analyses of Landsat satellite data gathered by NASA and the US Geological Survey. Landsat is a series of satellites imaging the whole Earth every two weeks since the 1970s - it is one of the longest continuous space-based record of global change. The database of images is free, and when pieced together forms an intricately detailed image mosaic of the Earth.

Dr Murray explains that just half a decade ago, building a map from raw satellite data from scratch required extensive work.

“In the past it has been a technical process to produce high-quality maps suitable for tracking environmental change such as deforestation and ecosystem loss. It really has been sitting in the hands of experts,” says Dr Murray.

“We aimed to remove the technical steps required to monitor ecosystems from space. Now, if I want to map an area the size of Sydney using satellite data that would require a fraction of the time in REMAP."

REMAP was designed to be user-friendly, making it accessible for everyone at the frontline of environment conservation, from national park rangers and ecologists to citizen scientists. The program gives users a high level of control and ability to map an ecosystem type, analyse specific areas and even the timeframe of their choosing.

The app uses machine learning to develop a map: users train REMAP to classify specific ecosystems types by identifying a few pixels from Google Earth, or by uploading their own field data. From that little bit of data, REMAP can apply that information to recognise ecosystems in a selected area and then returns results that let users know the final extent of the ecosystem and how much it has changed over time. It is possible to tailor the program to detect ecosystem changes, such as witnessing the boundaries of forests shrink over the decades due to deforestation.

Generous access to the Google Earth Engine gave the team access to sufficient computing power to process the high volume of Landsat images and run the machine learning analyses that are the foundation of REMAP.

The team has also joined forces with the Wildlife Conservation Society to map Myanmar’s ecosystems. According to the IUCN, Myanmar is a strategic country in terms of biodiversity conservation but does not have a lot of data to identify critically endangered ecosystems.

The country is home to 10% of the world's freshwater turtles and tortoises on just over 1% of the world's land area, and at least 250 mammal species and more than 1,000 bird species. Its forests are some of the most extensive and intact in Southeast Asia.

“We are pleased to be collaborating with Dr Murray and his team and using REMAP in our efforts protecting and educating the public about Myanmar’s ecosystems,” says Dr Hedley Grantham from the Wildlife Conservation Society.

“Myanmar is host to a rich biodiversity unique to south-east Asia but there is currently little data to guide conservation efforts. The REMAP app will be an important tool to provide a comprehensive assessment of vulnerable ecosystems to help the Wildlife Conservation Society’s mission in biodiversity monitoring and protection.”

Dr Murray and his team developed REMAP at UNSW with conservation biologist Professor David Keith and Professor Richard Lucas, a remote sensing scientist.  Recently, the team published their first scientific paper about the app in Methods in Ecology and Evolution. Since REMAP was publicly released in December 2017, over 6500 people from more than 140 countries have used the program.

“We are at an exciting time on earth where we really have the computing power to do this. This application makes the world’s best practice remote sensing method accessible to everyone,” says Dr Murray.

“People all around the world are going to be able to make really high-quality maps with the right data and identify places that are changing – for the worse or for the better.”