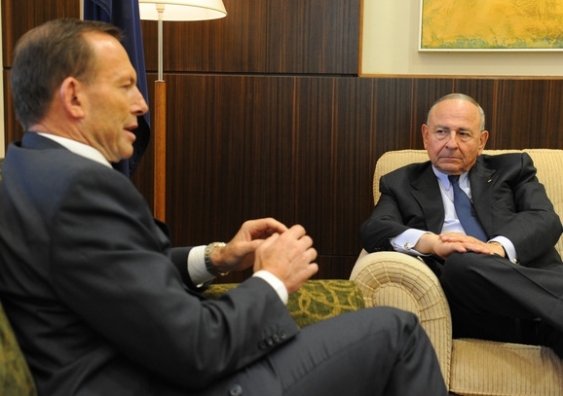 OPINION: As the Prime Minister Tony Abbott’s top business adviser, Mr Newman is a person of influence in Australia so his public statements should be held up to scrutiny.

In a recent newspaper column, Mr Newman said discrepancies between climate model forecasts and recorded temperatures begged the question: “Why then, with such little evidence, does the UN insist the world spend hundreds of billions of dollars a year on futile climate change policies?”

All scientists would agree with Mr Newman that critical analysis of mathematical modelling is a crucial part of science. But it is a logical fallacy to leap from that valuable topic to describing climate change policies as futile.

Climate models: what they can and can’t do

There is a saying in science that “all models are wrong, but some models are useful”. In simulating any complex system, any model will fail to reproduce all facets of the system perfectly.

Mathematical models may be imperfect but they are extremely helpful to predict the weather, design aeroplanes and even test new vaccines. They are essential to modern life. A major part of scientific research is not only developing models, but determining how they are best employed.

When asked for a data source to substantiate his 95% claim, Mr Newman referred The Conversation to research by a range of scientists including Professor Judith Curry from the Georgia Institute of Technology and Professor John Christy from the University of Alabama in Huntsville. Mr Newman said these researchers had identified errors in climate modelling.

… the climate models that governments base policy decisions on have failed miserably. I’ve updated our comparison of 90 climate models versus observations for global average surface temperatures through 2013, and we still see that >95% of the models have over-forecast the warming trend since 1979, whether we use their own surface temperature dataset (HadCRUT4), or our satellite dataset of lower tropospheric temperatures (UAH)."

It’s true that over the last two decades modelled surface temperatures have generally risen faster than temperatures recorded in real life. But there are good reasons for that and it doesn’t mean we should take the prospect of climate change any less seriously.

These papers show that the recent discrepancy between projections and recorded temperatures is very likely due to random fluctuations in the climate system. The “problem” is clearly seen in this graph showing that modelled surface temperatures have generally tracked above observed temperatures over recent years.

Change in surface temperature (relative to 1900-1920) based on 42 climate models and two observational datasets. Data can be freely downloaded or analysed at http://climexp.knmi.nl/ Alex Sen Gupta, Author provided

To understand what’s happening, it is critical to realise that the climate changes for a number of reasons in addition to CO₂. These include solar variations, volcanic eruptions and human aerosol emissions.

The influence of all these “climate drivers” are included in modern climate models. On top of this, our climate also changes as a result of natural and largely random fluctuations – like the El Nino Southern Oscillation, ENSO and the Interdecadal Pacific Oscillation, [IPO] – that can redistribute heat to the deep ocean (thereby masking surface warming).

Such fluctuations are unpredictable beyond a few months (or possibly years), being triggered by atmospheric and oceanic weather systems. So while models do generate fluctuations like ENSO and IPO, in centennial scale simulations they don’t (and wouldn’t be expected to) occur at the same time as they do in observations.

Indeed, if some advanced civilisation were to make an exact copy of Earth, the copy would also fail to reproduce the fluctuation associated with the recent slowdown in temperatures. This is not a modelling failure, this is just a fact of life in dealing with complex systems.

So, yes, as the figure shows there are multiple decadal periods in the past where the models either overestimate or underestimate the observed warming. Despite this, its clear that the overall modelled surface warming over the course of more than a century is only off by a very small margin.

These metrics are far less sensitive to random fluctuations as they don’t suffer from the complications of heat redistribution. Moreover, over 90% of the additional heat from anthropogenic warming goes into the ocean, with only a small fraction going to raising surface temperatures.

Based on these more representative metrics, there is no “pause” in either the observations or in the climate models. Indeed, both indicate increasing rates of changeover time.

We have known of the link between CO₂ and warming since the experiments of John Tyndall in the mid 19th century. It’s certainly not a revelation from climate models.

Indeed, by the end of that century, Swedish Nobel Prize laureate Svante Arrhenius had already predicted that large CO₂ emissions would cause substantial global warming.

Modern climate models add considerable value to the well-tested empirical relationships. They resolve the land, ocean and atmosphere and explicitly include the impact of all known drivers of climate change without simply assuming that all change is due to CO₂ (as Mr Newman’s statement would imply).

Critically, this means that we can use the unique fingerprints of each driver to disentangle and attribute the changes in historical temperature to these complex mix of drivers. The planet has clearly warmed over the last 100 years, and climate models demonstrate that natural drivers like the sun are unable to explain this warming. Conversely, the warming is consistent in both magnitude and spatial pattern with our emissions of greenhouse gases.

Climate models have been thoroughly and critically tested against observations and are able to simulate with fair accuracy the component of climate change caused by human emissions of greenhouse gases and aerosols as well as natural factors like solar variations and volcanic eruptions.

However, long-term climate simulations do not and likely never will reproduce the timing of shorter-term random fluctuations, like the recent slowdown in surface temperatures. In the long run, this fluctuation, like many before, will just be noise on a gradually increasing temperature signal.

That the discrepancy is a “well-kept secret” is demonstrably false given the large number ofscientific papers discussing and trying to explain exactly this issue.

Alex Sen Gupta is a Senior Lecturer, School of Biological, Earth and Environmental Sciences at UNSW.

John Cook is a Climate Communication Research Fellow at The University of Queensland.