Is climate change to blame for the recent record temperatures? Maybe, but it’s not a simple case of cause and effect, writes Sarah Perkins-Kirkpatrick. 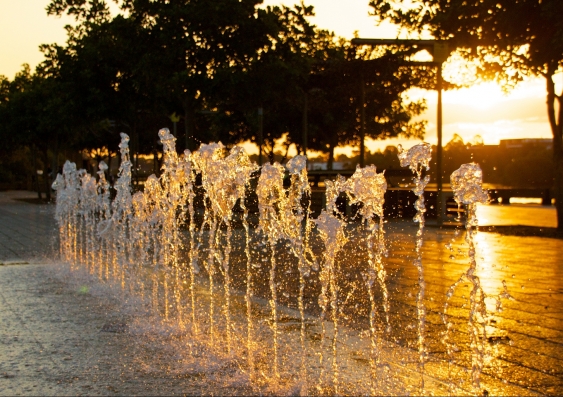 OPINION: Last Friday was the second-hottest day ever recorded in November at Sydney’s Observatory Hill, and the hottest temperature ever recorded this early in the season in the harbour city. In fact, only a handful of Sydney November days have ever cracked the 40°C mark. Friday was the last in a series that made up a short, sharp spring heatwave.

When extreme events like this occur I often get asked whether climate change is to blame for these extremes. It’s not a question we climate scientists can answer with a simple “yes” or “no,” and people often seem a little upset when I say that it’s the wrong question to ask or, if I’m feeling a little facetious, when I say, “Maybe.”

In fact, an entire research field is dedicated to working out whether we can quantify the role of human activity in extreme events. This field, known as detection and attribution, has been growing rapidly over the past decade. But the questions it seeks to answer are a bit different from the one I get asked when it’s very hot, and they don’t often have binary answers.

The questions that scientists ask are about how human activity has altered –rather than created – particular types of extreme events. They may be questions about how climate change has contributed to observed trends, which are answered using “optimal fingerprinting” (I’ll return to this in a future column). But what I want to focus on here is the process that helps us answer the question that arises when a heatwave, drought or intense rainfallevent has occurred. To do this we undertake a “fraction of attributable risk” analysis.

This is not as complex as it sounds. It simply involves comparing the frequency of a particular event using two distinct and unrelated samples. A classic and well-used analogy is the link between smoking and lung cancer. In order to work out whether smoking increases the risk of lung cancer, the incidences of the disease among smokers and non-smokers are compared. The corresponding answer, or fraction, tells us whether the risk is altered between the two groups, and therefore whether an increased risk can beattributed to a particular cause.

In climate science, our two distinct groups are produced by physical models. We have one bunch of experiments that represent the climate had the industrial revolution never occurred, meaning that atmospheric carbon dioxide concentrations are kept at 280 parts per million. We have another bunch that represent the climate we actually live in, where atmospheric carbon dioxide levels increase through time due to human activity, which are known from observational measurements. All we need to do is compare how often our event of interest occurs in each group of experiments. Any fractionabove 0 means an increased risk of that event, which is attributed to human influence on the climate, namely rising carbon dioxide levels. A fraction of 0.5, for example, equates to the event occurring twice as often as it did before we started driving climate change.

It is important to make the distinction between changes in the risk of an event and whether climate change is its entire cause. Again, this is where the smoking analogy is useful. While lung cancer is not solely caused by smoking, we can now confidently say that your risk of suffering the disease considerably increases if you smoke. While extreme temperatures still occurred before the industrial revolution, the possibility of their occurrence continues to increase alongside our greenhouse gas emissions. A heatwave like the one over much of Australia last week could have occurred without any human influence, but it now occurs more often because of human influence.

Among the many studies that have used this methodology, those that have investigated hot temperature events have almost alwaysfound an increased risk due to anthropogenic influence. Take, for example, Australia’s hottest summer on record in 2012–13: we now know that summers of this intensity occur six times more often than they did before the industrial revolution. The kind of heatwave we experienced in May last year has increased twenty-fold due to human influence, and Australia is now six times more likely to experience a month as warm as the hottest month on record (most recently in October).

A pertinent example of this is the 2003 European heatwave. In one of the first attribution studies ever conducted, it was found that the risk of such a heatwave had at least doubled due to anthropogenic climate change. Yet a more recent study has shown that, with the rise in atmospheric carbon dioxide levels, such an event is now twenty times more likely. The risk will only continue to grow in the coming decades.

While “fraction of attributable risk” is a simple and effective calculation, it needs to be implemented every time a new event occurs. Each analysis is dependent on the magnitude of the event, how long it lasted for, and the size of the area it covered. And this is a reminder that a change in the risk of one event can’t be transferred directly to another.

Even though they seem similar on the surface, two events may have a different combination of magnitude, duration and extent, which affects the derived change in frequency due to anthropogenic climate change. That’s why the question is not whether climate change is the cause of an extreme event, but whether we are seeing more of these events because of climate change.