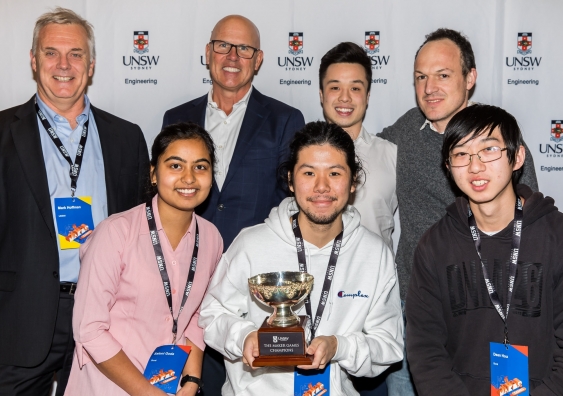 An augmented reality system designed to eliminate the chances of workers being electrocuted by industrial machinery is this year’s winner of the UNSW Sydney’s Maker Games.

Now in its third year, the Maker Games encourages UNSW students from multiple faculties to come together and design prototypes that solve real-world problems as set by industry partners.

This year’s winner, Team safAR, impressed the judges after responding to a challenge from construction materials manufacturer Boral to come up with a way to prevent its workers from being accidentally electrocuted after incorrectly isolating – or turning off – heavy machinery in its manufacturing plants.

The cost of making a simple mistake while trying to isolate a machine can be fatal, with an average of 27 workers dying each year from electrocution, while more than 530 people are hospitalised with electrical injuries, Team safAR said in its pitch to the judges.

The Team safAR students – Saloni Goda, Derek Sun, Dean Hou, Charles Chan and Neel Iyer – responded to the problem by creating a system that uses augmented reality (AR) to provide step-by-step instructions to workers about how to safely isolate machinery.

A worker wearing a virtual reality (VR) headset loaded with the safAR software simply needs to look at the machine in question to be offered AR video prompts that direct him or her to safely shut it down.

“So it's a really easy-to-use tool that any construction worker can look at the machinery and instantly get feedback on what they should do in the field. It uses some small safety glasses, which are essentially similar to [Microsoft’s] HoloLens, that give you a VR/AR kind of display. So that while you're in the field, you can operate our software hands free.”

Up until now, workers in industrial plants like Boral have had to rely on long and complicated manuals to follow the correct procedure, with risks of harm increasing when people specialising in this knowledge are away from the workplace.

“When we went to Boral’s Maldon concrete factory, we realised that over the next 10 years, there's going to be a generational shift, especially in the training and how they're going to be doing electrical isolation,” team member Charles Chan (civil engineering) said. “So this is the best opportunity to cut in and teach the new people the strict method and giving them step-by-step instructions.”

Boral’s chief people transformation officer Wayne Reade played mentor to Team safAR and said in addition to being very proud of his young charges, he was impressed with the fresh approach they brought to solving the problem.

“Having people that weren't fixed, but were very open minded around how to solve problems really differently… and having them go out to site and listen and engage with people at the front line, and understanding what are their pain points was a really, really important step for Boral,” Mr Reade said.

Dean of Engineering Professor Mark Hoffman said the Maker Games was a great opportunity for students to apply their learnings to the real world and a key component of UNSW’s strategy to provide ‘quality at scale’ engineering education.

“One of the reasons the Maker Games is such a wonderful learning experience is it gets the students and industry partners together and we get some really interesting problems solved by people who aren't constrained by pre-existing ideas,” he said. “And we have students learning by doing real-world projects, not ones we've created on campus.”

As part of their prize, the winning students will be soon jetting off to Shanghai and Beijing in China to “look at their top universities and see how they’re innovating and learning about their entrepreneurs,” said data science student Dean Hou.

Other prototypes presented by the Maker Games finalists were:

UNSW Faculty of Engineering project officer Kevin Duquette said the third Maker Games has now cemented itself as an important event for both UNSW and its industry partners.

“An amazing culture is already developing within this program,” he said. “UNSW alumni are coming back as industry mentors or guest speakers, and students who have participated in previous years are signing employment contracts with various Maker Games industry partners.”