Australia's hoping to take a share of the billion-dollar space industry with the launch of its first totally Australian-built satellites in 15 years, writes Andrew Dempster. 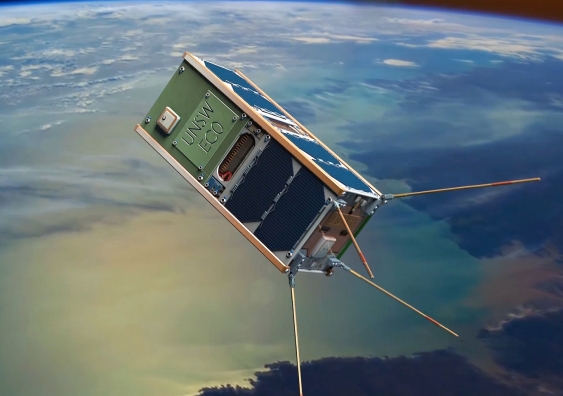 Artist’s impression of the UNSW-EC0 cubesat in orbit above Earth. (Credit: Jamie Tufrey/UNSW)

OPINION: The first Australian-built satellites to be launched in 15 years are set to take off this week from Cape Canaveral in Florida.

Unlike the enormous satellites Australia uses for telecommunications, each of these new satellites is the size of a loaf of bread. But although small, they may provide a key step in enabling Australia’s entry into the global satellite market.

Three types of cubesats are the Australian contribution to the international QB50 mission, in which 36 satellites from different institutions around the world will carry instruments provided by the Von Karman Institute (VKI) to examine the lower thermosphere. This is a very interesting part of the atmosphere for several reasons, such as the way it disturbs GPS measurements.

The cubesats will be first delivered to the International Space Station, and then released into their orbits.

One of Australia’s entries in the cubesat race to space.

Once the VKI instrument and support systems (power, communications, and so on) are installed, there is still room for the teams to install payloads of their own. 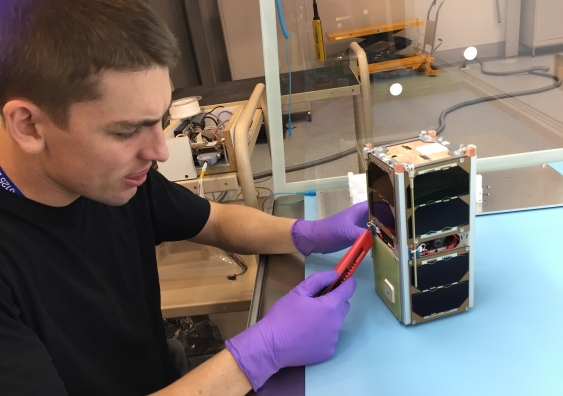 The UNSW cubesat, known as UNSW-EC0, is running four experiments including a GPS receiver, and two boards testing radiation-robust software and self-healing electronics. The fourth experiment is to test the satellite’s chassis, built using a 3D-printed material never before flown in space.

The launch is significant, not just because it is so long since Australia built satellites, but because it could be the start of something much bigger.

This is an innovation sector Australia cannot ignore, and small satellites – especially nano-satellites or cubesats – offer Australia a way in.

According to a report last month by Allied Market Research, the small satellite market is expected to be worth US$7 billion (AU$9.2 billion) by 2020, with a compound annual growth rate of about 20%.

Analyst Spaceworks said in February that by 2023, the requirement for launches in the 1kg to 50kg class will be 320 to 460 satellites per year, more than 70% of them for commercial purposes.

Another analyst Euroconsult last year said there would be more than 3,500 small satellite launches in the next decade, worth US$22 billion (AU$29 billion) with launch earnings of US$5.3 billion (AU$7 billion). That’s a 76% increase over the previous decade.

This disruption has the potential to be more important for Australia than for any other developed nation.

Australia is the largest economy in the world not to have a space agency, which I have highlighted before, and suggested ways forward. As a result, Australia has not developed a traditional space industry.

Exploiting cubesats offers an opportunity for Australia to participate in this industry, despite the absence of an agency.

In the same way that the success of Rocket Lab forced New Zealand to establish a space agency, Australia’s success with cubesats could finally see the establishment of an agency here.

A gathering of space minds

The launch of the QB50 cubesats has been delayed several times and is currently slated for 1am (AEST) on Wednesday April 19.

So by sheer coincidence it will coincide with a gathering in Sydney of the Australian cubesat community – CUBESAT 2017: Launching Cubesats for and from Australia – that will showcase some of the remarkable progress Australia has made in recent years.

This includes three cubesat missions that have constructed satellites – QB50 mentioned above, and a further two from the Defence Science and Technology Group: Biarri (two launches of one cubesat and three cubesats) and Buccaneer (one cubesat).

A large number of Australian start-ups are looking to operate in the global small satellite market.

Ambitiously, there are also companies looking to develop cubesat constellations, which are large numbers of satellites with orbits optimised for global coverage for a range of different applications. The Australian leader at present is Fleet from Adelaide.

CUBESAT 2017 is the second workshop of its kind. When the first was run, two years ago, there was no way then to anticipate the huge leaps Australia has made in this niche area of space.

Recently, the Space Industry Association of Australia released a white paper calling for a space agency.

There was some encouragement for the community in the response from the federal Science Minister, Senator Arthur Sinodinos, to that call when he said:

I’m quite excited at the idea of us doing more in space.

So there is hope we may see some developments.

In terms of cubesats, it is with great excitement we look forward to where we’ll be in the next two years, when perhaps we can say, with Australian-made assets in space, that the Australian space industry has finally been established.

Andrew Dempster is Director of the Australian Centre for Space Engineering Research, and a Professor in the UNSW School of Electrical Engineering and Telecommunications.

Lets talk about the space industry in Australia's election campaign