A lot more work needs to be done if we are to satisfactorily reduce the greenhouse gas footprint of coal mining, write Bryce Kelly and Charlotte Iverach. 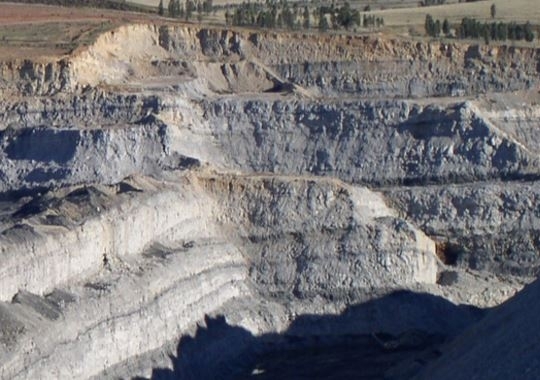 An open-cut coal mine in the Hunter Valley. Bryce Kelly, Author provided

OPINION: Methane emissions are one of the major concerns surrounding coal seam gas. But we should also be paying attention to other sources of methane, in particular those from coal mining. By dealing with these we could make significant progress on reducing Australia’s greenhouse gas emissions.

Some coal mines have operational power plants and pilot studies to use the vented methane and reduce emissions. But recent mapping of the concentration of methane in the atmosphere at ground level by UNSW Australia in association with Royal Holloway University of London Greenhouse Gas Laboratory shows that we need to do much better.

Methane is a colourless and odourless gas, but, like carbon dioxide, it contributes to global warming. In fact it is more potent: methane released into the atmosphere has a global warming potential 25 times greater than carbon dioxide over 100 years.

Methane is a natural part of our world, but human activities over the past two centuries have increased its concentration in the atmosphere from a base global average of 722 ppb in 1750 to a global average of 1,823 ppb in 2015.

To better understand why methane is increasing in the atmosphere, over the past three years we have been undertaking extensive measurements of greenhouse gases in the ground-level atmosphere throughout New South Wales and Queensland. The focus of our research has been mapping methane in all landscape settings to determine significant sources.

Surveying on the move

We have travelled many thousands of kilometres to measure greenhouse gas emissions in urban, rural and mining landscapes using a portable greenhouse gas analyser. The methane analyser is simply placed inside a car, and air is drawn into the analyser via a tube which has an inlet mounted on the roof. We then measure the concentration of methane in the atmosphere as we drive along roads.

Ground-level concentration of methane in the atmosphere throughout the Hunter Valley. Spikes extending beyond the 3.0 ppm concentration line are associated with underground mine venting. Bryce Kelly, Author provided

From the figure above you can see that Hunter Valley coal mines are a major source of methane released into the atmosphere. Most of the methane above background concentrations in the atmosphere is due to venting of methane from underground coal mines to make them a safe place to work - if the mines weren’t vented, the methane could ignite and explode.

While some mines capture vented methane to generate power or flare the methane, this image shows that a lot more work needs to be done if we are to satisfactorily reduce the greenhouse gas footprint of coal mining, even before the coal is used to produce electricity.

On some days methane concentration above 2,000 ppb extends for 50 kilometres near the coal mines. We have not encountered any other landscape with elevated readings extending for kilometres, with the exception of days when there are bushfires.

Current approximations of methane being emitted to the atmosphere are a combination of measurements and estimates. This has resulted in considerable uncertainty in the values reported to government and tallied in Australia’s greenhouse gas accounts.

Australia needs a more extensive greenhouse gas monitoring network, so that we can reduce the uncertainty in our National Greenhouse Accounts and better track progress on our international emission reduction commitments.

Our research is focused on measuring what is actually being released into the atmosphere. This is vital for properly understanding how large our greenhouse gas emissions are, and where to focus our efforts to reduce these. Clearly, further reducing emissions from coal mining is a good place to start.

This article was co-authored by Elisa Ginty, an honours candidate at UNSW.

River on fire: even if it’s not coal seam gas we should still be concerned