Australia has smashed its way to victory in the RoboCup world soccer championship for the second year in a row, with UNSW's student team beating the Germans 3-1 in a tense grand final. 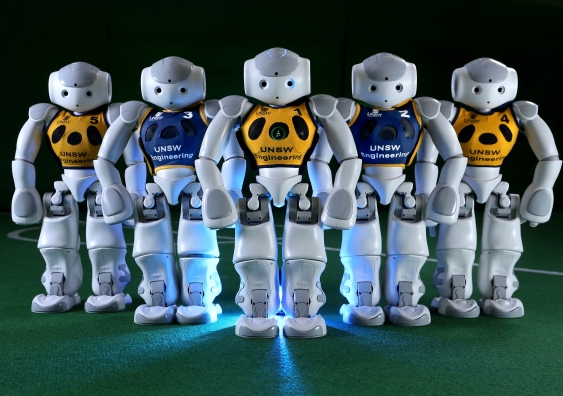 Australia has smashed its way to victory in the RoboCup world soccer championship for the second year in a row, with the University of New South Wales (UNSW) student team beating the elite German squad by 3-1 in a tense grand final.

The five UNSW robots beat ‘B-Human’ – a five-robot squad deployed by the elite University of Bremen and DFKI (German Research Centre for Artificial Intelligence) – at the RoboCup World Championship in Hefei, west of Shanghai in China, at 1:30pm AEST (Sydney time).

UNSW had possession of the ball for most of the first half, but the Germans mounted a tight defence, with four robots repeatedly blocking the goal. But after 8 minutes, the UNSW robots broke through and scored. In the second half, the referee called a penalty for the Germans, leading to first goal against the Australians.

After several rounds of tense to-and-fro, the UNSW team broke through again and scored their second goal. Then, in a nail-biting finish – and with five seconds to go – the UNSW robots lobbed the ball into the net and took the title 3-1. 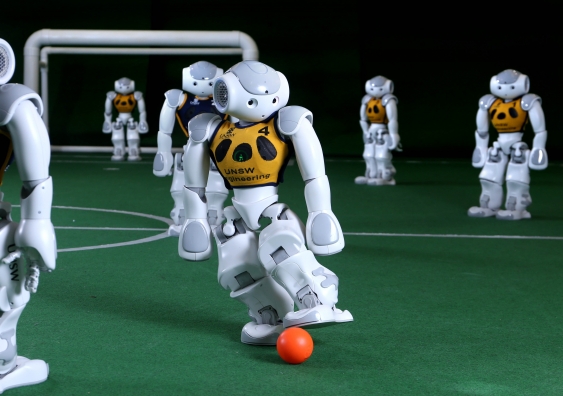 “We were really nervous at 1-1, because there was 2.5 minutes to go,” says team leader Sean Harris, a PhD student with UNSW’s School of Computer Science and Engineering, speaking from Hefei. “We went totally ecstatic scoring that second goal.”

Because there is no external control – by humans or computers – the teams have to rely on the programming and self-governing software algorithms they developed over the past year to win the game.

Harris, who was also team leader in 2014, put the win down to a superior walking code developed by hours of simulations and the application of machine learning: “The robots learned it themselves. We made a robot run around in a simulator for hours and hours, and we looked at how it could best balance. So our walk code is very good, and we were quicker and we were at the ball faster.”

While the two teams of Nao humanoid robots battle it out, student programmers watch the event live, constantly refereeing to their laptops. “We can listen what they’re saying to each other, and we can see what they think is going on. Obviously there’s nothing we can do anything to change their behaviour, but at least we can explain why they are doing what they are. If it does something stupid, we can learn from it.”

For the three UNSW students and two alumni in China for the world’s premier robot championship, the win was particularly sweet as the German team – one of the giants of the game – have been UNSW’s arch-rivals for the past five years. “They’ve always been in the top three and always a very strong team. Last year, we beat them 5-0 in the semi-finals, but they are a lot stronger now. We were seriously nervous to play them.” 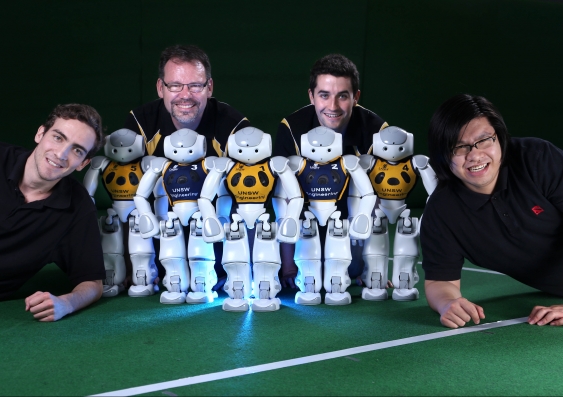 The winning UNSW team and their five-robot squad, winners of the RoboCup World Championship 2015.

The UNSW team was defending their 2014 World Championship title, having won that year again the Leipzig University of Applied Sciences team in the final and the B-Human team from Bremen in the semi-finals.

RoboCup is an international competition that fosters advances in robotics and artificial intelligence. The premier category is the Standard Platform League, in which squads compete on an indoor soccer court with identical robots operating entirely autonomously. This year’s final is being fought with the Nao series, a 58-cm humanoid robot produced by Aldebaran Robotics in France.

The UNSW robots are now recharging their batteries, having given their all for the tournament – with one draining its batteries and toppling over before the game had finished.

The UNSW team entered the finals following a convincing 6-1 win against the University of Chile in the semi-finals, and a 7-0 against Taiwan’s NTU RoboPAL from National Taiwan University. “We were pretty well in control of the game, and never really looked like losing,” says Harris.

The awards ceremony will be held in Hefei at 6pm AEST. 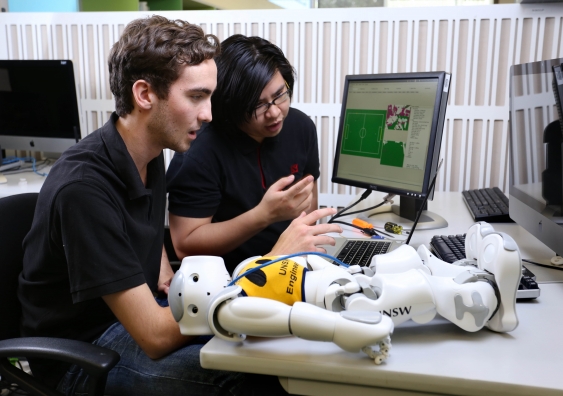 UNSW students programming one of their Naos for the the RoboCup World Championship 2015.