In spite of some recent positive actions, Australia still lacks a comprehensive and long-term plan for the STEM sector. 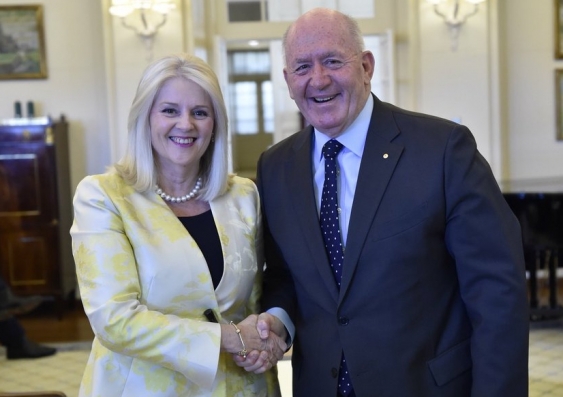 Karen Andrews is congratulated by Governor-General Peter Cosgrove after being sworn in at Government House as the Minister for Industry, Science and Technology. Source: Twitter @karenandrewsmp

It’s almost a year since Australia had a named science minister in Cabinet.

Now the role has been revived, following a weekend ministerial reshuffle after Scott Morrison became the new Australian prime minister.

Karen Andrews was sworn in as Minister for Industry, Science and Technology, joining the cabinet for the first time.

The incoming minister is likely to be a strong advocate and effective representative for the science, technology, engineering and mathematics (STEM) sector. She should have solid support from some key members of cabinet who have a track record of supporting STEM, such as Josh Frydenberg (Treasurer), Michaelia Cash (now Minister for Small and Family Business, Skills and Vocational Education), and Greg Hunt (Minister for Health).

But this is a complex portfolio and as a new member she will need to work hard to build cabinet-wide support for solutions to key challenges in the sector.

Andrews is the Member for McPherson, an electorate in southern Queensland. She has held the seat since in 2010, joining politics as a graduate of mechanical engineering and following a career in human resources and industrial relations.

During her eight years in parliament, Andrews has shown an avid interest in science and technology.

She has attended Science meets Parliament for many years and participates in Science and Technology Australia’s STEM Ambassador program.

Andrews has promoted the value of STEM education, voiced her support for the potential for nuclear power for Australia, and publicly encouraged vaccination.

In a recent interview she said:

I am very keen that my parliamentary colleagues understand science, technology, engineering and maths and the importance of evidence-based decision making. We all need to make sure we are making decisions based on evidence, not opinions.

We need a better plan

Despite some recent positive actions, Australia still lacks a strong, comprehensive and long-term whole-of-government plan for the STEM sector.

The government showed support for STEM with the release of its National Research Infrastructure Investment Plan, additional funding for supercomputing facilities, and through the establishment of the Medical Research Future Fund.

Given the excellent returns on investment in research and development, it is crucial that similarly bold, and long-term, approaches to investment in both basic and applied non-medical scientific research are soon to follow.

As an #Engineer, I know we need more #MoreWomenInSTEM. https://t.co/9guiCfkeYr

It has been noted that while around $2 billion has been saved over four years by the government’s changes to the research and development (R&D) tax incentive arrangements, none of that saving has been put towards the recommended premium on industry R&D partnerships with public research institutions.

The sector still faces many challenges in increasing equity, diversity and inclusion. The government has shown support for women in STEM, through the women in STEM and entrepreneurship grants scheme and re-funding of the Superstars of STEM program.

However, we can do more to reduce harassment and bullying – and to support Indigenous scientists, LGBTQIA+ scientists and those from culturally and linguistically diverse backgrounds.

I hope to see expansion from the government’s vision outlined in the National Science Statement that outlines a role for the sector more broadly, along with clear and measurable priorities and goals. This will allow Australian science and technology to move forward with more confidence and purpose.

Similarly, it’s important for Australia to address a shortage in STEM skills, an issue that was highlighted by Andrews in 2015.

Science, technology, engineering and mathematics are predicted to be the fastest growing industries globally (it’s estimated up to 75% of the fastest growing occupations will require STEM skills), and Australia has to prepare accordingly. We must reverse our declining participation and performance in STEM subjects.

Finally, it’s important that as the spokesperson for science and technology in cabinet, Andrews is a bold and brave advocate for policy informed by evidence.

In a 2009 speech by the then Productivity Commission Chairman, Professor Gary Banks, emphasised the importance of evidence-based policy, especially in regard to long-term and complex environmental, social and economic challenges.

Instances such as the Higher-Education Contribution Scheme (HECS) and the shift to inflation targeting monetary policy are just two examples of long-term policy being developed from a strong evidence base. It is clear that further investment in evidence-based policy formation is required.

With a new minister, and a new voice in cabinet to promote science and evidence, I am more optimistic about the future of Australian science and technology.

Having a representative that is qualified, demonstrably passionate, and who is engaged with the STEM sector at all levels, gives us hope that we will see visionary leadership and strength from the Member for McPherson.

I look forward to continuing to work with the government to make STEM a top priority for Australia, and ensure that our scientists and technologists play a key role in the nation’s future environment, health, wealth and wellbeing.

Emma Johnston is Professor and Dean of Science at UNSW.